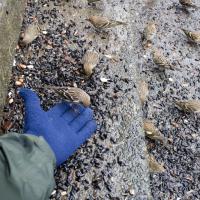 Lately many Pine Siskins (Carduelis pinus) have been taking advantage of sunflower seeds Connor has been putting out this winter. 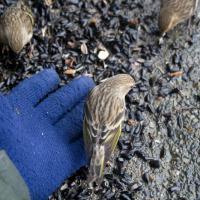 The birds are wary of any rapid movement, but if you sit still, they don't seem to perceive you as a threat. 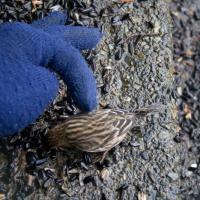 The siskins are also tolerant of very slow movements, and even a little contact. 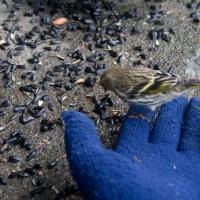 When I put my hand out, they treated it like it was just something else laying on the ground. 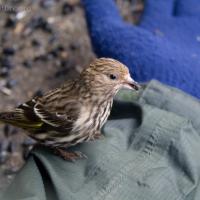 It was not unusual for a bird to perch briefly on my arms or legs, as well. 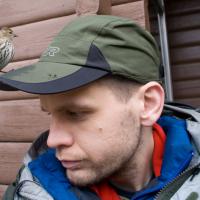 Occasionally a siskin would land on my head, though it was somewhat difficult to get a properly framed self-portrait. 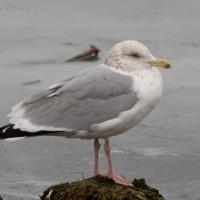 This Herring Gull (Larus argentatus) seems quite small. I think it is probably a female. 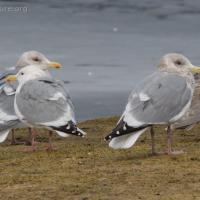 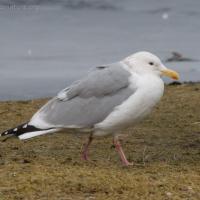 I think this is a Thayer's Gull due to the relatively dark iris, nearly black upper primaries and pale under primaries. However, I'm not sure I can rule out a hybrid (GW x Herring). 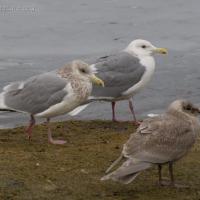 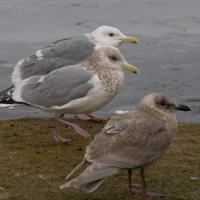 The Glaucous-winged Gull in back h as fairly dark primaries. Given the relative size between it and the the (presumed) Thayer's Gul in front of it, I wonder if the G-w Gull is a female and the Thayer's a male (or perhaps a hybrid?). 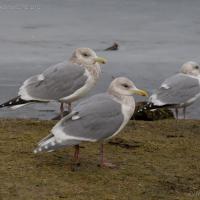 Glaucous-winged Gull in front, Thayer's Gull (or hybrid?) behind and a small (female?) Herring gull furthest back and to the right. 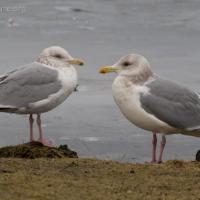 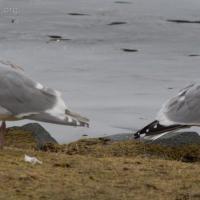 Glaucous-winged Gull on left, Thayer's Gull (or hybrid?) on right. 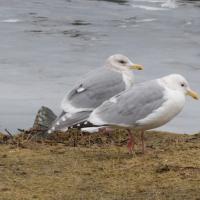