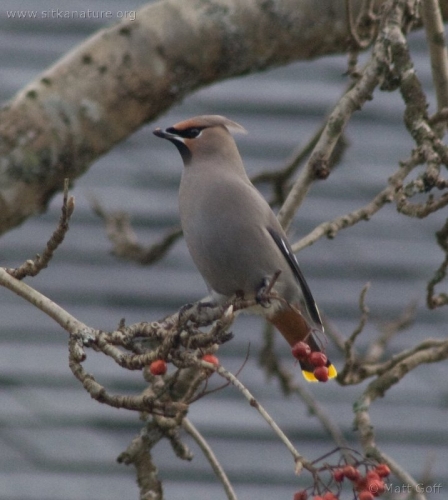 Rowan and I were riding down Biorka Street and approaching the intersection with Park Street when I heard a chirring call that sounded familiar. It took me a moment to locate the birds crossing the street above and in front of me to land in the top of a spruce tree. The light and angle were poor for a good look at the birds, and I had decided not to bring my binoculars and camera (which I typically take all the time), so I was not absolutely sure they were waxwings at first. Still, the call of waxwings is pretty distinctive, so I was pretty confident. Over Rowan’s mild protestations I waited for a few minutes to see if they would fly to a nearby Mountain Ash tree where I could get a better look at them and confirm their identity. Finally they did cross the Park Street to a Mountain Ash tree with many berries still remaining on it. There was also a Raven in the tree eating berries, and they seemed a little bit wary. They did not stay long before flying again to the top of a tall alder tree. By this point Rowan was becoming more insistent, and I did not have my camera or binoculars anyway, so I decided we should probably just go home.

I thought Connor might be interested in looking for birds after school today, so I picked him up from school. After a stop by Swan Lake, we walked down Degroff and crossed over to Park Street. At the corner of Park and Biorka, I started hearing the waxwings. A few flew up from the corner Mt. Ash to join others at the top of a tall alder just down the street. Connor and I sat down at the edge of the road to see if they would come back. After a few minutes of waiting, first a couple, then a few more, and finally the whole flock of about 20 birds flew over to the Mountain Ash tree and started eating berries. They did not stay long, flying back to the same tall alder after getting spooked by a couple of cars (including one kind of noisy one) that appeared at the intersection together. Connor agreed to wait a little bit longer to see if they would return. Our patience was rewarded as they followed the same approach pattern as before, first a couple of birds, then a few more, and finally the rest of the flock returned to the Mountain Ash tree. I was able to get a pretty good look and a few pictures of a few of them on this visit before they retreated back to the same tall alder. Though I was not sure after the first sighting this morning, all the birds I saw this afternoon were Bohemian Waxwings rather than their similar (but rarely occuring locally) relatives Cedar Waxwings.

The behavior I observed today made me wonder a little bit about the foraging strategy for these birds. On occasions in the past I have seen lone Bohemian Waxwings moving fairly rapidly through an area, but not without stopping briefly. It was almost like these individuals were scouting around. Those observations made me wonder if flocks will have scouts out looking for food sources which then inform the flock if any good food sources were discovered. Today’s behavior only reminded me of those previous observations because of the way only one or two birds first flew to the tree where they were eating berries. 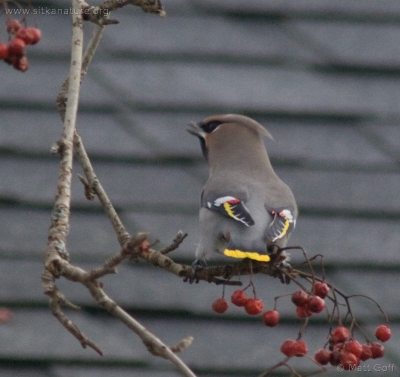