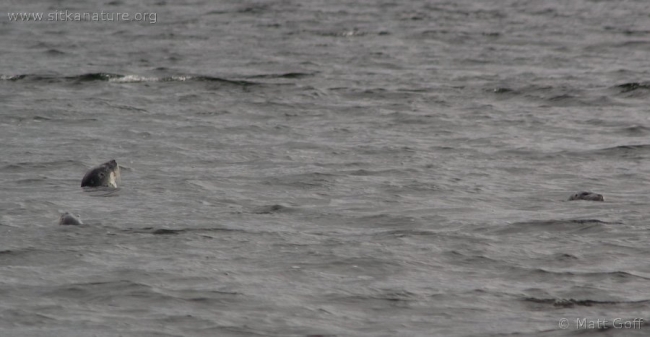 Back on the first of October, I mentioned seeing interesting Harbor Seal behavior while at Totem Park.

The photo above shows three of the 5 seals I saw in the same confined area while at the park that day. Though it is not possible to tell from the photo directly, the water they are in is no more than 10 feet deep, and probably closer to 5 or 6 feet. One of the seals is shown holding its nose pointed up out of the water and into the wind. At various times at least three of them did this, and that is what caught my attention.

After an experience in Summer 2006 where seals unexpectedly climbed up rocky islets and the later realization that it was due to Killer Whales in the area, I have tried to keep in mind that, as prey of rather effective hunters, seals must be quite wary, lest they become lunch in a possibly lingering and presumably painful fashion. So that is what came to mind as I observed behavior that very much reminded me of other terrestrial mammals testing the breeze with their nose. In the days that followed, I heard of at least two different reports that Killer Whales had been seen near town over the same time period. Though the sightings I heard about were not in Eastern Channel or closer to the park, the Killer Whales in local waters range widely, often entirely out of Sitka Sound, so it would not be surprising at all for them to be move several miles over the course of hours and days.

An important question that needs to be considered is whether seals even have a decent sense of smell. If not, then it would seem quite unlikely that they were smelling the breeze. Though hardly authoritative, a quick Google search turned up several sites that said Harbor Seals do have a very good sense of smell. This was typically mentioned in the context of a mother’s ability to smell her pup, but I can’t imagine the sense of smell would be so specialized as to only apply in this context.

Finally, there is also a question of whether or not Killer Whales give off an odor that the seals could identify on the breeze. I have never been near Killer Whales when they are breathing, so I do not for sure. It seems fairly likely that they do, however. Humpback Whales certainly do and it’s not clear to me why they would by Killer Whales would not. Perhaps someone who has had close encounters with Killer Whales can leave a comment about their breath.

While interesting, none of this really proves in any way that the seals I saw were sniffing out Killer Whales. Certainly they hang out in the shallows fairly often. I do not remember seeing them stick their noses up before, but then there are lots of things I miss. Still, the evidence seems suggestive to me, and I will certainly keep my eyes open for Killer Whales if I ever see seals acting like this again.