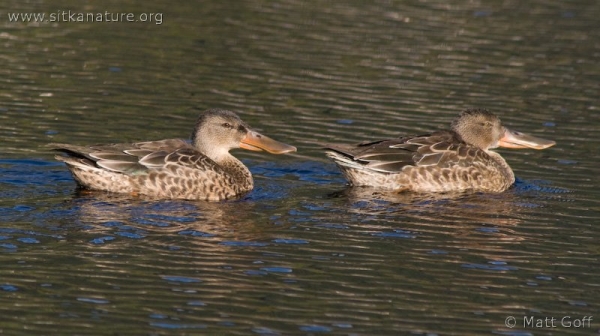 I did not manage to make time to do entries for the last few days, so I’m putting them all into one. Instead I was working on species pages for birds. I worked up a format and did several species. For now, links can be seen on the side, but eventually there will be too many, and I’ll have to figure out something else.

Weather: Monday was mostly cloudy. Tuesday was breezy with partly to mostly cloudy conditions and cool temperatures. Wednesday was partly cloudy with increasing clouds later. It rained in the evening. On Thursday (Alaska Day), there was heavy rain with some hail. In the afternoon there small breaks in the clouds with a little bit of sunshine though them. Snow level was down to 2300 feet or below on Thursday as well.

Birds:
Monday at Swan Lake: Green-winged Teal, 3 Northern Shovelers, an American Cook, Cackling Goose, and some scaup.
At home there were Varied Thrushes about and some Dark-eyed Juncos.
Later in the day at Swan Lake and Moller Park I saw 2 Green-winged Teal, at least one Ring-necked Duck, 4 American Wigeons, a Brown Creeper, Wilson’s Snipe, American Pipits, and heard a Northern Flicker. At Thompson Harbor there were gulls and a Song Sparrow.

Tuesday morning there was a Canada Goose on the Sheldon Jackson quad. At Swan Lake I saw a Northern Shoveler, American Wigeons, scaups, Cackling Goose, and heard a Steller’s Jay. At home there were not as many Varied Thrushes as the days before.

Wednesday at home there were more Varied Thrushes again. I also noticed a couple of Song Sparrows along the rocks at Crescent Harbor.
A quick afternoon trip through Totem Park was quiet, with a few gulls up the river, Mallards, a Winter Wren, 2 scaups, a few Harlequin Ducks, some Harlequins and/or Scoters off the end of the park.

Thursday at Swan Lake I saw a Cackling Goose and American Coot. There was a flock or two of geese that flew over as well.

Other Notes At Totem Park Wednesday I saw a Harbor Seal just off the beach.