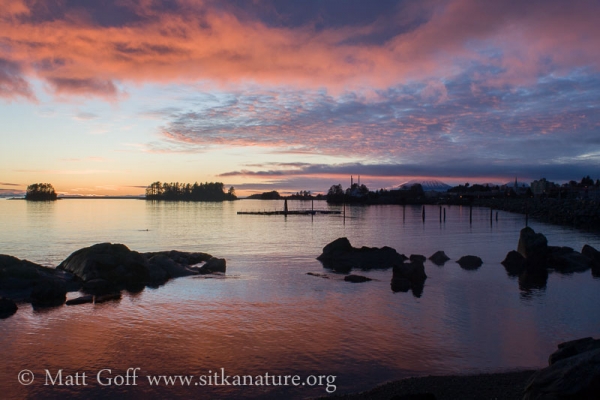 I have the impression that in addition to the timing, the character of sunsets changes throughout the year here in Sitka. Of course seasonal changes have corresponding shifts in prevailing weather patterns. As we watch from town over the months between winter and summer solstices, the changes from mid-afternoon sunsets in the southeast over Sitka sound, progressing toward the north behind Mt. Edgecumbe, and finally the 10pm sunsets in the northwest, where we don’t really see the sun actually set but sometimes are rewarded for our tolerance of overcast conditions by eruptions of color as the sun drops below the cloud deck and paints it in brilliant pinks and purples.

The photo that accompanies this post is from one of those winter sunsets that I am often compelled to watch in hopes of catching a green flash. Perhaps because it’s more likely to be cloudy over the ocean than the land, but it’s not so often that these ocean sunsets are accompanied by extensive colorful clouds. I think it was for this reason that early February sunset back in 2010 is one that has stuck with me. I remember being excited to watch it develop at the time, and although I might not have been in the optimal place for taking pictures, I still enjoyed just snapping some shots to document what I was experiencing. I think I was not the only one, as I remember seeing other photos of this sunset posted on facebook in the following days.