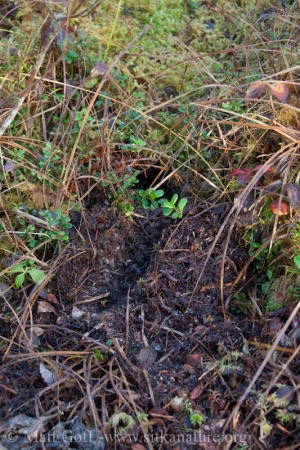 On more than one occasion this year, I’ve noticed much greater levels of vole activity than I have seen in previous years. I’ve hiked up Bear Mountain the last 4 years, and this year the vole runs extended much higher, with much more wear than I have noticed in any of the past hikes. I even an saw one scurrying up past along a rivulet up in the rocky alpine where vegetation (including the ground covering heathers) was very sparse. On the bowl at Harbor Mountain (right up from the end of the road), there were many runs criss-crossing the slope as well as many other runs in the mixed meadow and mountain hemlock subalpine areas. Finally, there were several long runs in just the small section of Indian River Valley muskeg I visited a couple of weeks ago (the pictures included with this post are from that trip). I’ve been visiting this muskeg at least once most years for over a decade, and I do not ever recall seeing such runs in the past. There is of course the possibility that I just overlooked them, however I remember noticing vole runs in the alpine on some of my earliest hikes up there as a teenager, and the muskeg runs are quiet similar, so I suspect I they were not there in such abundance.

Small rodent populations are known to go through boom and bust cycles in some locations, though I don’t know if population dynamics of voles in Southeast Alaska have been studied. I have some suspicion that the recent winters with persistent winter snow have contributed to increased populations, especially at lower elevations where they may face increased predation pressure without the snow to protect them. I do not know what tends to control the population generally, predation or competition/food supply. As the only vole species, I do not imagine they have much competition from other species for resources (there are also Deer Mice, but I don’t know how much their resource usage overlaps). For that matter, it seems like there are not that many predators, either. Marten and Ermine, Western Screech-Owls as well as other less common owls, and other raptors seem like the most likely candidates. In particular, Marten studies on Chichagof Island showed that voles were a primary food source for them, so it seems likely the same would hold true for Baranof Island.

It will be interesting to see what impact the high population of voles will have overall. Presumably it’s good for the predators, and could lead to increased populations of resident marten, ermine and Western Screech-Owls. It will also be interesting to see if we have more reports of raptors that are not normally found very often here in winter, including Northern Saw-whet Owls, Snowy Owls, and Red-tailed Hawks (or other hawks). 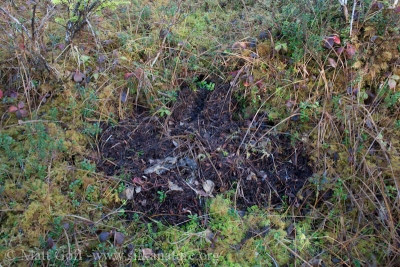