These three gulls were all photographed in February of this year, the first one was at Starrigavan, the other two at Swan Lake. 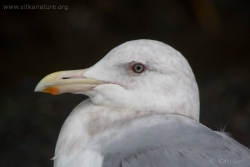 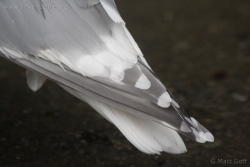 (click on thumbnails for larger view)
Unfortunately I neglected to get a whole body shot of this gull, so it may not be possible to identify it. My best guess is Thayer’s Gull, but I’m not sure I can rule out a Glaucous-winged Gull with dark wingtips. The eye and head/bill structure suggest Thayer’s Gull to me. The wingtips seem very light. Perhaps pale wingtips are not too unusual in Thayer’s Gulls, however. I’m really not sure. 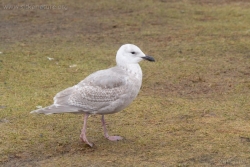 (click on thumbnail for larger view)
Structurally this gull strikes me more as a Thayer’s Gull, but the coloring seems more typical of a Glaucous-winged Gull. Unfortunately I did not get a picture of this gull with other gulls of known identification, so it’s may be a little difficult to judge size. 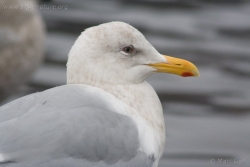 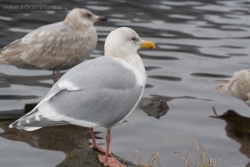 (click on thumbnails for larger view)
If I were just looking at the head, I would say my best guess is Thayer’s Gull. If I were just looking at the body, I would say Glaucous-winged Gull. As it is, I am uncertain. One striking characteristic of this bird is how bright yellow the beak is (that stood out at the time compared to other gulls as well).