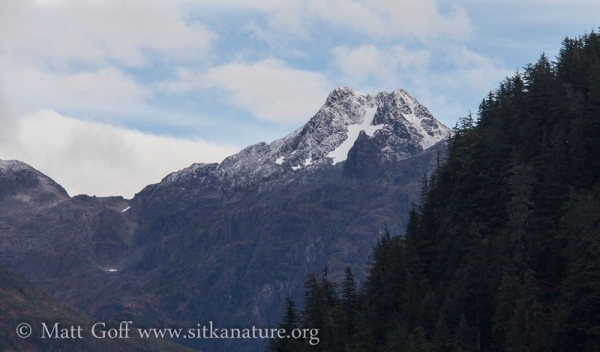 Although the official name (that’s on the maps) is apparently Cupola Peak, Cross Mountain is what I’ve always heard as the name of the distinctive mountain that stands beyond Bear Mountain above Silver Bay. Rising from the ocean to a summit nearly 4000 feet high, the peak is also only about a mile distant from similar elevations on Bear Mountain, though between them lies Medvejie Lake at less than 250 feet. A steep-sided valley that might be better described as a canyon, I suppose.

From town in the summer, the patch of permanent snow just below the summit takes on a very cross-like appearance which presumably is what has led to the common name. The actual snow field is not quite that shape, but a secondary peak in front blocks part of the snow, creating the lower indention that makes creates the cross shape. In the fall view from Silver Bay (seen here with this post), the front minor peak is clear, but the other side of the cross appears stubby due to lack of snow.

I’m curious whether there is a glacier in the cross, though unlike on nearby Bear Mountain, I’ve never noticed ice appear from under the snow during the fall. I’m also curious how old the snow is up there. I have never seen it come close to melting out, so it seems likely that snow has persisted in that spot for centuries at least. I think there is a fair amount of year-to-year variability which is one of the reasons I think it’s worthwhile to keep taking pictures of the same scenes, even though it might seem like it’s not ‘new’. I also think it could be interesting to compare the extent of the snow during summer/fall in recent years with photos from decades past and see if there is a noticeable difference, and of course that will be true in the future as well, so hopefully I (or someone after me) will be able to use these photos to compare with conditions at a future time.

If anyone knows of (or has) some photos from the past that I could use for comparison purposes, I would be interested to know – please leave me a comment. 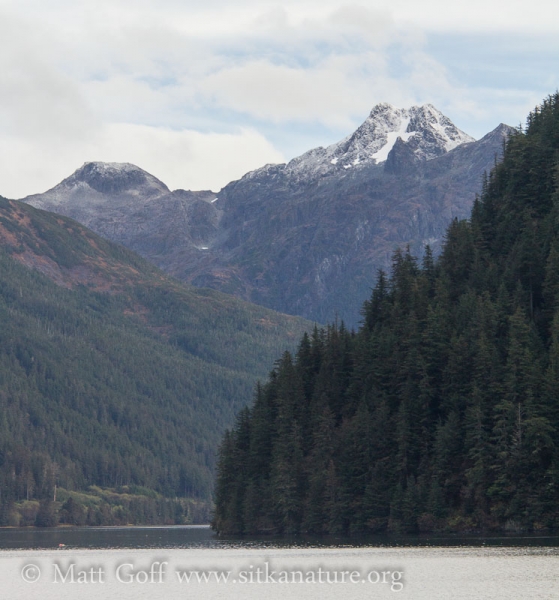