Purple Monkey Flower (Mimulus lewisii) is a plant with showy pink flowers that ranges from California to British Columbia and Southeast Alaska, over into the Rocky Mountains. I was excited to see this plant for the first time back in 2008 when I was doing some work in the Blue Lake watershed. There it was growing in a couple of places along stable gravel and sand bars. Since that time I’ve seen it a couple of other places, once at Rezanof Lake and then again along the river in Red Bluff Bay. On both occasions it was growing in similar gravel bar habitats. According to the wikipedia article for this species (there is not yet an FNA species account published), the habitat is similar throughout the range, with an emphasis on montane locations.

Elsewhere on Baranof Island, this species has been reported from the headwaters of Maksutof River (which drains into Rezanof Lake – so the same watershed as where I’ve seen it, but significantly higher up), Lake Diana, and in the Lucky Chance area. More generally, the only other collections made in Southeast Alaska are from the mainland near Hyder. I was vaguely aware that Purple Monkey Flowers are not exactly common in Southeast, but it was only recently that I took notice of the apparently peculiar distribution. 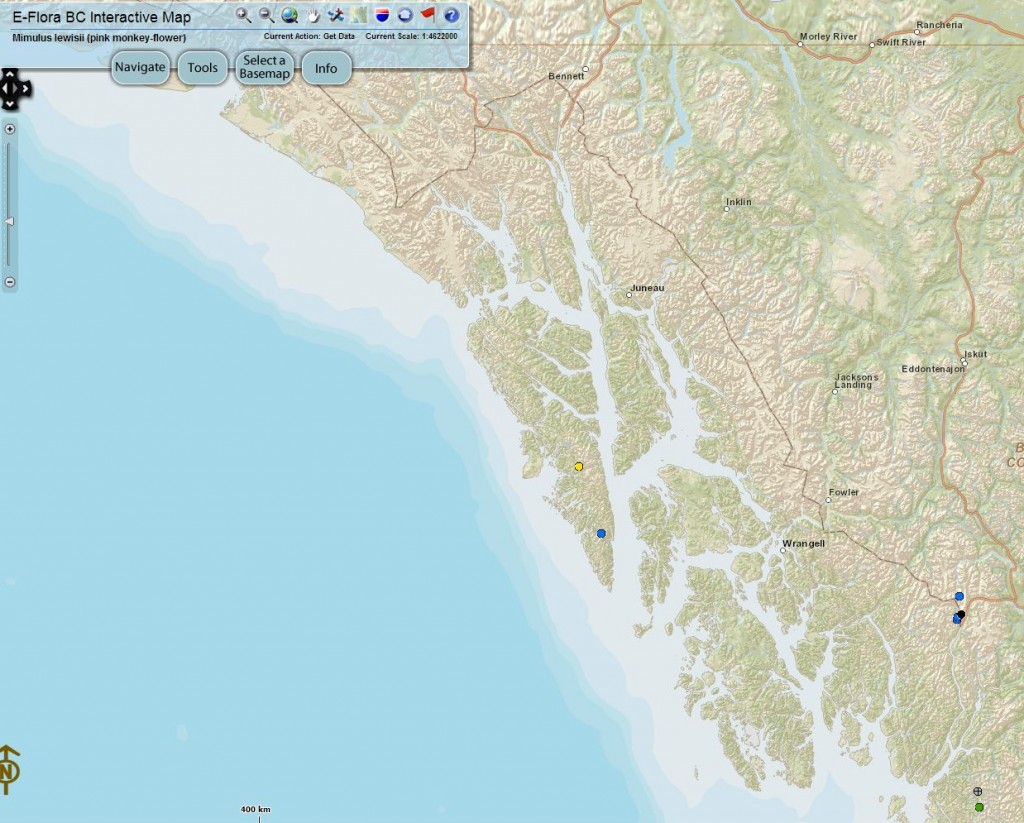 A recent conversation (related to a talk about crossing Baranof Island (along a route that included Rezanof Lake) prompted me to take another look at the distribution a little more closely. I was struck by the lack of observations in Southeast, initially not noticing the Hyder collections. The Blue Lake records are easily the most northern. South of Hyder there are scattered collections through BC in the Coast Range and additional sites in the Rocky Mountains south of Prince George.

It seems likely that this species can be widely found throughout the Coast Range at least as far north as Prince Rupert and Hyder, but I imagine accessibility is challenging and so collections might be under representing the true extent of the occurrence of these flowers. Arguably the same could be true in Southeast Alaska, however I think there are at least a couple of reasons to think this might not be the case. Purple Monkey Flower has been considered a rare species in Alaska, it is also quite showy. That being the case, it seems likely that if any botanical worker had run into the plant, they would have collected it. The locations where it has been found on Baranof Island are not particularly difficult to access (at least not any more so than most other Southeast Alaska locations), so while there’s the possibility that it’s hidden away in other Southeast locations (in particular, on other islands), that seems less likely than for other species which tend to exclusively favor high alpine areas that are much less easy to get to.

If the distribution as currently understood based on the collection record turns out to be close to the reality, it makes me wonder how they could come to occur on Baranof Island, but not the inner islands between Baranof Island and the nearest other occurrence. One possibility that comes to mind is that the Baranof Island population is a relict of the last ice age. If this is the case, wonder if it would show up in the genetics. At this point I suspect there have not been any genetic studies done that included specimens from Baranof Island (though I did see at least one mention of two genetic groups within this species, one in the south – Sierra Nevada range in California – the other including the Rocky Mountains and Pacific Northwest). Perhaps at some point the question will be investigated. I think it could be another piece in the puzzle of what species, if any, might have persisted in refugia along the Southeast Alaska coast during the last ice age.