Last year I had the idea that it might be interesting to place temperature loggers at various locations around the Sitka area in order to get a better sense of the temperature variation around town. (A more complete write up of the project idea is available at the Area Temperature Variation page.) To that end, three ibuttons were placed in Starrigavan Valley last December. Last week I retrieved the ibuttons and got my hands on some data for the first time.

One placement was in the valley bottom, and the other two at the upper edge of the clearcut on the north side of the valley (a south facing slope about 300-400 feet above the valley bottom). One was placed in the clear cut, the other at the edge of the old growth. There was very little difference between the clear cut and old growth placements, so I only included one of them in the following observations. It would be nice to place one on the north facing slopes on the south side of the valley, but access is more difficult, and that’s not happened yet. 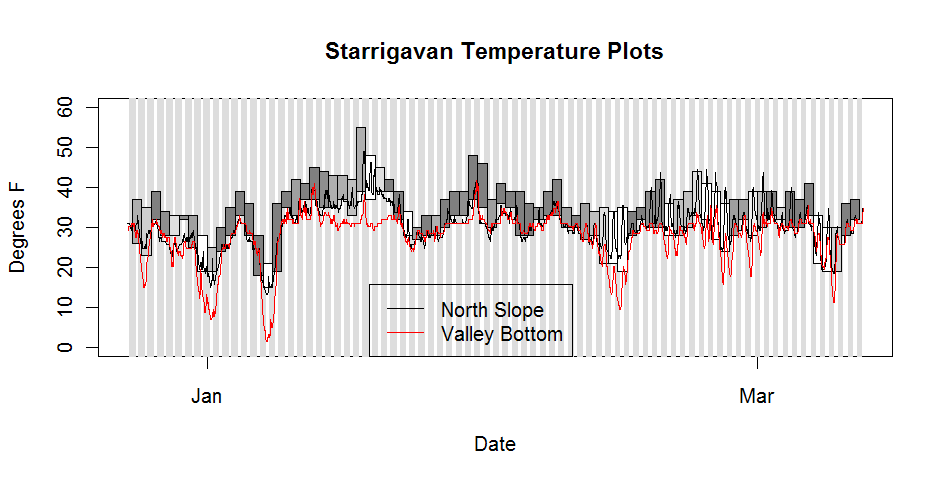 In the plot shown (click for a larger version), the two lines are the temperature records from the ibuttons. The light gray vertical stripes indicate darkness, and the boxes are based on the official daily highs and lows (based on the weather station at the airport), with shading determined by the reported cloud cover (white is clear skies, dark gray is overcast).

Based on personal observations, I expected temperatures at Starrigavan to be colder than those at the airport, and this was fairly consistently the case, especially for the valley bottom. It was interesting to see that on many days, the slope temperatures were actually not too far off the airport temperatures, and tended to be less variable.

One of the most striking things about the plot is just how much colder the valley bottom gets compared to the slope, especially during clear weather. I have read about katabatic winds and the pooling of cold air in valley bottoms, but it’s still interesting to see how strong the effect can be. It might be intersting to have several placements along the slope to determine how thick a layer of cold air tends to develop and how sharp the transition is between it and the warmer air above.

It’s not unexpected that daily lows tend to occur just before dawn, with highs in shortly before sunset. However I found it interesting that this was not always the case. In particular, the highest temperature recorded in the period occurred after sunset and was presumably associated with a warm front moving in. The correspondence between daily temperature variation (the difference between the low and the high for a day) and cloud cover is not as strong as I might have guessed, but it seems like this may be due to the use of a single value for the daily cloud cover. It is often the case that cloud cover varies significantly through the day.

All in all, I am happy with the results for far. I’m looking forward to getting data from more locations to fill in some information about temperatures around town.