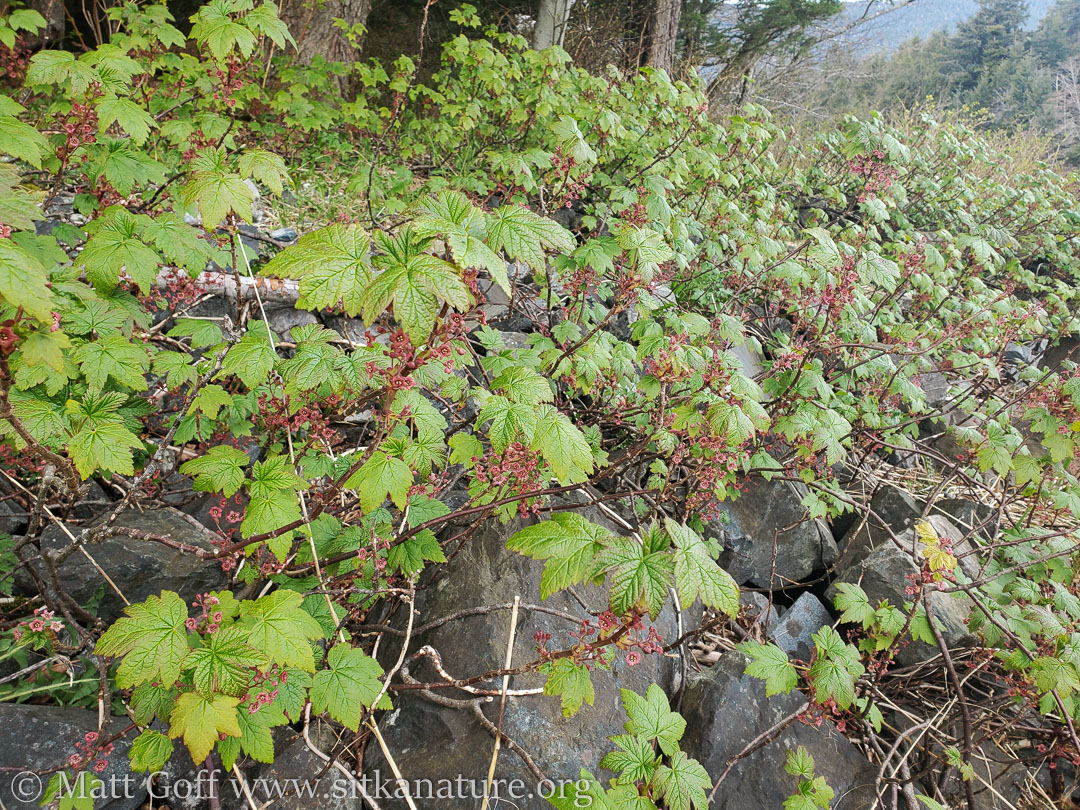 Generally overcast with a little bit of rain late in the day. Temperatures in the low 50s, but without any direct sun the wind felt chilly.

I headed down to the park around 8am.

The tide was dropping, but still mostly up.


I saw Black Turnstones and a few Surfbirds, a Marbled Godwit, and two Black Oystercatchers.

I scanned the gull flocks, but didn’t see any uncommon species.

I saw a Red-necked Grebe in full breeding plumage out on the bay. It was too far out for good photos. I would like to get closer views and photos at some point. I don’t remember seeing them in breeding plumage here before.

It appears to me this blueberry bush has been dmanaged, persumably by the cold and/or dry weather earlier in the month


I looked at more blueberry bushes today and noticed damage to several of them. In some cases entire branches seemed to have dried up while adjacent branches seemed fine. In other cases just damage to edge of leaves or flowers. Possibly a function of emergence, and different branches on the same plant emerged different times? I’m not sure if it was all cold damage, or if the abnormally dry conditions played a role.
I saw my first violet flowers of the season. Fern-leaf goldthread is still blooming.

From the park I walked over to airport.

This raven appeared to have a bit of bird droppings splattered on its back.


On my way I saw a raven along the seawalk that appeared to have droppings on its back.


Along Sealing Cove a flock of Golden-crowned Sparrows passed through in the opposite direction I was going. I was on a call, so couldn’t give them my full attention, but I think there were over 20 of them.

I wonder if this cloud formation is due to wind sculpting


I watched from the old bunker by the waste water treatment plant, but didn’t see anything unusual/new that I noticed. A harrier was reported in the area today, but I’m not sure what time.

I got a message about a Black-bellied Plover at Halibut Point Rec while I was there. I couldn’t make it out there until later since I needed to walk home first.


When I went out early in the afternoon to check I did not find it. There were Black Turnstones on the rocks as well as gulls and ducks. The wind was blowing onto the beach. It seemed to me like it was coming out of the southwest.

A short time later at Starrigavan estuary, the wind coming down the valley, blowing out of the east. I’m not sure what was going on to make the difference.

I saw two peeps fly and look like they landed near the estuary pond on the upland side of the road. I went and sat by the estuary for a few minutes, but did not see them again.

I checked Magic Island on my way home but didn’t see any shorebirds there. It was less windy than the main part of the rec had been.

I spent the rest of the day at home.

The last couple of days have noticed a mild rash on the back of my hands. I have vague memories of something similar last spring (I’m making note of it here to help me remember for the future). Cow parsnip isn’t big enough for me to have accidentally gotten into (and those rashes are usually more severe for me). I think it may just be sun exposure – though perhaps there’s something I’ve been in contact with that’s contributed.

2 thoughts on “Spring Birds and Flowers”