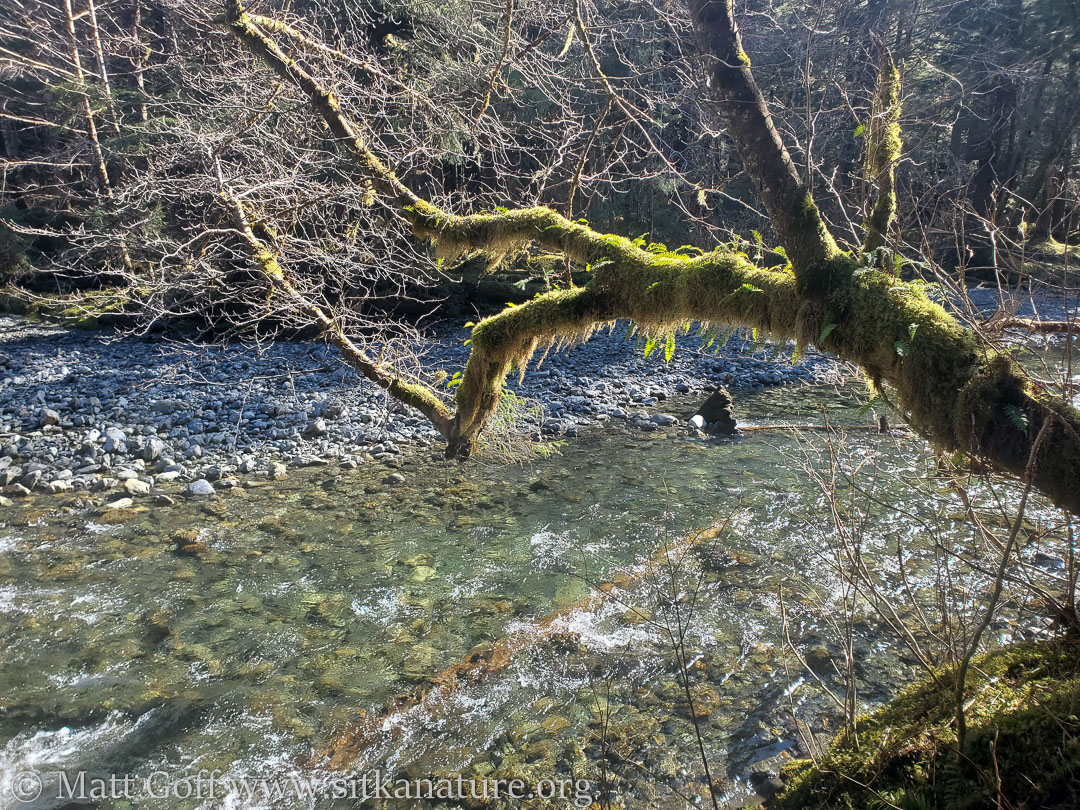 Clear and sunny with temperatures into the mid 40s. Calm to light breeze.

I made it out of the house shortly before 10am. Frost had melted off the car where the sun was on it, but still covered places in the shade.

I started up Indian River trail motivated in part because the ibuttons were due to be serviced.

The air was chilly starting out, but the sun felt warm.

Walking on the trail through the forest, I heard a few birds calling.

It was nice to catch the songs of a Brown Creeper and Golden-crowned Kinglets as well.

A Red-breasted Sapsucker drumming in the distance had apparently found a nicely resonant snag.

Patterns of ice on a forest puddle.


I saw ice in the puddles, especially where there was not as much canopy overhead.


I was up past the second bridge when I found my first fern-leaved goldthread (Coptis aspleniifolia) flower of the year. I had stopped rearrange some gear and take a short break in the sun.

I later saw it blooming several other places, though they were all further up the valley. I looked where I saw leaves along the trail lower down, but didn’t find any flowers.

I noticed a pocked of snow lingering in a protected hollow under a tree.


I was slightly surprised to see snow remaining in a hollow at the base of a tree.

The most snow remained in the transitional area between forest and muskeg. Open enough canopy for snow to accumulate, but enoug shade to keep it from melting as fast.


Much more remained in the transition area between forest and muskeg. The muskeg itself was snow free.

I had previously noticed a block of quartz in the forest that I assumed someone had found near the river and put there as part of a fire ring. I was tempted to bring it home, but never did. The past several times I’ve been up the valley, I haven’t seen that chunk, so I suspect someone else did carry it out.

This appears to be a large block of quartz. In order to be so close to the surface, I think it must have ended up there long after the forest was established (perhaps in the last 100-150 years). The question in my mind is how?


Today I happened to see a bit of quartz showing through moss in roughly the same area. I stopped to invetiage and realized it was a larger chunk of quartz, much larger than I could hope to carry. I now think the piece I saw previously had come off this one. The size of this one begs the question of where it came from, and why it’s still pretty much on the surface.

If it was deposited as the glaciers retreated and/or the river worked this part of the valley, it should have been much more covered by organic soil instead of a thin layer of moss. I don’t know of any process that would have lifted it up. Thinking about it now, I am curious to bring a little trowel and see if there is organic material underneath (assuming I can dig down far enough).


It’s in the middle of the valley, far away from where it could have fallen from above and tumbled to rest.

Another hypothesis I have is that it may have been left by folks who did some mining in the valley 100 or so years ago. I think their trail went along further to the east, and I’ve not noticed any sign of it right by the area where the quartz is, but it’s hard to say for sure.

The muskeg fringe ibutton was not working. Unfortunately I wasn’t able to replace it. I had spare ibuttons, but not the plastic thing they go in which I use to attach them to the string, nor a pair of pliers to remove the nonfunctioning one from its holder.

Moniliina cup with the blueberry it grew from.


I’m not sure how I spotted them, but I noticed Monilinia fruiting below some blueberry bushes. They seemed to be maturing despite the still frosty ground.

With an assist from crusty snow and frozen ground surface, I managed to make it to the muskeg without getting my feet wet. That was not going to continue in the muskeg so I decided to take shoes off. It was definitely cold on the feet. However, if I can get my feet dry, it always feels kind of amazing to put on dry shoes after I’ve been walking barefoot through cold, wet conditions.

After taking care of the last ibutton, I went to edge of muskeg and relaxed in the sun.

While sitting, I noticed a small group of what I think were robins fly by. They moved quickly, and I never saw them well, but did hear a brief call. A bit later, a junco flew over my head in one direction, then went back the other way.

I opted to go straight back into the forest instead of returning the way I had come.

I ended up near the little gravel bar where Connor had found nettles last year.

I poked around a bit to see if shoots might be coming up, but didn’t find any.

I'm curious which buttercup species this is. Perhaps Ranunculus occidentalis, which I mostly find along beaches. However, it may be that I've just not been upland in the right places early enough to notice it flowering.


I did see several buttercups (maybe R. occidentalis?), a cow parsnip plant, as well as some Osmorhiza and violet leaves up. I also noticed more fern-leaved goldthread blooming.

I made my way back, stopping a few times to looking at liverworts or mosses.


I revisited a pair of tall (maybe 15 feet to the top) rootwads that I’ve looked at before. I found some goblin gold moss (Schistostega pennata) where hollows had been created by soil falling out.

I hoped to see some Plectania nannfeldtii, a fungus that fruits in spring, but didn’t find any.


I continued my routine of measuring water temperatures in each fork.

The ground level temperature stabilized around 64F in direct sun. Much warmer than the 48F air temperature.


I got curious about ground surface temperature where it was in the sun. When I shaded the ground, the temperature dropped fairly quickly. Left in full sun, it seemed to stabilize around 64F.

Once again I considered trying to snorkel for the afternoon low (at 4:30 today). It went down to -0.4ft, but I didn’t make it out.

We had a good turnout at ultimate this evening. I enjoyed tossing during warm ups as the sun set.

Today I made more progress on last year’s observations. I have about a dozen days with observations left. Three or four of them have many observations, but the rest only a few.