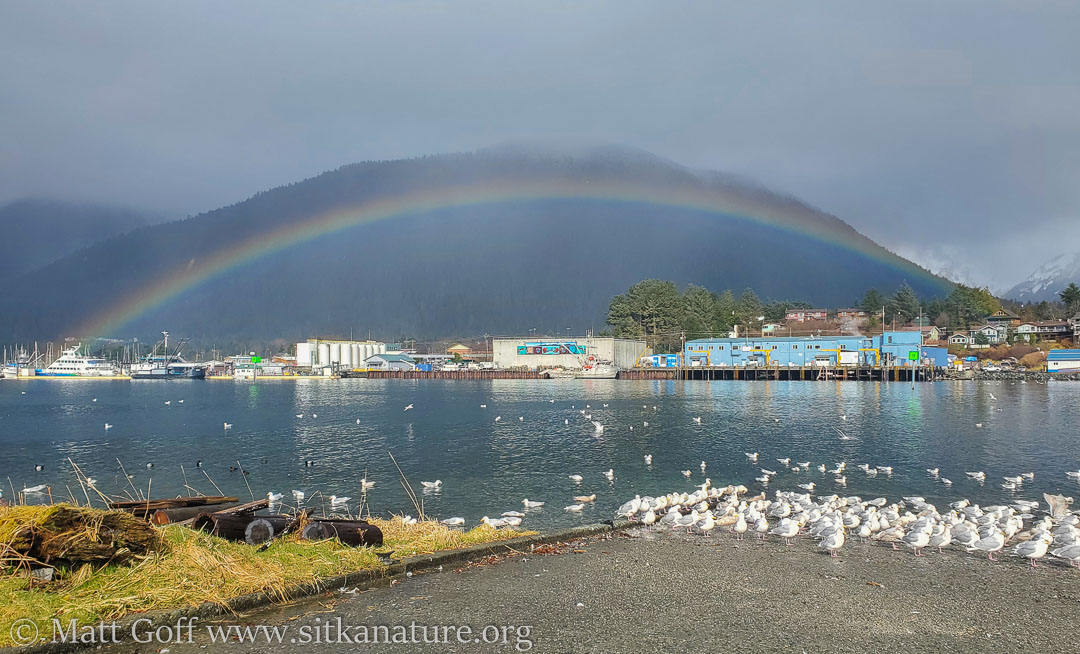 Mostly cloudy with occasional showers. Later in the day breaks between showers including a bit of sun shining through. Winds calmer than yesterday, and temperatures in the 40s.

Today was daylight length was 11 hours 59 minutes (as close to 12 and 12 equilux as we’re getting). It’s the last day with more darkness than light until next fall.


With an assist from daylight saving time change, it was still light when I was out after 6pm today.

Flock of gulls resting on the ramp


The channel was not quite as busy as yesterday when I stopped by early this afternoon. I still had many hundreds of gulls to look through.

I did not stay as long today, and did not see any I was confident were more unusual species on my first visit (but did document a couple that raised questions for me). I saw one California Gull on a second visit, just before a coast guard helicopter flyover flushed most of the gulls off the ramp.


A nice rainbow broke out across the channel after a rain shower had moved over.

I spent time at Swan Lake hoping to get photos of the possible Eurasian Wigeon. She was feeding on the grass with an American Wigeon while I watched.


If I had realized soon enough that a couple with a stroller were crossing the street to visit the lake, I might have had success. Instead, I was moments late, and just got a blurry shot of the wigeon from the wrong angle and half out of frame.


Midges are out and swarming at the lake.


I noticed ducks were eating them opportunistically as they happened to swim by one near the surface. They did not seem to be working too hard to go for them specifically.

Greater Scaup at the edge of Swan Lake


A few scaups have shown up on the lake. There are still quite a few in the channel. I suspect the lake scaups have moved from the channel, but it’s possible they have come from elsewhere.

Ravens were doing their aerial acrobatics/flight dancing up over Gavan Hill and tried to get some video of it. A good (tall) tripod would have been helpful.