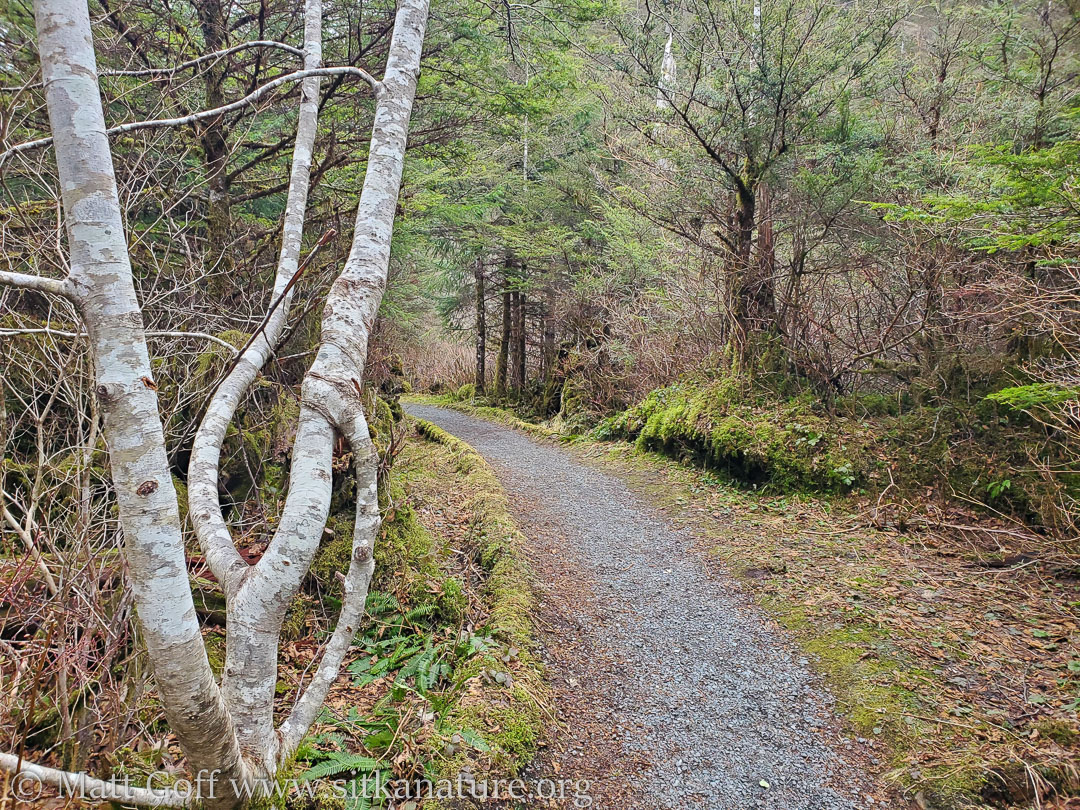 I think this is Bazannia tricrenata, a liverwort. However, I've not yet confirmed the ID.

Overcast and breezy in places. Temperatures in the 40s.

With an assist from the time change, I got off to a slow start today.

I headed out this afternoon and took a look at the channel. The tide was up and there were more gulls than yesterday. I did not see any unusual looking ones during the few minutes I watched.

After stopping for food and checking the channel again, I had the thought to go to Thimbleberry Lake. I was curious if any birds were on the lake, and also have been meaning to get back and look at some mosses/liverworts along the trail.

I was a little surprised to see only one car at the trailhead, though another arrived just after I did.

The folks who were arriving had dogs, so I decided to wait and let them go on ahead. I figured the head start and me taking a bit longer by going up the old trail would minimize the chances of friendly dogs causing some inconvenience for me taking pictures.

As it turned out, I hadn’t gone too far up the section of old trail when I had the impulse to head off to the right and up the hill.

Dicranum mosses are abundant around Sitka. There are several species known to occur, but I still have not worked on figuring out how to distinguish them.


I spent the better part of an hour and a half wandering around and documenting various mosses and liverworts.

The forest at the beginning of Thimbleberry Lake trail is second growth. This extends a bit up the hill where I wandered. It’s getting to be older second growth at this point. There’s enough light for plenty of mosses and some understory shrubs. However, there was also plenty of rotting small to medium diameter wood on and just above the ground. It’s not so convenient for walking at times.

There was one place it looked like might have served as a campsite in the past. At the very least there had been a fire (with several old beer cans there). A nail in a tree suggested a tarp might have been set up.

At some point I would like to explore further up, and maybe traverse the hill/ridge between Thimbleberry Lake and Silver Bay. Today was not that day, however.


Instead I went over towards the creek. The hill drops steeply, and I was on my way down when I noticed a rock outcrop. I photographed and collected a couple of liverworts and a moss. I think the moss might be Bartramiopsis lescurii and one of the liverworts Bazzania tricrenata.

I managed to get across the stream without wading by using a rotten log.

After bushwhacking up to the trail, I went up to the lake. I had not noticed much wind during my time off trail, but it was really blowing at the lake.


Blueberry flowers were just coming out but not quite open along the creek and the trail. I suspect there are probably some with flowers open somewhere, though I’ve not seen any yet.

I took quick photos of a couple of epiphytic bryophytes I would like to return to along the trail. I figured the dozen or so collections I made today were plenty.

Back home I spent ten minutes sitting on the south step. I practice (multi) sensory awareness. It was interesting to try and focus on something in particular while maintaining conscious awareness of my full visual field. I found it possible to do, but easy to lose the conscious awareness of peripheral vision. As the wind swirled a bit, at times I could smell the wood my neighbors have in their driveway to split and also the smoke from a chimney along Biorka Street.

The mountains still have plenty of snow, but not nearly as much as last year


I made one last stop at the channel in the fading light before heading to ultimate. I saw fewer gulls than earlier. I also realized I hadn’t seen any Long-tailed Ducks. They seem to largely abandon the central channel when gull numbers really pick up.

Gusty winds at the field made throwing a little more challenging at ultimate this evening.

A Purple Finch was reported in a nearby neighborhood. I’ll try to keep an eye out for it in the coming days.