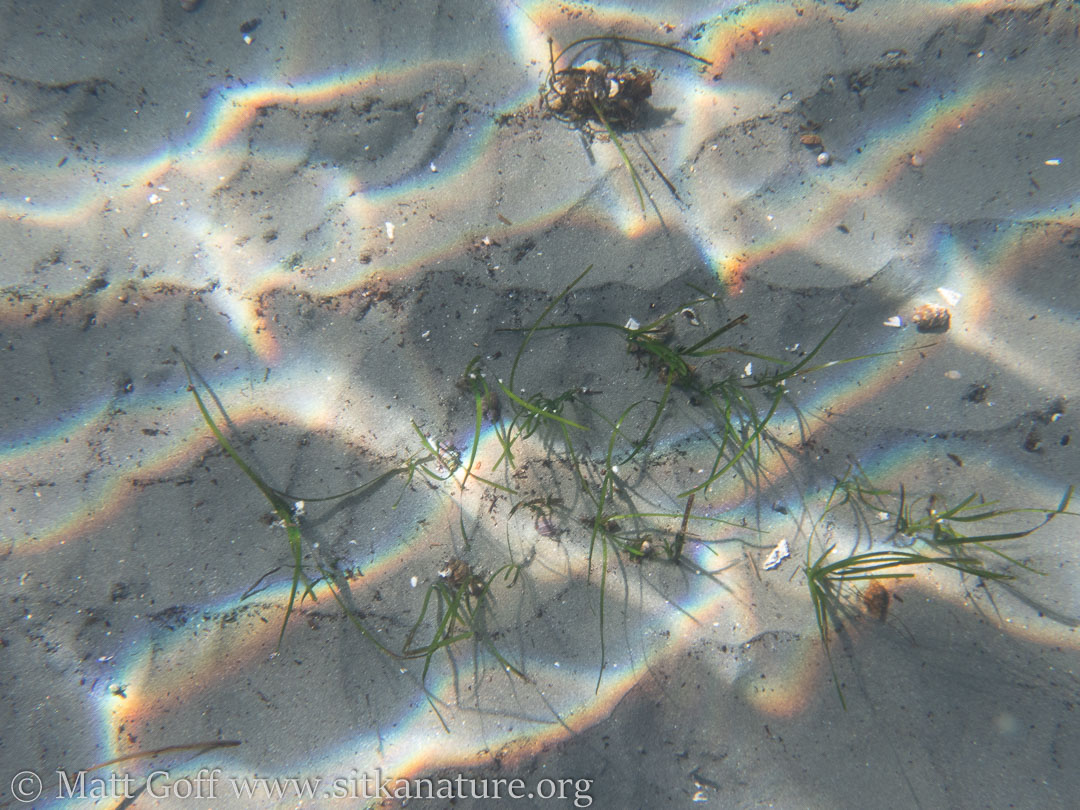 Temperatures got below freezing overnight, but into the 40s today.

I got off to a slow start this morning. I stepped outside for the first time a little after 11am. The accessible roof was in full sun, and I decided to relax there and feel the warmth.

Connor had mentioned the tide was lower than predicted, and the low was at 11:30am. I debated in my mind for a few minutes about whether to keep enjoying the warmth, or get my stuff together and go for a snorkel.

I ultimately decided to take advantage of the weather and the early season clear waters.

It’s been at least a couple of years since I last tried snorkeling, so it took me a little while to get all my stuff together. (Mostly because I didn’t immediately remember where it all was.)

Connor and Rowan ended up coming along, though just to be on the beach.

I intended to go to Sandy Beach. Even though the waves were not big, plenty of surge dissuaded me from that option. Instead I continued out to Little Magic Island. There was still surge there, but not as much, and decided to go for it.

I started in the little cove then snorkeled out ot the smaller rocks beyond the nearer prominent rocky point. I've explored all of this area (at least that gets exposed) at negative tides, but it is a different experience seeing it in the water.


Getting into the water felt a bit awkward. It just didn’t feel right to flop forward and put my face in the water. I found it easier to go in on my back and then roll over.

I’ve been finishing my showers with cold water for years now. I also routinely wade in cold water without boots (sometimes barefoot, but most often with water shoes). I think this contributed to me quickly adapting to the water where my feet were exposed. It leaked into my suit slowly enough that mostly I didn’t find that shocking either.

Although it didn’t feel like the water was especially cold, I could tell I was getting colder. It’s sort of hard to explain. I think maybe it was due to the neoprene preventing much heat transfer through my skin? I don’t know really know.

As yet unidentified sculpin. If I had remembered my net at first, I would have tried to catch this one to get better photos for ID.


I found some rocks that I started exploring. I noticed a sculpin that I tried to get pictures of. The surge was enough to keep me moving back and forth. I struggled to stay in place, trying to hook a hand or leg on a rock. With so much buoyancy, the force of incoming water lifting and pushing was more than I could overcome.

After trying for photos of the fish, I remembered I had brought a little aquarium net but left it on the shore. I went back to have Connor get it for me.

I thought it would be a simple matter to return to where the fish had been (hoping that it would still be there). As it turned out, I underestimated the difficulty of orienting while in the water.

I’m sure if I were to spend more snorkeling this place it would become much easier. However, my mind is not used to mapping out space at this scale, and things look different under the water compared to at the surface.

I did not refind the location of the fish (or if I did, I didn’t recognize the spot).

This was one of two photos out of the many I took of this nudibranch which turned out halfway decent.


Despite the constant push and pull of the water, I did manage a few photos. I wonder if having less buoyancy would make it easier to stay still (perhaps just by dropping below the surface briefly). If I keep at this, it would probably also help to have a separate light.

I also so things I couldn’t photograph. A nice heart crab was perched on a vertical rock face, but too deep for me to get to. For some other things I gave up trying to hold still enough to get the picture. (Plus my camera was working differently than I expected – I need to spend a little time understanding the settings a bit better for underwater use.)

Getting out was a bit awkward. My feet didn’t feel uncomfortable, but I think were basically numb (just not painfully so like sometimes happens with cold extremities). I didn’t want to accidentally cut my feet up on barnacles, so I kept the fins on. Of course that made for awkward walking, especially with feet that weren’t giving my mind anything but the coarsest tactile information.

I had poor dexterity with my hands, but did finally manage to get my shoes on.

Connor and Rowan had each found a couple of things on the beach during the 20 minutes or so I was in the water.

Rowan found this Ribbon Snailfish (Liparis cyclopus) under a rock


I got some pictures of those, and we prepared to leave.

Once I was out, it took some time to feel fully warm. I wonder if the best option might be some sort of exercise to generate heat?

One other thing that happened was on my way back to my exit point, I ended up going through sandy shallows where I got sloshed around even more. The sand was churning up, so I could not see much, and going through this section left me feeling not unlike when I’ve been on a boat in waters that are not calm for an extended period of time.

For me this means feeling a little off, not quite a headache, but not good either. The smell of neoprene already bothers my head, and the combination of both was worse than either separately. (Even though I took a shower when I got home, I could still smell the scent of neoprene on my skin. I think this contributed to a longer than it might have been otherwise recovery from the motion-induced disturbance.)

I am considering trying snorkeling without a wetsuit. I suspect I could build a capacity for it. Craig Foster (whose experience was featured in the documentary My Octopus Teacher) was swimming without a wetsuit in waters off South Africa that are similar temperatures to ours. I have a mutual friend, and heard a bit more about Craig’s adaptation to the cold. He apparently got to the point where air temperatures much over 60F seemed hot to him. That shouldn’t too much of a problem for me here.

I checked the channel this afternoon, but didn’t see too many gulls yet.

One swan is still at Swan Lake.