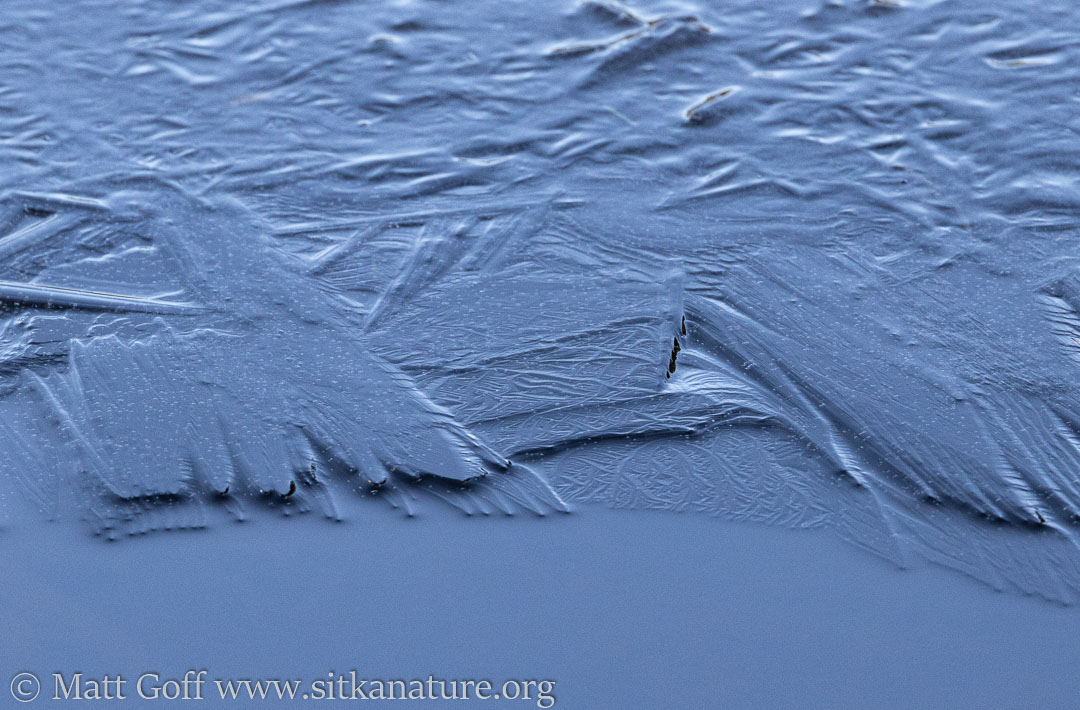 Clear and chilly. Temperatures into the 20s overnight, rising to lower 30s today.

Winds varied from calm to gusty. As it turned out, I timed the strongest winds out of the southeast on a walk down to the park late this morning.

Although temperatures hovered near freezing, I correctly figured the sun would feel warm, and skipped bringing gloves. Conditions were calm at my house. According to the weather record near the time I was leaving, it was calm at the airport as well.


By the time I got down to the harbor a bit later, I noticed a bit of a breeze. Ice had formed in parts of the harbor. Between some fingers there was a continuous layer of ice, and others seemed to have little or no ice.


Out at the end of the park, it was blowing pretty good out of Silver Bay (the airport registered SE 14 mph at this time). Even with hands in my pockets, they got quite cold.

Winds shifted to the northwest this afternoon, but only around 5-8mph.

White-crowned Sparrow hiding out in a spruce tree. The first I saw this year.


I picked up several species for the GBBC, including my first White-crowned Sparrow of the year. I noticed it peaking out of a spruce tree on Etolin Street.

I did not see Black Turnstones or Surfbirds, which I hoped to find on the beach at the park. I’ve noticed their absence this winter during chilly weather. I can’t remember if that’s been the case in other years as well.


The tide down 1.86ft relative to predicted. Had this happened during a low predicted tide, it could have easily made the lowest tide of the year.

Song Sparrow (holding a seed, perhaps) below the viewing shelter at Starrigavan.


Rowan joined me for a trip out to Starrigavan. We did not see any shorebirds there either. People were on the beach with dog where they often hang out, so I didn’t look too hard. We did see a kingfisher.

I made brief stops by the airport and channel. The airport lagoon is mostly filled with ice. (I had earlier noted that Crescent harbor had ice between some fingers, but not others, though I’m not sure why.)

I dropped Rowan off and headed to Thimbleberry Lake. I added another one to the pile of lessons that it’s best to get pictures when you see them. It’s often not the same (nor better) when you return.


In particular the ice had changed. The lake was still open around the edge, but the longer crystals that caught my attention yesterday were gone. I am curious if they melted, though that seems unlikely since there was much more ice around today compared to yesterday. Perhaps the solid ice formed out further and surrounded them, but new long crystal growth was supressed for some reason (maybe wind?).

The other motivation for going was some liverworts I didn’t stop for yesterday. Today they were covered in ice, so I’ll have to wait for another time.


The five Trumpeter Swans had moved to the lower end of lake and were feeding in the shallows near the shore.

Looking towards Lucky Chance area from below O'Connell Bridge


Around 5pm there were enough clouds to the west that I had no real hope of seeing a green flash. I went out for sunset anyway. I wanted to see where sun was setting, as we’re getting to the time of year when green flash season is over until fall. From what I could tell, the sun set behind Mahknati Island from the perspective of the bridge. It’s maybe a week before it’s setting behind Kruzof.


Later this evening Connor messaged about a Great Horned Owl calling. From what he told me, it seemed consistent enough to take a chance. I went and was able to get recordings. I tried to get a look at it, but I think it was higher up in the canopy and obscured by lower branches.

As I moved around trying to locate it, I kept having the experience of hearing it in a certain direction. When I moved over to where it sounded like, it then sounded like it was where I had been. I think this happens when it’s almost directly overhead, and possibly influenced by it facing different ways when it calls.