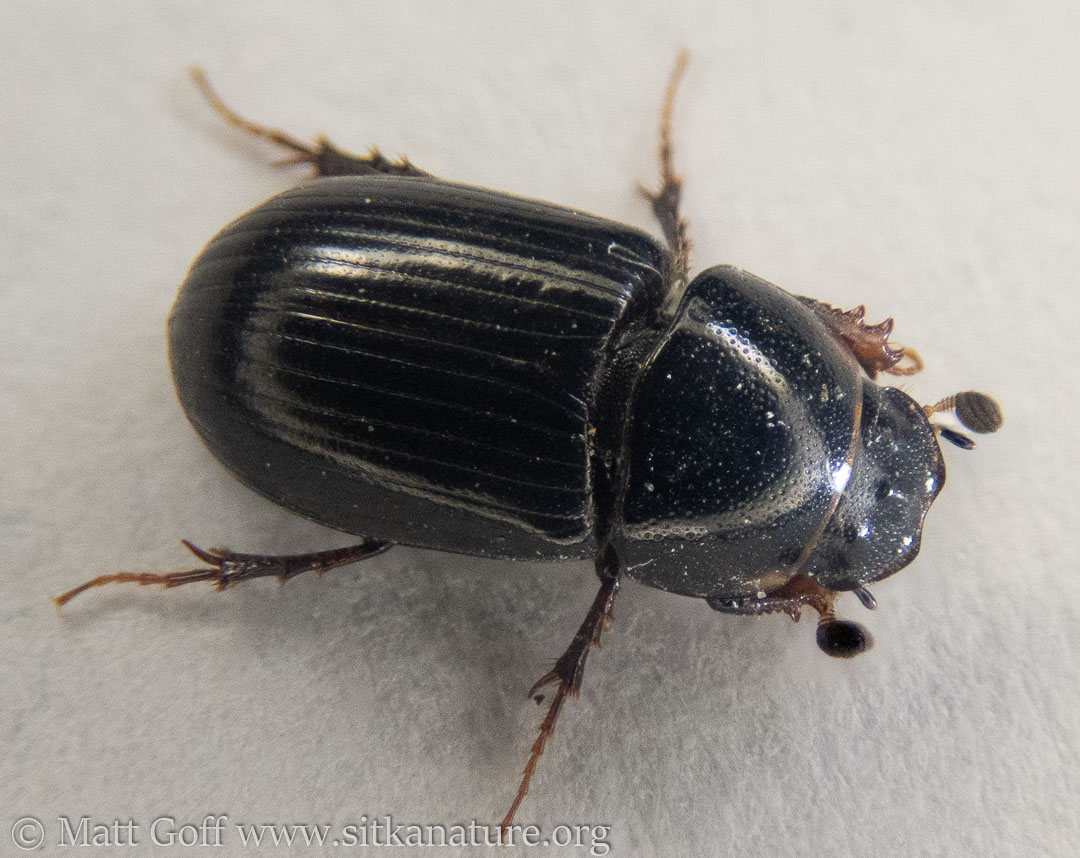 Low clouds with occasional small breaks that allowed some sun through.

The weather synopsis suggested that much of Southeast Alaska was sunny today, but there was a marine layer offshore. It apparently pushed in far enough to be the dominant factor for our weather in town.

We did see some precipitation, though much less than over much of the month so far.


The past couple of days I’ve been feeling inspired to spend time with liverworts. This year I am hoping to double the number of liverwort observations and the number total liverwort species I’ve observed. The former is certainly more likely than the latter, but both should be feasible.

Liverworts are common, but not always easy to identify.

I think a Scapania, possibly S. undulata. Growing on rock in a small stream.


Today I stopped along Kramer Avenue near a small streamlet. I checked the rocks where it was running. I mostly saw what I think was Scapania undulata, which I photographed and made a collection of.

There was also something I think may have been a Hypnum, but I’m not sure. It looked like sporophytes were developing, so I decided to hold off on that one.

A focus stack sometimes results in a bit of a glow, especially if elements desired to be in focus are relatively far apart, as on this moss.


I picked up a moss in Polytrichaceae that I didn’t immediately recognize. I’ve photographed a handful of the 15 or so species in the family that could be expected to occur around Sitka. This may be one of them, but if so, one of the ones I’ve only found a couple of times previously.


Leaving the stream course, a piece of rotting wood yielded a couple of liverworts. One I recognized as likely a Riccardia. Unfortunately didn’t realize until looking into things later that I’ve probably assuming too much about the identification of these (lumping them mostly into one name, probably erroneously). I need to do a bit of collecting to get more comfortable with differentiating the three (possibly four) species that might be here.

Cephalozia strands (not 100% sure on ID)


I did pick up some of the liverworts. A mass of tiny strands that are probably Cephalozia or Cephaloziella. Both are challenging to get to species.

Several as unidentified mosses in Dicranaceae growing among liverworts


Before leaving, I checked the top of a cut bank. The exposure was volcanic ash. The area is wet, so in all but the driest weather, it stays wet. I found a mix of liverworts and mosses.
Rather than spend the time trying to take pictures of each in the field, I decided to pick a few small clumps of thing looked mostly different. The downside was the time it took at home to photograph and sort them. It was probably a little more comfortable (and certainly warmer), but my setup at home is definitely not optimized.

I did stop briefly at some of the usual spots to see what birds might be about, but I didn’t put much effort into it. It feels like the new year, new species energy for birds has worn off a bit. It is the time of year when some of the wintering birds move around, so I’ll try to keep an eye out for any new ones that might show up along the road system. However, I think more generally, as long as the snow stays away I may focus a bit more on liverworts, mosses, and maybe lichens until we’re more fully into spring mode.