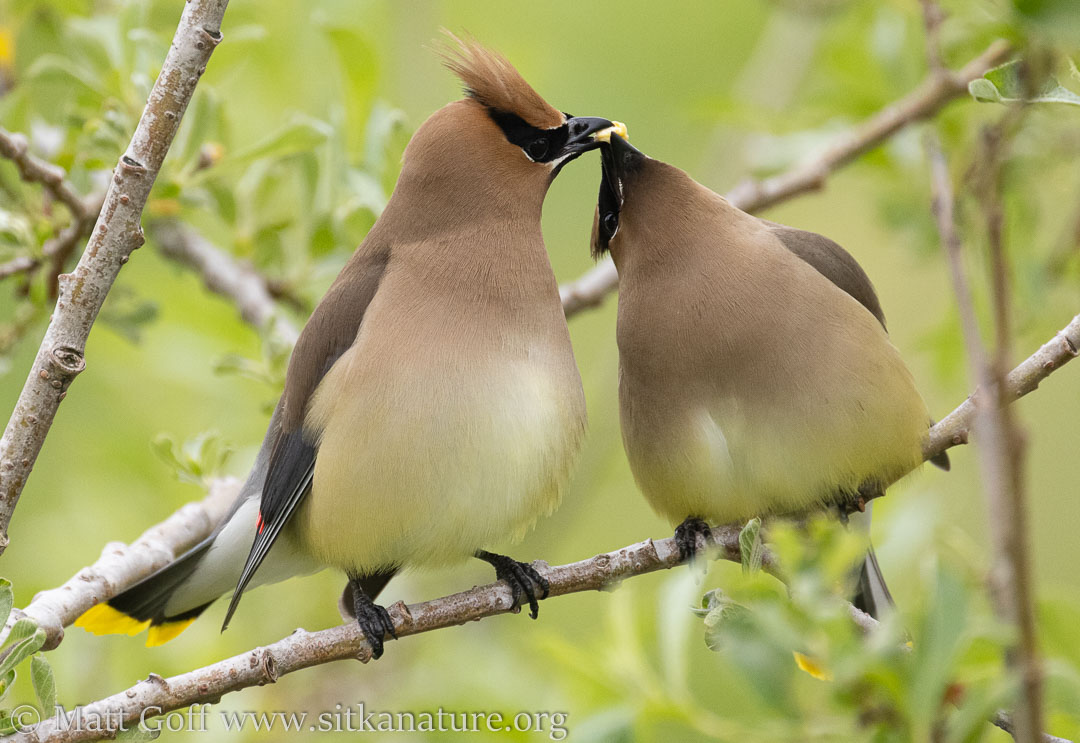 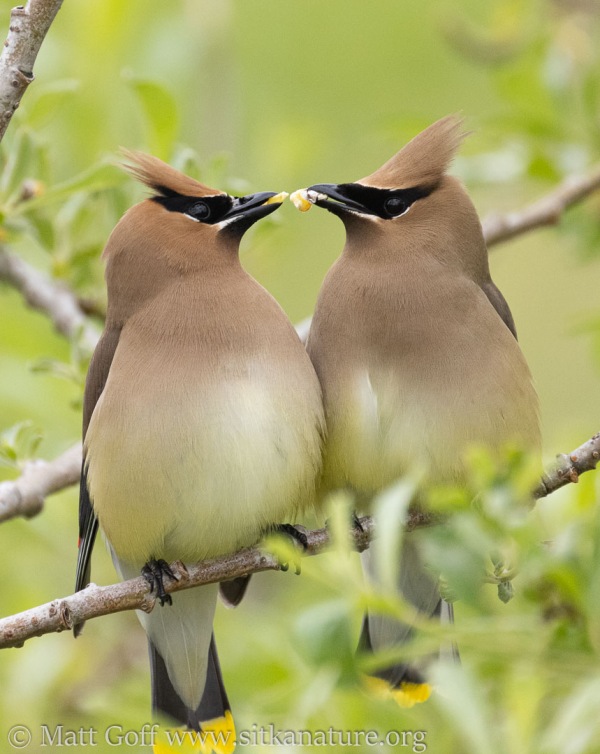 Overcast this morning, with rain starting this afternoon.

Given the forecast for rain later in the day, I decided to get out this morning.

Folks have reported Cedar Waxwings at Starrigavan lately, so initially I was thinking I would go there. I did drive out there, but then decided to spend my time at the golf course instead (10 waxwings had been reported there this morning). 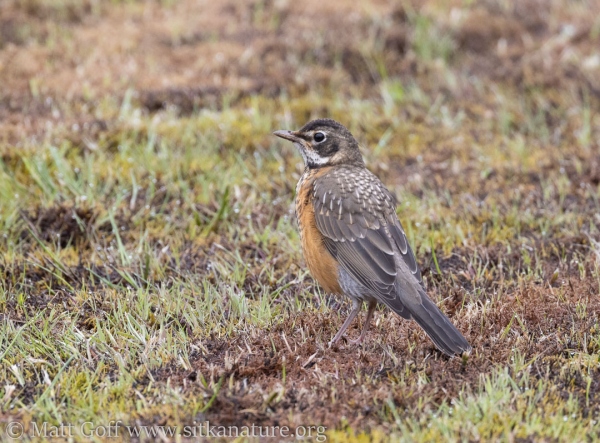 As I began my walk, I could hear begging starlings in the distance (even over the noise of a riding lawnmower cutting the grass in the driving range). Over the course of the time I was there, I also saw juvenile robin and Varied Thrush. There may have been a juvenile Townsend’s Warbler getting fed as well, but I didn’t get a look at it.

I noticed Cedar Waxwings (#137) first in the trees near the ditch that goes from the pond towards the driving range. Then I saw several in a snag up the hill from the pond.

I went up the hill to get a better look and noticed there were many more than I thought. I counted 15, then more joined and it was over 20. Ultimately the highest single count I had was 27, but I wouldn’t be surprised if there were more. This is easily the most I’ve ever seen of these here. 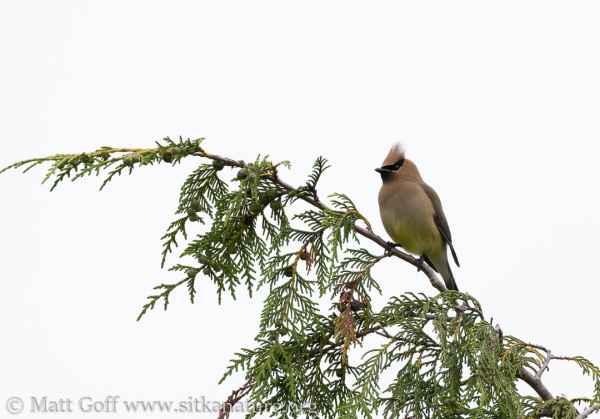 The waxwings would spend time just perched in a tree, often near the top of the snag. Sometimes one would sally out and to catch a fly. Regularly some would fly down, mostly to the salmonberry thickets, with others returning to the perch. It wasn’t quite constant movement, however there was a lot of coming and going, which is what made it difficult to get a good count.

I spent most of my time near the tee for the 6th hole, and some time further down the fairway. This turned out to be a good place to watch from, as the steep hillslope below meant I was more at eye level with the canopy. In addition to the waxwings, there were several other birds that offered pretty good looks while I was there. 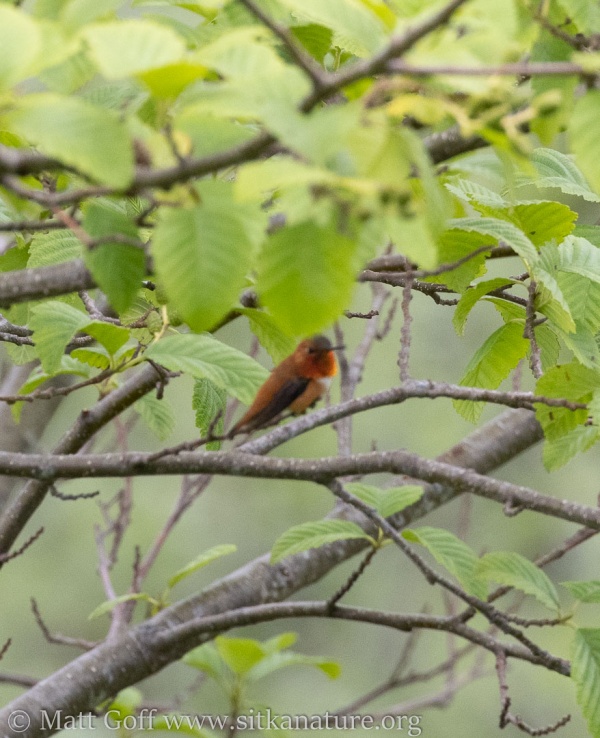 I did see one male Rufous Hummingbird. After doing some of the ‘J’ flight displays, it perched briefly in a tree where I could see. I tried to get photos, but it was far enough away that the even with the smallest focusing point on the bird, my camera had trouble deciding what I was trying to focus on. Though still identifiable as a male Rufous Hummingbird, the photos are more for the ‘missed shot’ collection. 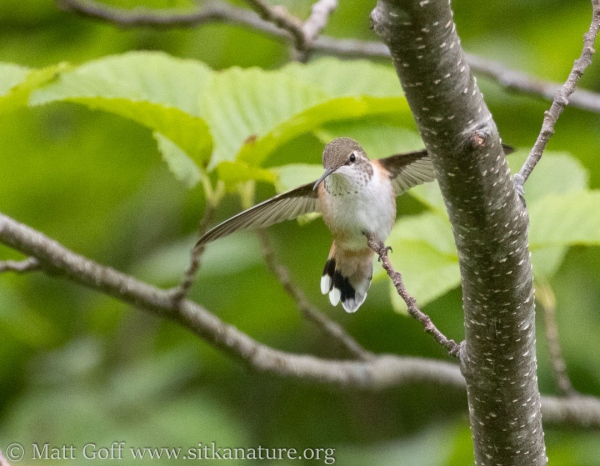 A female came out of the bushes, and the male promptly gave chase. They ended up crossing the 6th fairway, and away from where I could see or follow. I never saw the male again. I did get better looks at a female a few times, but I can’t say for sure whether it was the same one each time (though that is my suspicion). 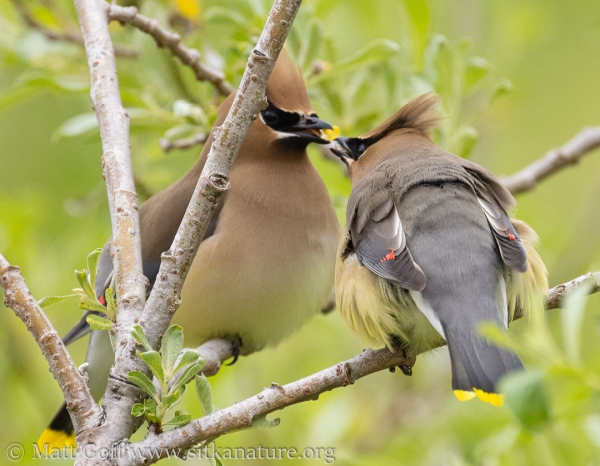 As I came around the pond on my back to the car, I noticed a waxwing in one of the willows. While I was watching, a second arrived and they started passing something back and forth. Looking things up this evening, I am pretty sure I witnessed a behavior called ‘courtship hopping’. At the time I was trying to keep them in the frame (and in focus), somewhat lamenting what felt like a suboptimal choice of lens and the camera settings in the moment. I didn’t specifically notice the pattern of hopping described, but I think that’s what they were doing.

In the two hours I spent observing, there ended up being a nicer mix of birds than I might have expected.

***Photo techniques reflections follow***
Sometimes there’s just not time to change things in the moment. Such was the case with the waxwing courtship hopping. I could have made a couple of changes in the moment, if things had been more automatic for me, but certainly didn’t have time to change lenses. As part of the journey to getting better, I do find it helpful to reflect on what I might have liked to do differently.

I had settings which were fine for the more distant and largely stationary birds I had been taking pictures of. When I started back, I had left my longest lens on, it does have advantages for distant birds, but I’ve decided it’s not the lens I usually want to have on while walking around (because it’s slower to focus, hard to find fast moving birds, and isn’t able to focus on things closer than about 20ft). Since it is fixed f11 and it wasn’t especially bright, I had the shutter speed at 1/640 (which works since the image stabilization on this camera is quite good). I also had it set to mechanical shutter (mostly do avoid piling up ridiculous numbers of nearly identical photos of stationary birds).

In this case, while observing the waxwings I was right at the edge of the close focusing distance for the long lens. The birds were large enough to almost fill the frame top to bottom, so there was not a lot of room to spare as they moved around. As a result, in some frames they are cut off or awkwardly positioned in a way that I will not be able to fully fix via cropping. Their movements were fast enough that several of the shots show motion blur at the shutter speed I was using.

With the shorter telephoto lens the birds would have been plenty large enough in the frame. I also would have had more space to more easily keep them in frame as they moved (and later crop for composition, if needed). I likely would have been shooting at f7.1, and could have easily used a faster shutter speed, reducing motion blur.

With electronic shutter I would have had many more shots (probably a couple of hundred or more), but I would have had minimal blackout during shots (making it easier to keep the birds in frame). It would have been nice to have been able to see the movements better (and maybe make an animated gif out of a series of shots). With 20 frames per second, I also would have had more moments to choose from in their interactions (which is admittedly not always such a good thing).

I still ended up with several photos I liked, so I don’t want to seem like I’m entirely unhappy with the results. Just working to increase my chances in the future for situations where I may have less room for error. 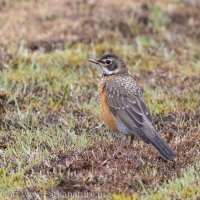 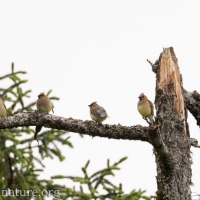 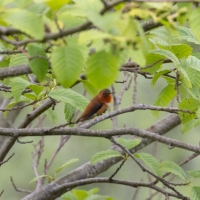 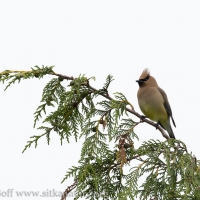 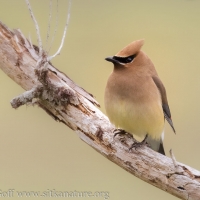 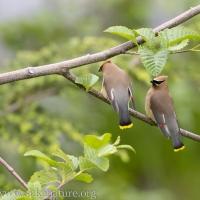 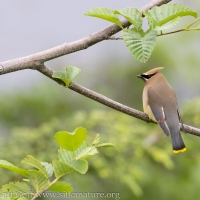 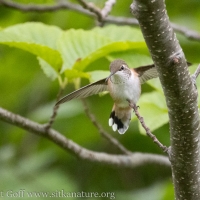 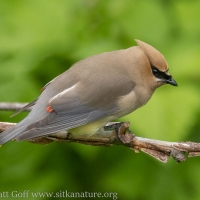 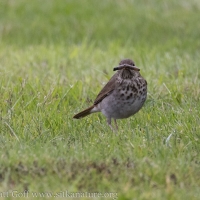 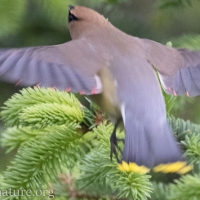 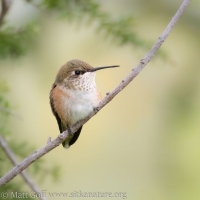 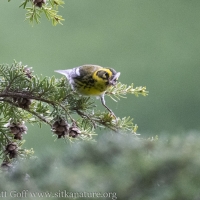 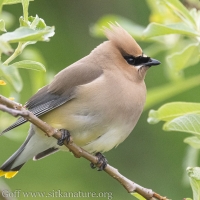 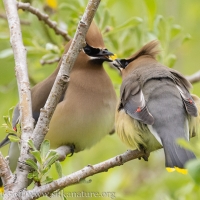 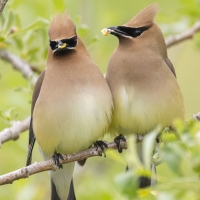 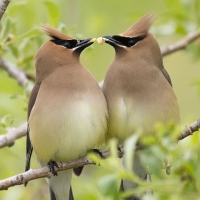 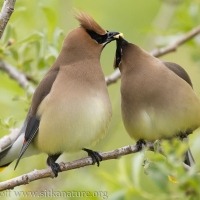 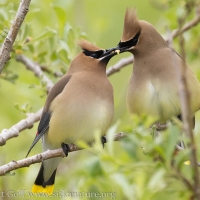 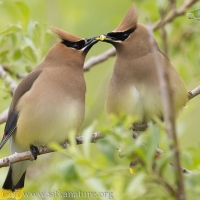 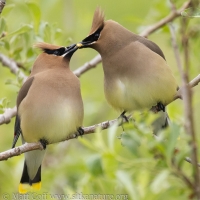