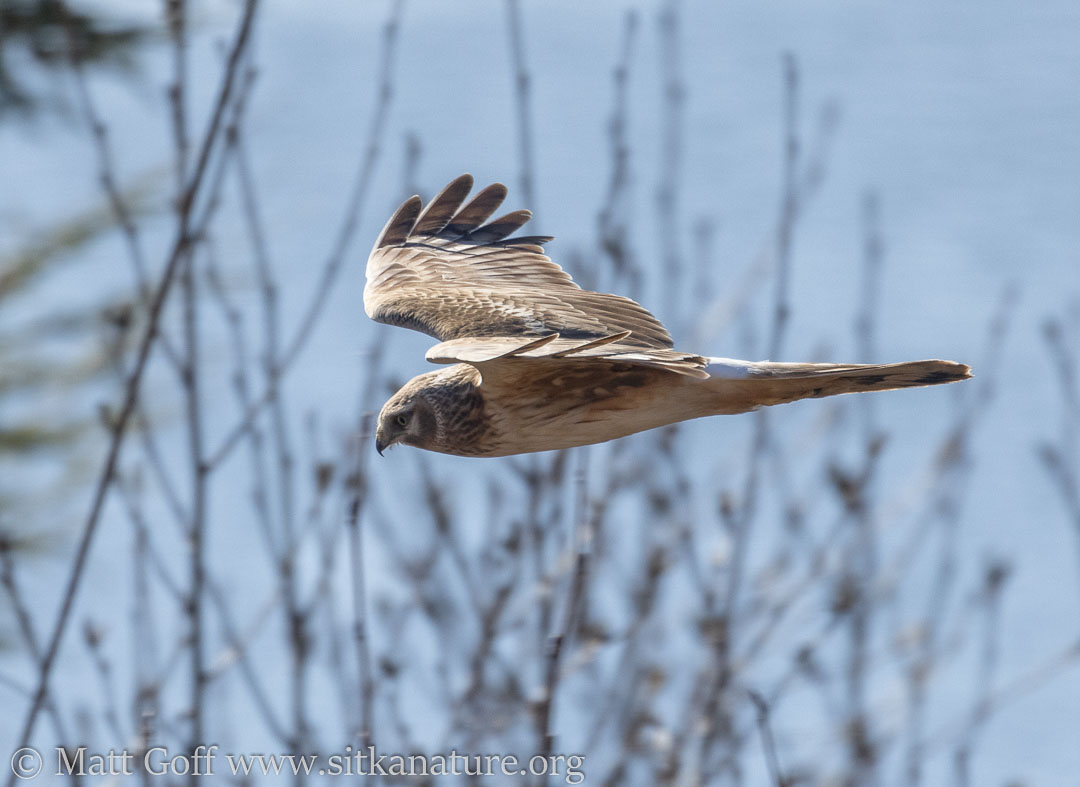 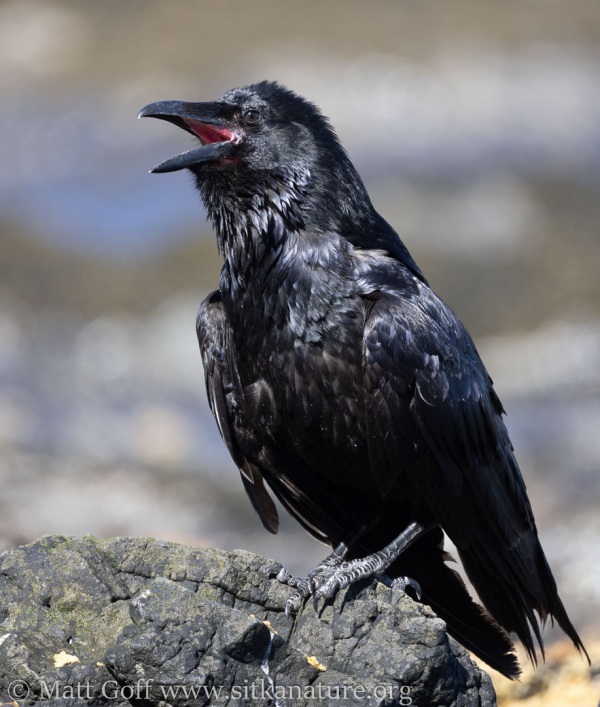 Sunny and cool this morning, but no frost. Warmed up into the upper 60s this afternoon, setting a new high temperature record for the date.

I took a morning walk to the lake. I saw teals, but didn’t see the Eurasian Teal among them. 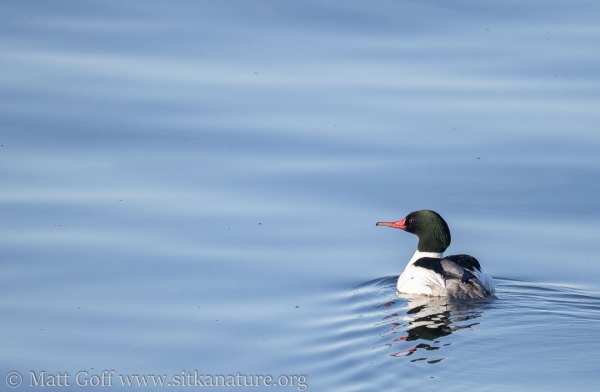 From there towards the park. Had intended to walk the flats, but got a text from Connor about a Red-winged Blackbird over by Eagle Way Beach, so walked through the park to get there.

Ran into DK as I was exiting the park and walked with him back to check for blackbird. No luck.

Meanwhile had a message from KJ about Cackling Goose and Harrier at the airport, so walked back home to get vehicle and head over there.

I started down old airport road to check lagoon for the Cackling Goose (no luck), then saw two Snow Geese (#92) fly into airport. I noticed a message that the Merlin was in a tree over by Lazaria Drive, so started back that way.

I was scanning the tree tops and getting ready to cross the road, when I noticed a harrier (#93) flying very low off to my left as it crossed the road. It dropped down on other side of the road then up and over to edge of brush pile. Two pigeons flushed.

DK was over there at the time and saw it fly up Lazaria Drive.

I went over to look for Merlin. KJ was just point out where it was, but it took off before I could see. While that was happening, the harrier flew over right behind her. 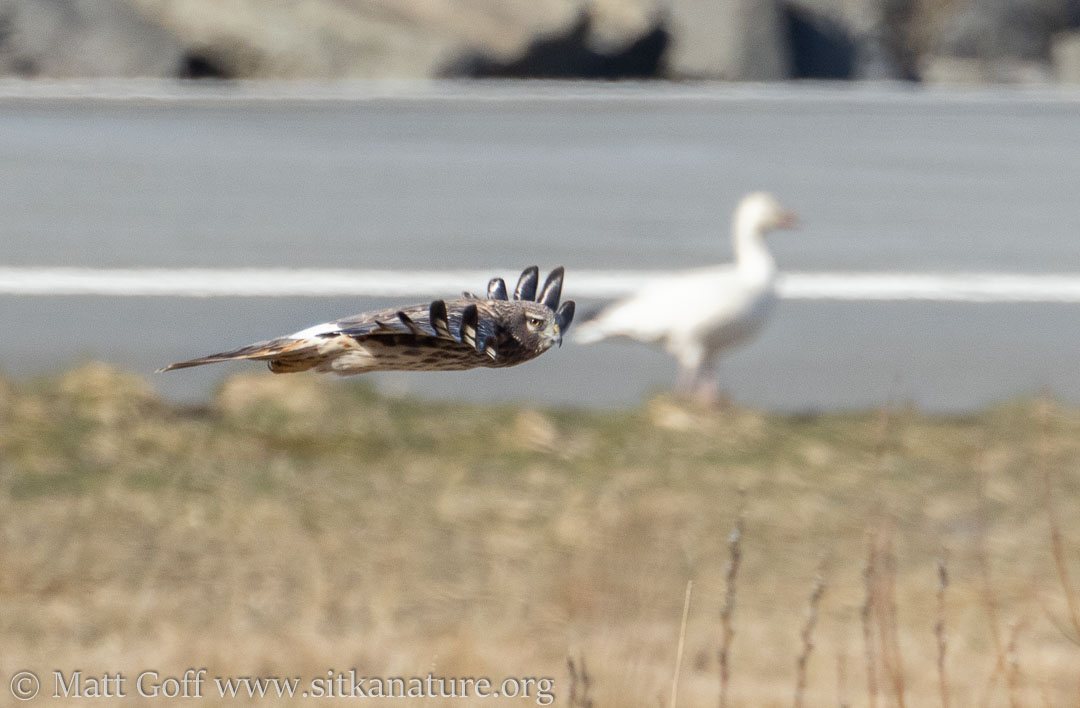 DK, KJ, and I walked over to old airport road to get a better look at the geese. We had another encounter with harrier and probably the merlin. I saw a harrier fly, DK saw harrier and probably the Merlin not far above, KJ was looking for/at Snow Geese and saw neither. A few minutes later the harrier flew by right behind me, and I only noticed it after it had continued on and I looked back in response to DK and KJ saying something. It makes me wonder how many things I just miss, despite them being close.

A second harrier (female, I think) showed up and both were around for a bit.

I had plans to go out on boat later in the morning. Found out KL wanted to go to Pt. Brown, so got my stuff ready and was headed out on boat by around 11am.

Quiet in the channel – just a few scattered gulls. Long-tailed Ducks seem to have departed. Did see one Common Loon nearly transitioned to breeding plumage.

Very calm heading out, not nearly as many birds along the way has had seen previously.

There were boats at most beaches we passed. 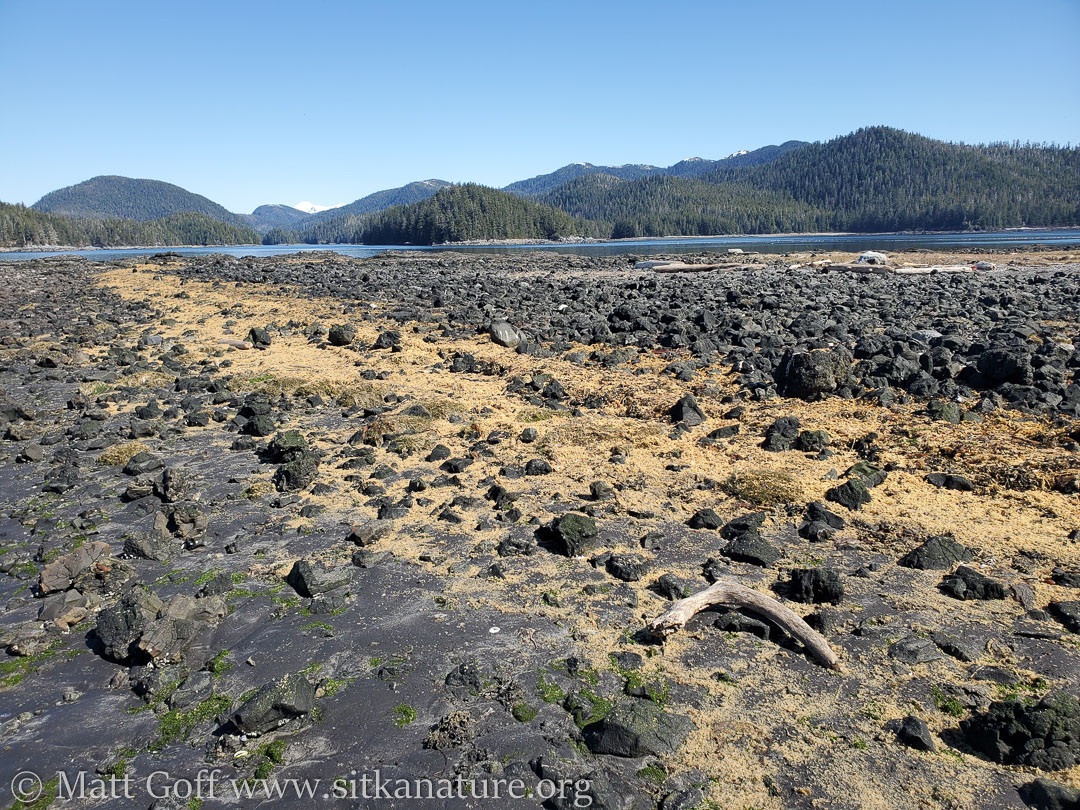 At Pt. Brown – while KL did her gathering of stuff for garden, I sat and listened.

There were hundreds of gulls on the basalt rock shoreline when we arrived. I went to pick up a tub-like thing I that had drifted to shore, and as I was getting ready to go look at the gulls on the rocky part of the shore, a passing boat fired off three shots (at least that’s what it sounded like). The gulls all flushed, and moments later the boat sped up to cruising speed. The gulls never game back to the shore while we were there.

At 67-68F, it was warmer than I expected (considering the forecast for low 60s) where I sat. As it turned out, it got that warm in town as well.

A raven that was eating on washed up herring eggs just stood there with its mouth open for a while. I’m guessing that was a strategy for keeping cool. 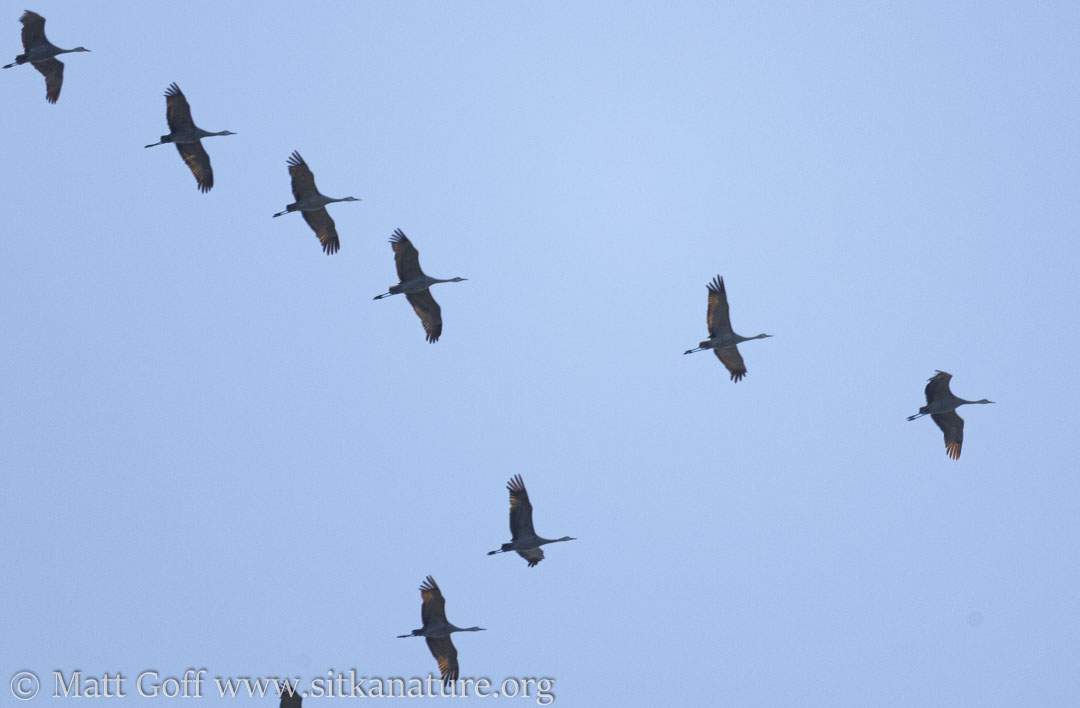 While I was listening, I thought I heard a Sandhill Crane calling, but when I stood up to listen and look, there was nothing more. I began to wonder if somehow I had just mistaken a distant raven, or something. A few minutes later, I heard it again – and this time it continued. Before long a flock of 51 cranes (#96) appeared over the trees flying north.

There were many ravens active in the area – no doubt feasting on herring eggs and getting up to raven mischief between meals. At one point I saw a raven dangling from a branch. I wasn’t too close, but I wondered if it was tangled up in a line that got wrapped around the branch. As I started to think about walking over, it moved (maybe flipped?) then dropped down to another branch. I’m not sure if it was hanging upside down from its feet at first, but just before it dropped, it looked like it was hanging from its bill.

After getting the boat loaded up, we went into Port Krestof.

Tide was coming in, so not so easy to get off for a walk around the beach. Lots of ducks (dabbling and diving) near shore, but most flushed as we were cruising along. Sun not at a great angle, I hadn’t got my camera out, so wasn’t able to try getting photos as they flew by.

After eating lunch, decided to head back with a side trip along the Kruzof Shoreline out towards Shoals Point.

Some gray whales near Mountain Point (lots of gulls along the shorelines).

Chop picked up from SE wind as we got to Fred’s Creek. Was looking like it would be bouncy and wet to continue on to Shoals Point, so we turned back to town. (It was interesting how the wind chop was absent inside a transition zone that was still out in the sound. I’m not sure why it was.) 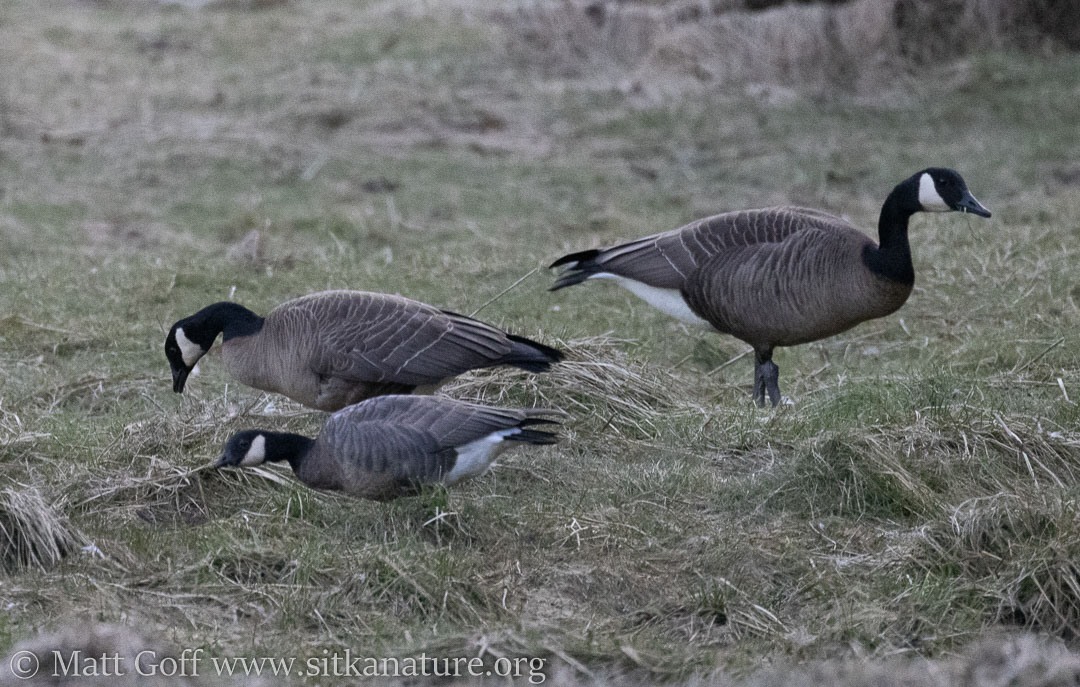 This evening went to the park to look for Cackling Goose (which had apparently moved there). Found it (#97) with at least three Canada Geese, and one goose intermediate in size between the Cackling and Canada Geese. I’m not sure which it is.

While there heard, then saw, an American Pipit (#98)

I stopped by Swan Lake. Briefly saw swallows, but they didn’t stay. While driving up Lake Street with car window open I heard a Red-winged Blackbird (#99). It was up in an alder tree along the road. Perhaps the same one Connor had seen this morning.

My time with blackbird meant I missed seen sun drop down, but there was still interesting yellow glow above where it was now out of sight.

Put a couple of plants outside (have tomatoes on plant that I overwintered).

Moth season is going now. I’ve been getting some at my house (I now have UV going in addition to my porch light), and also finding them at the park. 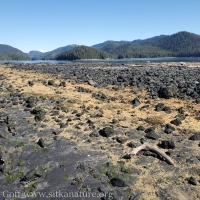 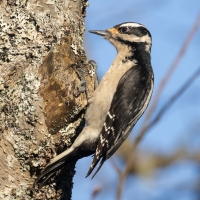 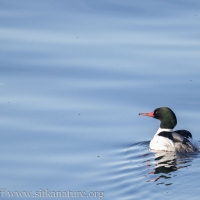 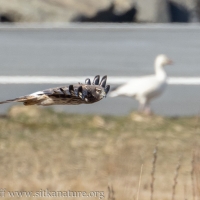 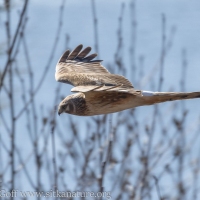 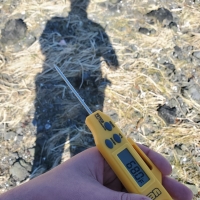 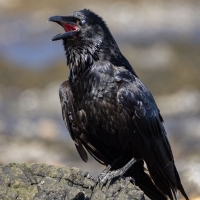 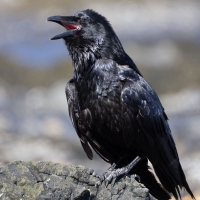 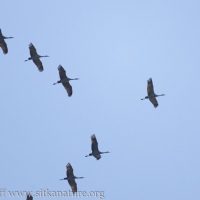 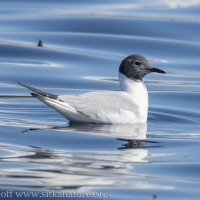 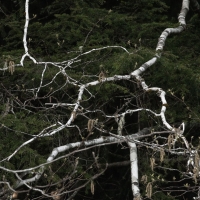 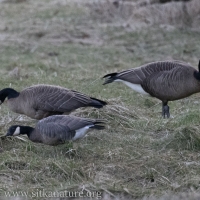 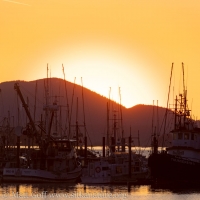 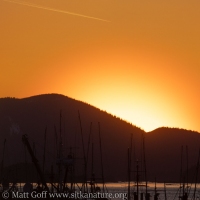