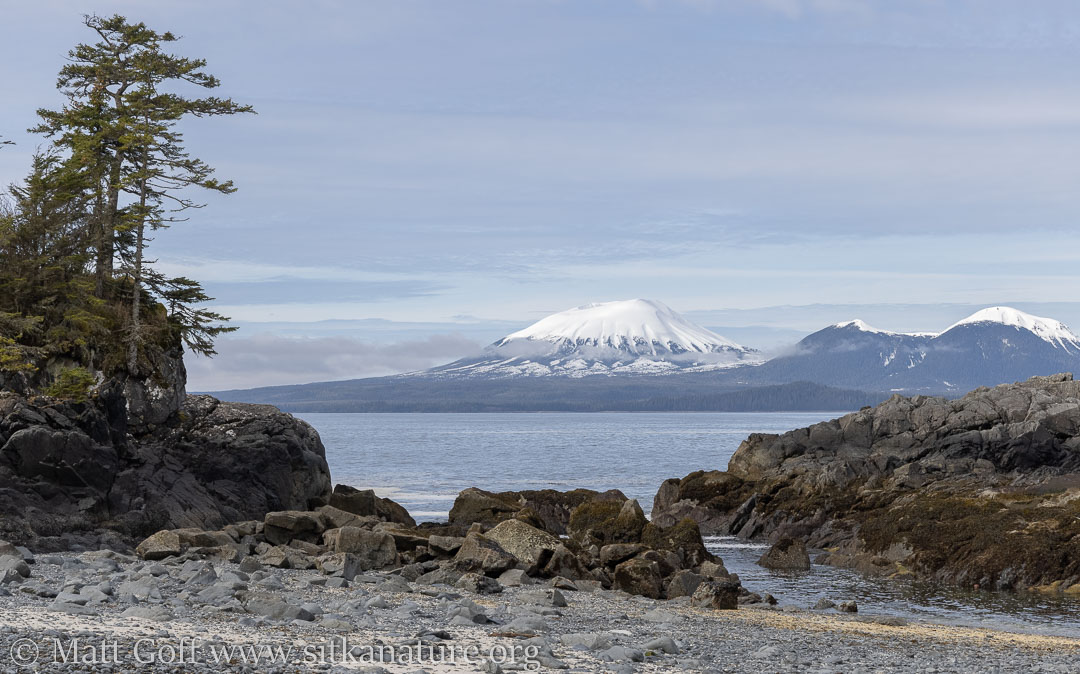 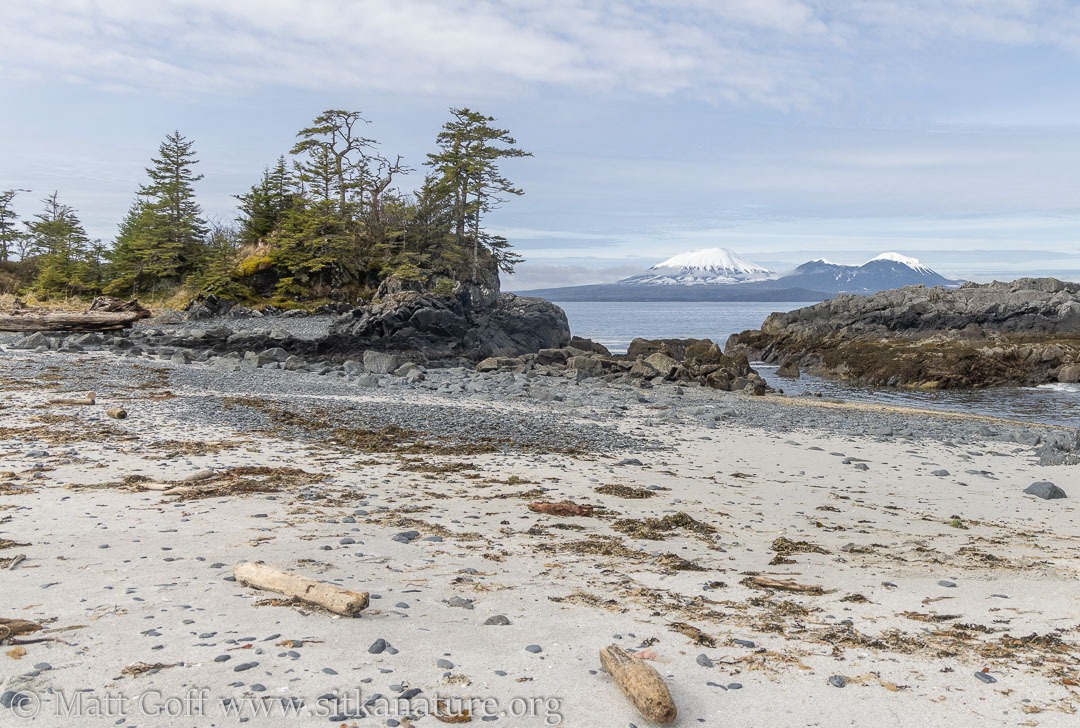 Overcast this morning, with clouds breaking up and staying between partly cloudy and mostly cloudy for much of the day.

It looks like the high temperature for the day was 48F, which means this year has tied the latest first 50F degree day of the year (at the airport). Given the forecast for mid-50s and sun tomorrow, it looks likely that we will not see a new record.

Beyond tomorrow, the forecast is for low 60s on the weekend then sunny and in the 50s through most of next week. Quite a change.

I wanted to get out to see a spring ephemeral seaweed that has a limited habitat around here, and between weather and schedules today turned out to be the best chance to get out with KL. 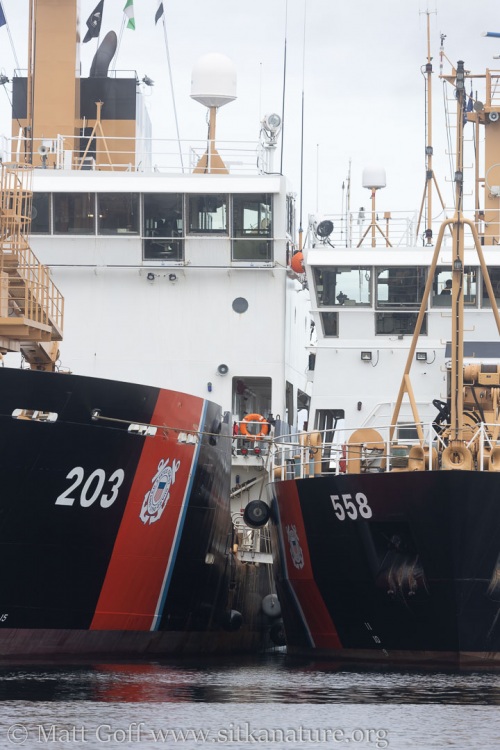 Around midmorning we headed out to visit the Chaicheis. 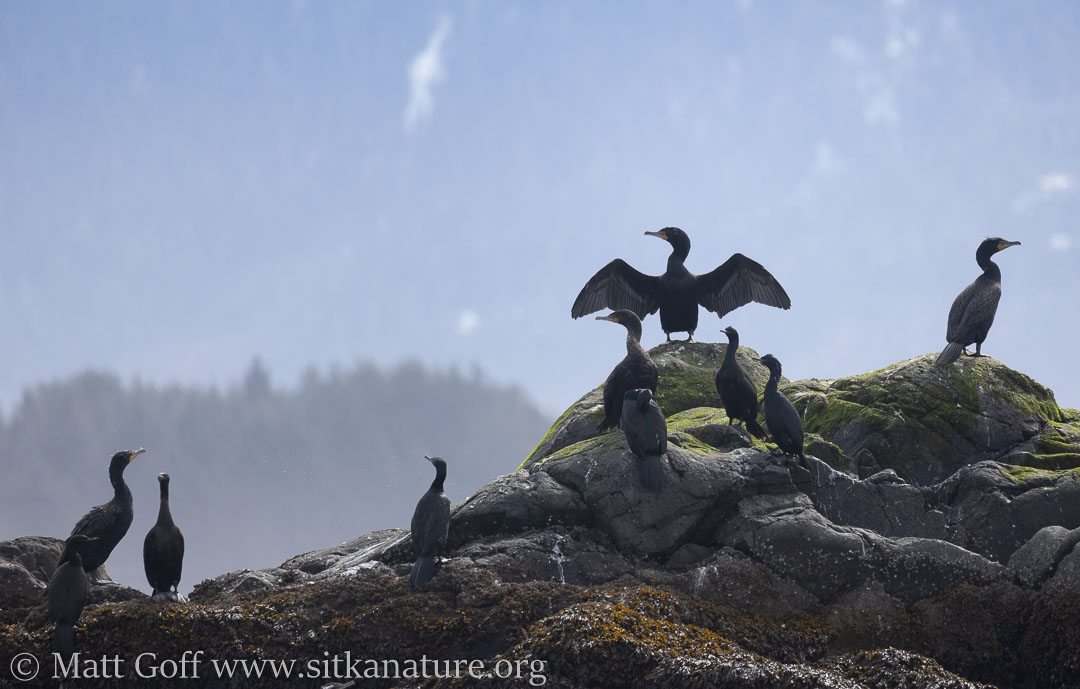 Long-tailed Ducks were still at the north end of the channel. I took pictures of cormorants on rocks along the way, but don’t think a Brandt’s Cormorant was in the mix (though I’ve not had a chance to review all the photos carefully yet). Near the Chaicheis there was a good-sized flock of mostly scoters. I didn’t spot a Black Scoter in the mix, but there were plenty of Surf Scoters and White-winged Scoters.

I did find the seaweed, though it probably won’t be around much longer. 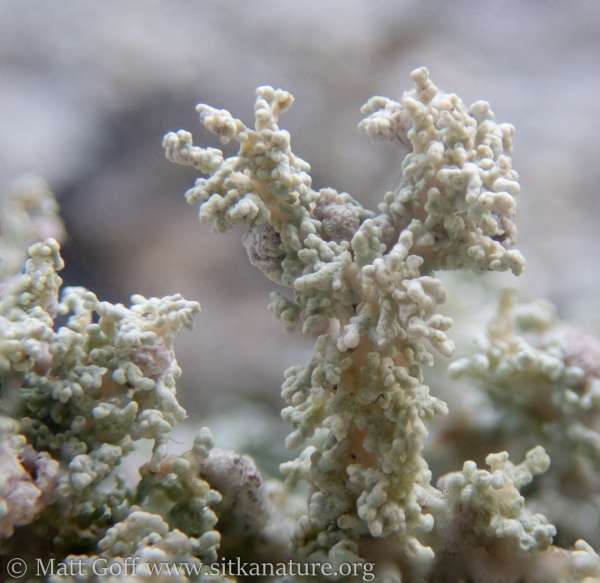 I also spent some time looking for lichens. There are a couple in particular I was hoping to find. They are rare (or at least poorly known) species that have been reported elsewhere along the Gulf of Alaska on exposed outer coast locations. I’m sure I didn’t find one of them, and think I found a different species in the same genus as the other (which actually hasn’t been described and given a species name yet).

The forecast for today had been overcast with a chance of rain, so it was a pleasant surprise to have the sun break out a bit while we were out.

As it turned out, we only ended up having a little over an hour to spend on the island. It was a little over a year ago when I was last here, so it was nice to renew acquaintances, even if it was only a short visit. 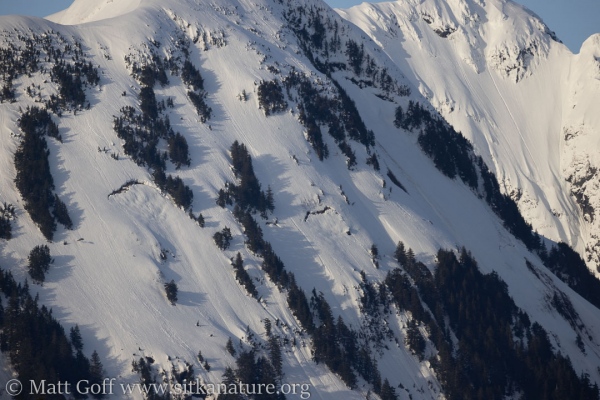 This afternoon I spent some time taking pictures of the mountain snow. Snow depth at the Harbor Mountain sensor has already dropped about 1ft from its peak earlier in the week. I expect that’s happening elsewhere as well. There was certainly evidence of lots of snow moving downhill. Many of the places looked like chunks of snow had dropped and rolled, but there were also glide cracks which showed the entire depth of snow had shifted downhill. I first noticed a couple on the Middle Sister yesterday, and they had expanded noticeably since I took the pictures then. 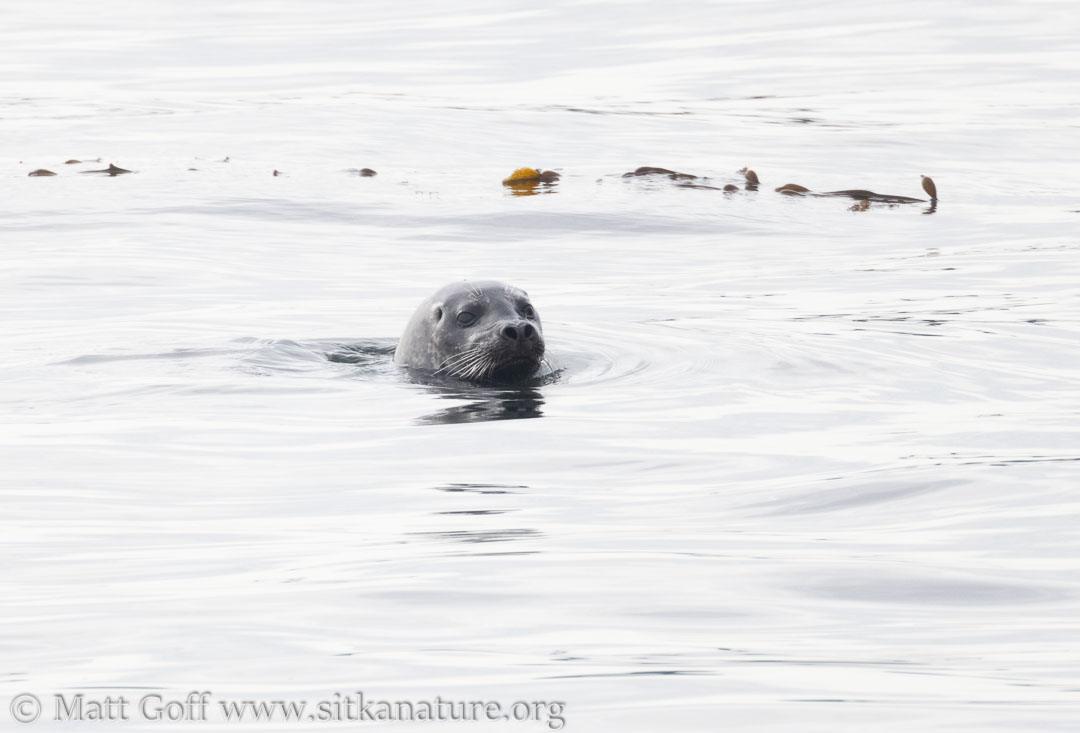 On a stop at Sea Mart, I wondered about two Harbor Seals and a sea lion that were right near shore. I don’t know if there were some herring in there, or bigger threats out in the bay.

Ruby-crowned Kinglets seemed to arrive all at once today. Walking to the harbor, I heard several calling and singing. There were more on the Chaicheis and I heard reports of them elsewhere in the area as well. Prior to today, I had only seen one so far this year. I think it overwintered. 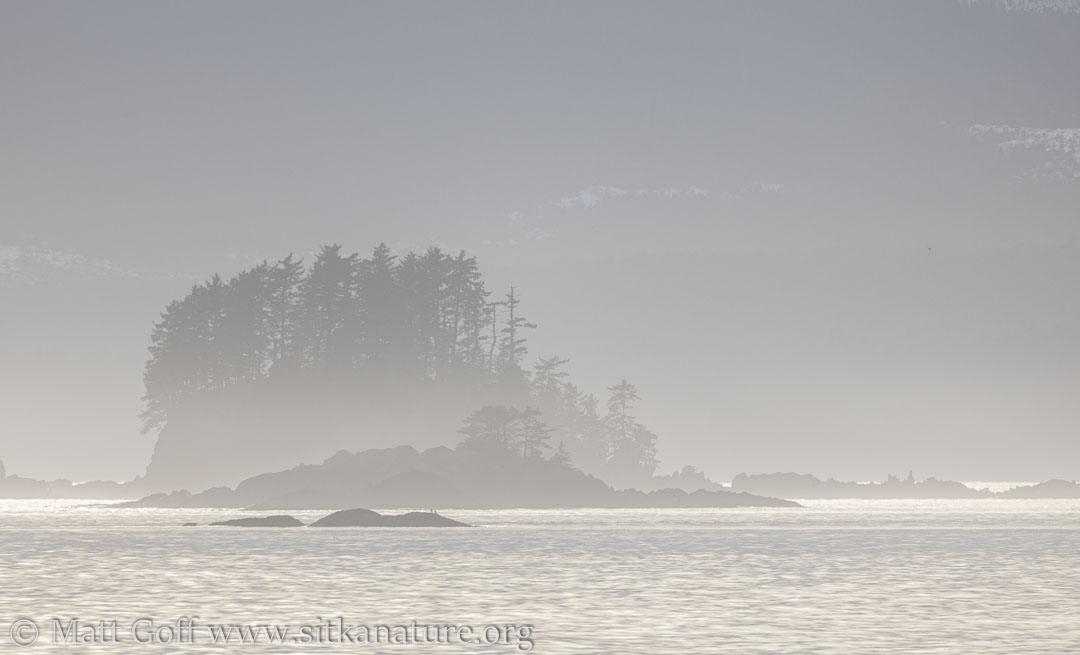 I’ve continued reviewing the hourly photos from the buoy. I saw a mystery dot today that I suspect is a bird, but it’s hard to be sure. I also noticed (for the first time) that the top of Mount Edgecumbe is just visible in the pictures (and perhaps some other mountain peaks as well). Once I realized that, I could see it in several of the image sets. Tracking it allowed me to see the buoy must rotate a bit on its chain/anchor, since the mountain didn’t always show up in the same frame.

The aurora forecast is suggestive that there might be opportunities for viewing tonight, but I don’t think I have it in me to stay out for it. Maybe tomorrow or the next night (Saturday looks like the expected peak for the next bit). We’ve entered the time of year when I tend to get behind on processing photos and writing (but especially publishing) photojournals. I’m going to try and keep up with the writing and publishing a bit better this year, but time will tell. 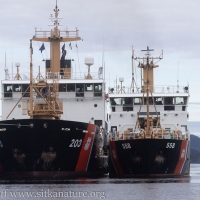 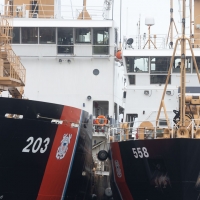 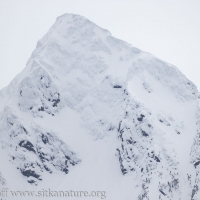 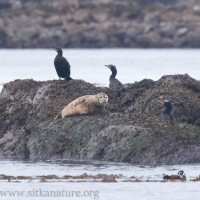 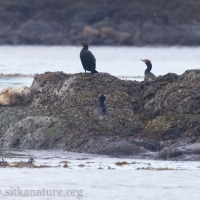 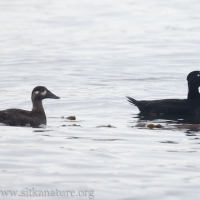 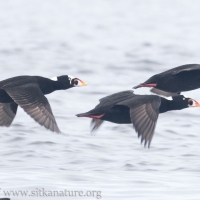 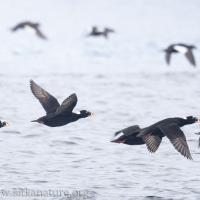 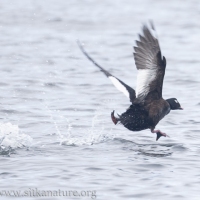 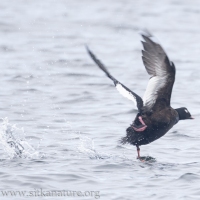 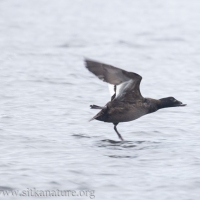 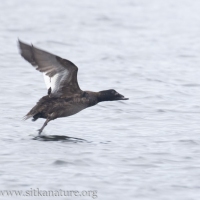 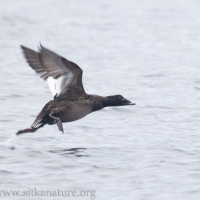 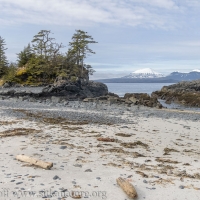 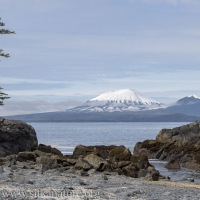 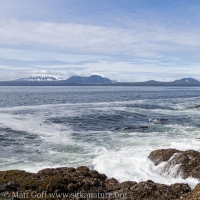 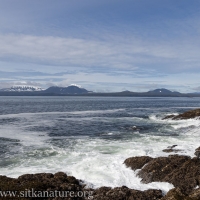 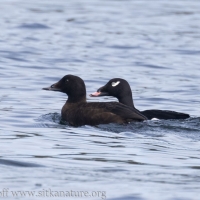 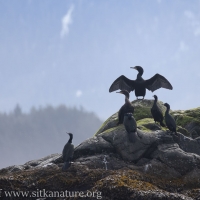 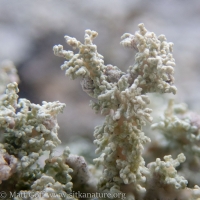