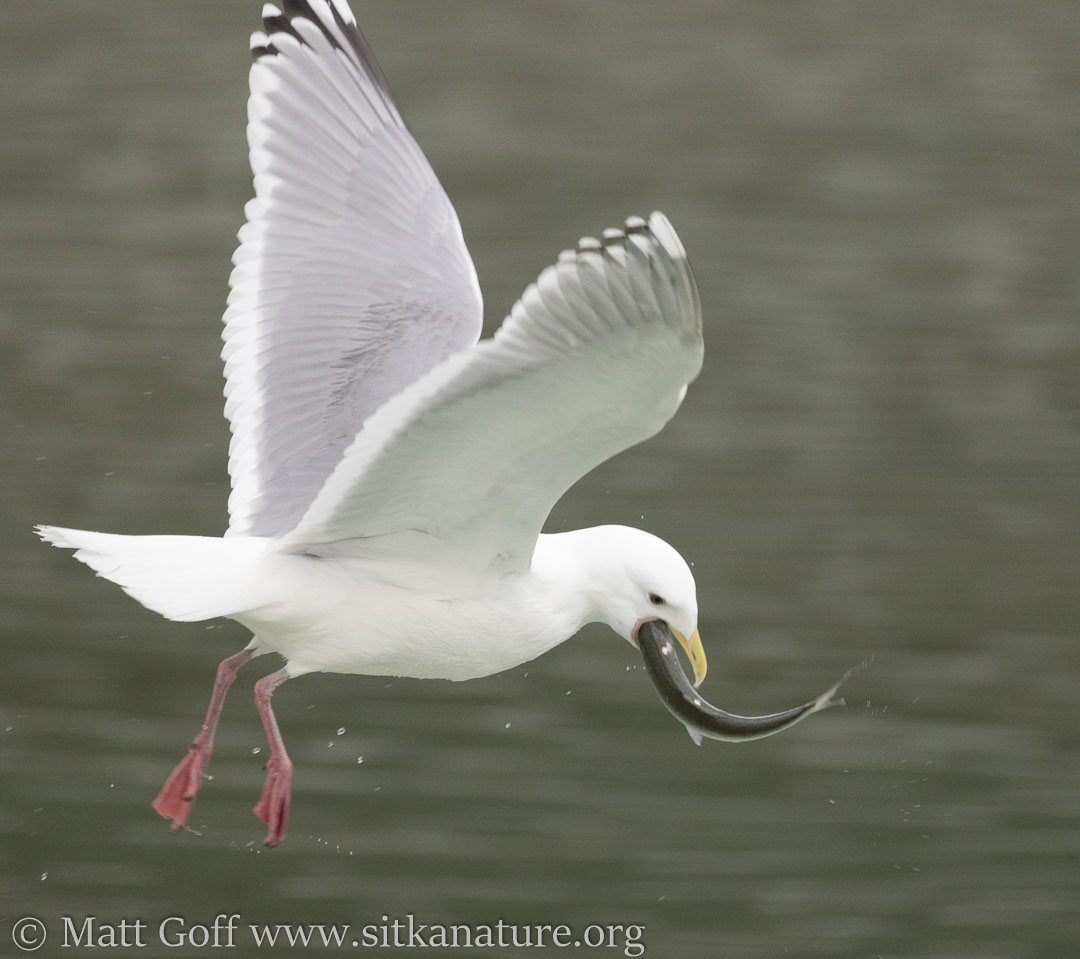 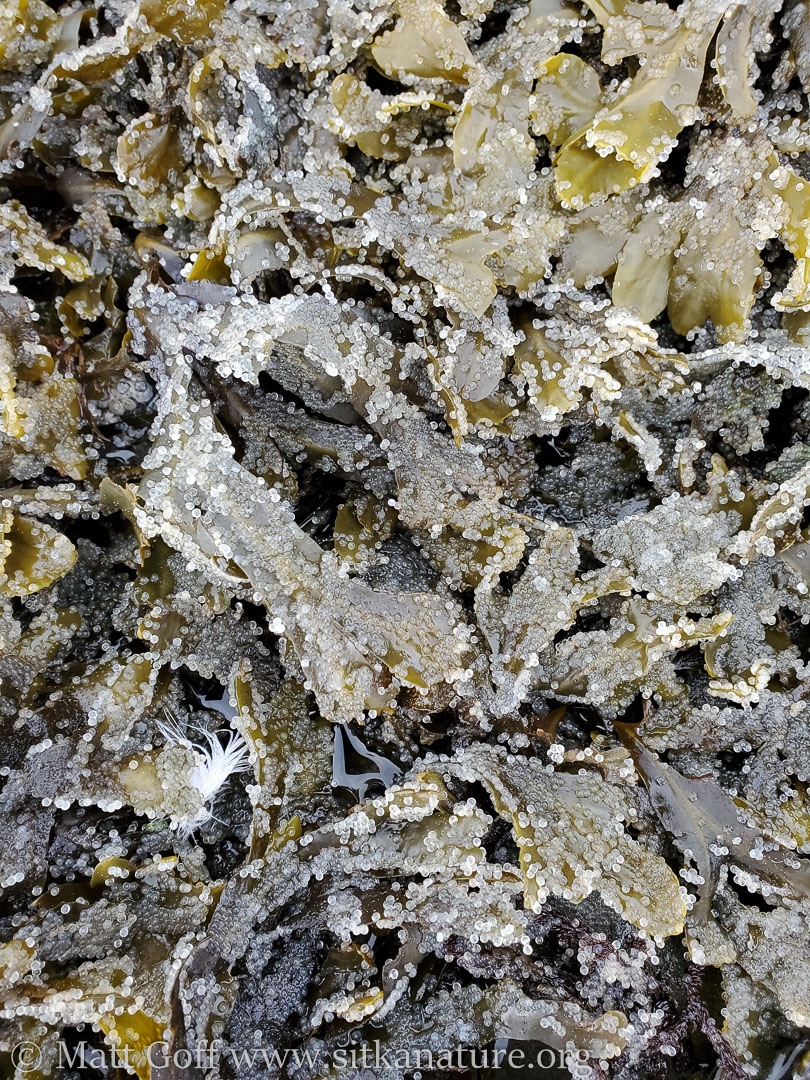 Calm with occasional snow showers (heavy at times, but quickly melting). Winter is hanging on.

I spoke with someone yesterday who has been recreating (including backcountry skiing) around Sitka for 40 years. He mentioned that in the past he considered March and into April as the snowiest time in the mountains.

I got a message this morning from KJ that the Great Horned Owl was back at Lazaria Drive. I had a call and wasn’t able to go look until early this afternoon. I was on my drive over when I received a text from LP. When I stopped to read it, I saw a second report of the owl, but it had flown off from its roost.

I went back home to eat lunch, and a while later Rowan went with me and we poked around in the woods between the current and old airport roads. No luck on the owl, but I did hear Golden-crowned Kinglets singing.

There was also a report of a possibly injured Fork-tailed Storm-petrel in the Channel. I made a couple of stops by there while out, but never spotted it. 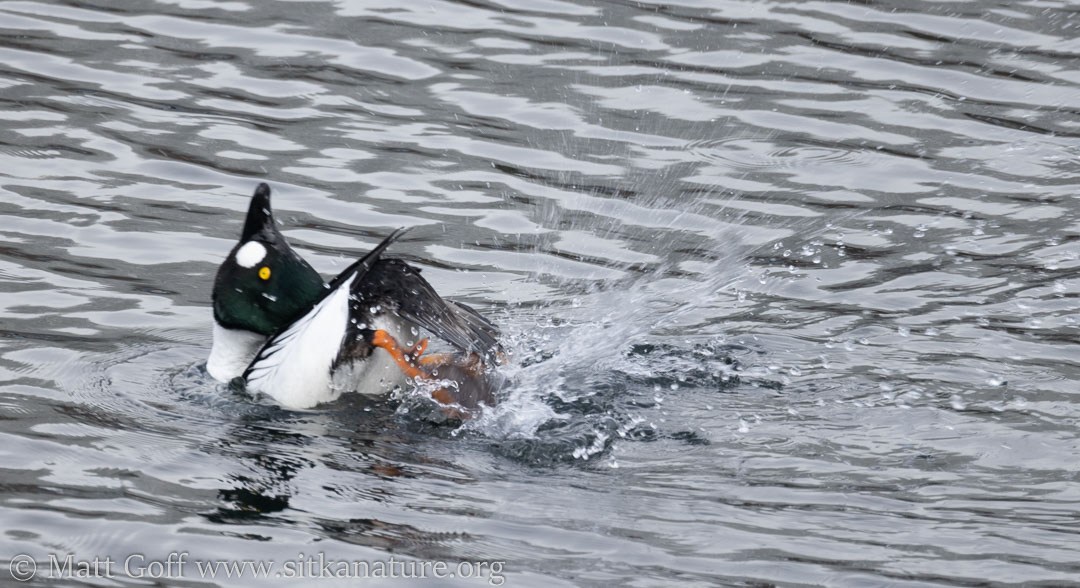 On one stop, I was able to just catch a courtship display move by a male Common Goldeneye (I didn’t see a female around, though). I didn’t have time to get set up for better pictures, but did grab a couple that give the idea of what it was doing.

On my back and forth to look for the owl, I noticed the gulls seemed especially active on the beach by the big tidepools. Normally when the tide is out, they’re mostly hanging out, but today they were much more active, gathered in locations I don’t usually see them gathered, and spaced differently than normal. 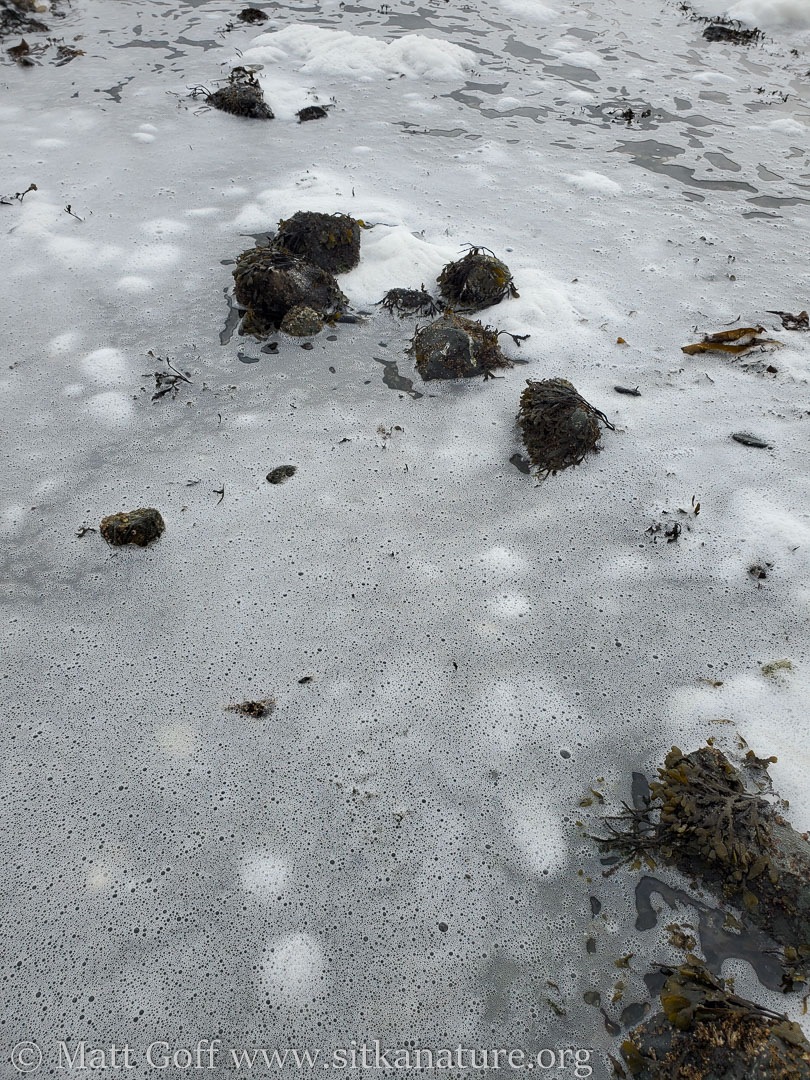 I suspected some herring were there, and decided to walk out and take a look. There were herring in the shallows, as well as in the bigger tidepool. Some spawning was happening, though egg deposition was light. (Pictures posted on the internet suggested there was heavier spawning elsewhere in the sound.) 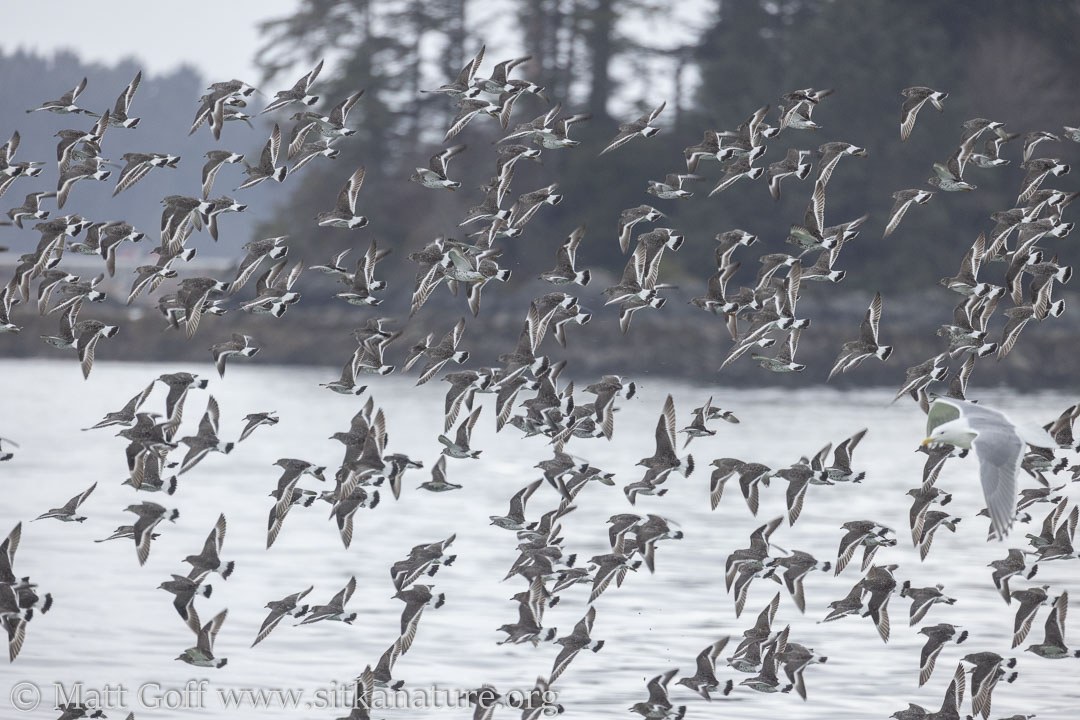 There were many hundreds of gulls. I was a little surprised to see at least several hundred Surfbirds working the lower part of the beach among the gulls. I didn’t notice herring eggs where they were poking about, so I ended up with the impression they were eating other things. 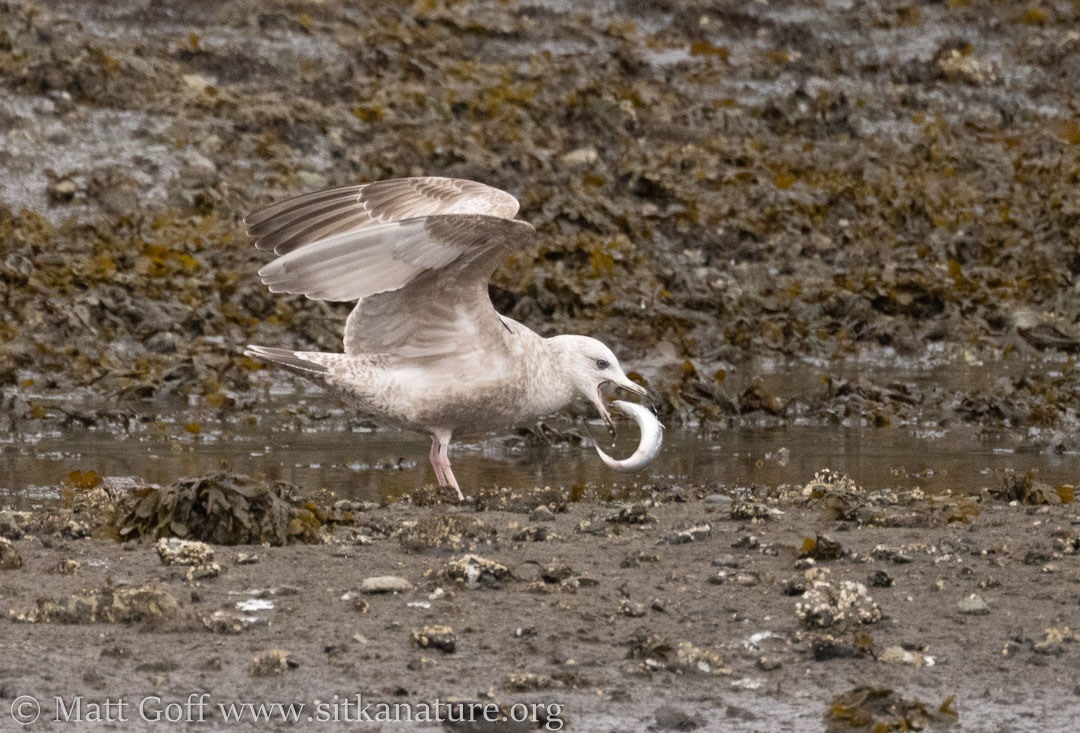 I’m not sure if it was just a coincidence of the birds I happened to observe, but it seemed like the juvenile gulls weren’t quite as adept at swallowing a whole herring on the wing as the adults were. 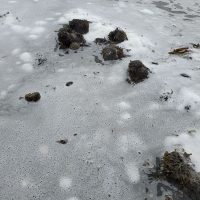 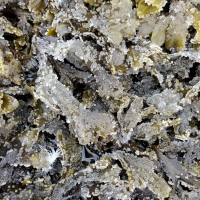 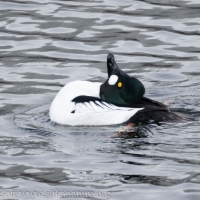 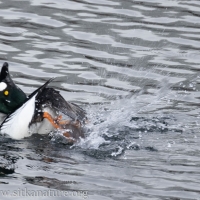 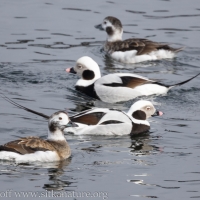 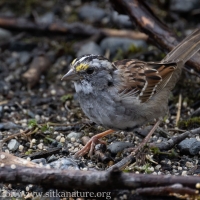 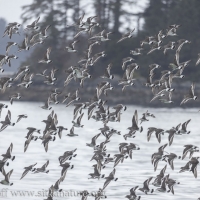 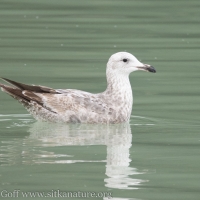 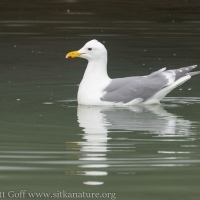 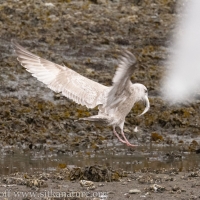 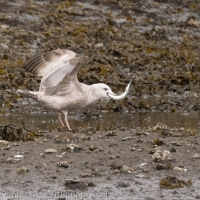 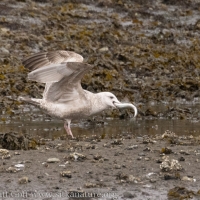 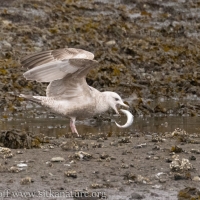 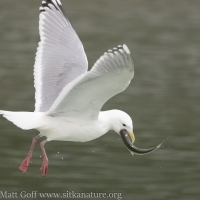 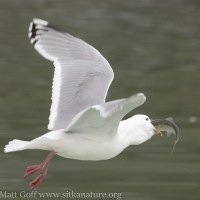 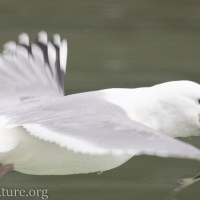 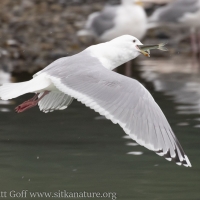 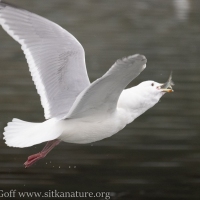 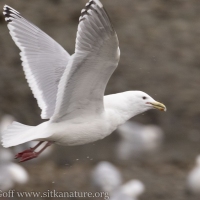