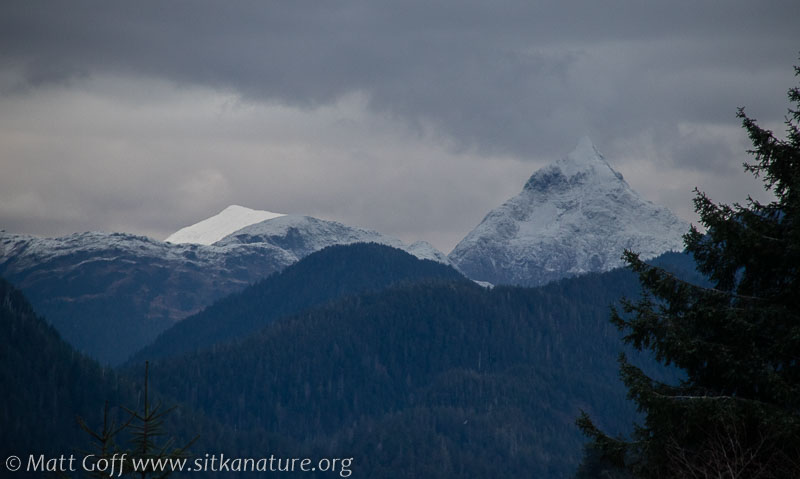 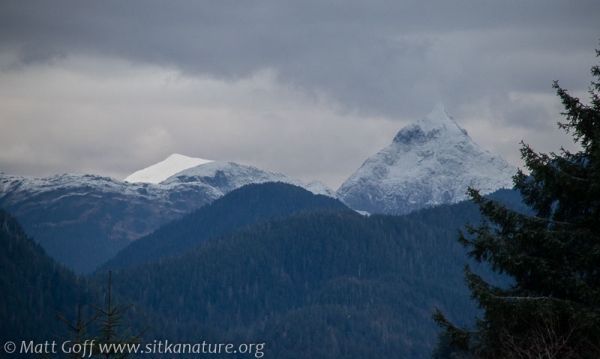 It’s been a busy week for, me, with little time outside.

Mostly the weather has cooperated (i.e., not made me feel too bad about staying inside to work), though the clouds did open up from time to time to let some direct sun through.

So far this year I don’t think there has been a single day since the sun started dropping below the horizon far enough to the south that it was no longer behind Kruzof Island where the horizon has been clear. There have been a few days where it was mostly clear around the time of sunset, but there has not been much opportunity to chase a green flash.

Temperatures have been relatively warm, though a couple of days dipped into the 30s, and snow levels dropped a bit.

A couple of times this year I have noticed another peak that looks like it is north of Annahootz, and I decided to stop today and get a picture.

The peak is less dramatic looking in profile than Annahotz, but it has stood out with the amount of snow there appears to be covering it. Looking on the map, I suspect it is a 4300+ ft peak that rises over the Fish Bay watershed. It may be standing out due in part to lighting, but it’s enough higher, more north and further inland, that it also wouldn’t surprise me if it just has more snow.