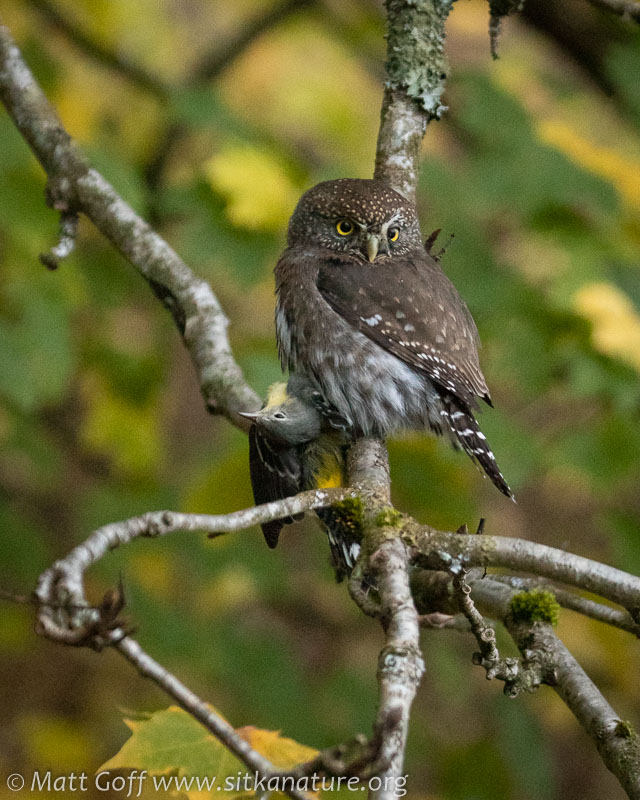 Fair warning – while there’s no blood and gore, these photos depict the darkly intimate, intense, and violent end to a Magnolia Warbler’s life in the talons of a Northern Pygmy-Owl.

I thought about writing more of a narrative, but in the end have decided to let the photos tell most of the story. (For a sense of timing, I’ve included timestamps for each photo [h:mm:ss])

As I shared previously, yesterday (October 31st) was an exceptionally good day for warblers here in Sitka.

I added two new species to my life/Alaska list (really – it’s my Sitka area list, since I am disinclined to travel), including a Magnolia Warbler, which I found at Castle Hill.

Jen C. had shown up to try and get a look at the Magnolia Warbler, and spotted a Northern Pygmy-Owl that had just flown in. 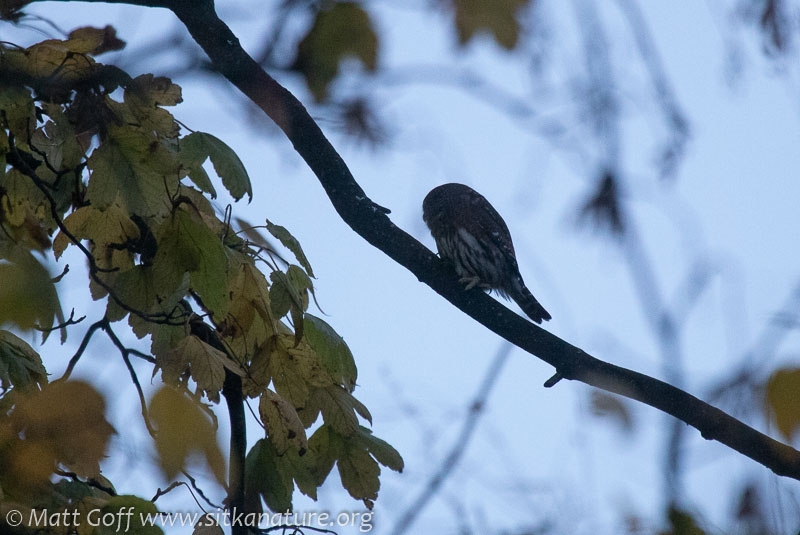 [5:14:10] In fading light silhouetted against the gray clouds, it was difficult to see much, but at least a couple of the warblers I had been watching became agitated. 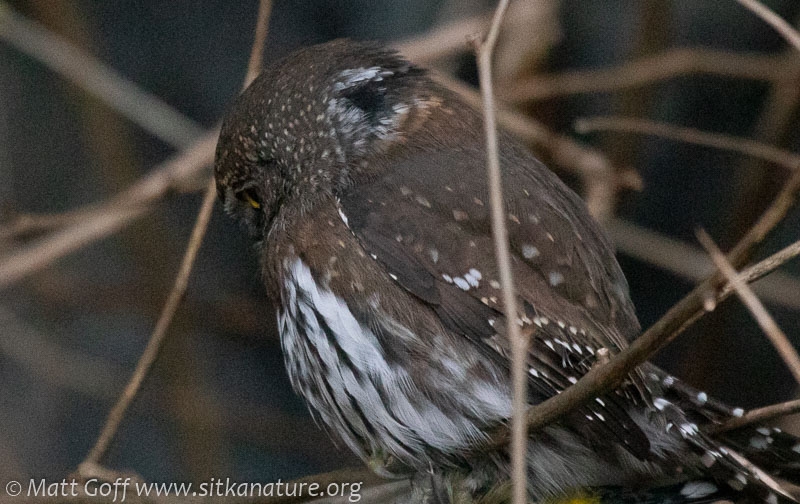 [5:15:56] I had seen something drop down, thinking it was the owl, I investigated and found it staring intently at the ground. 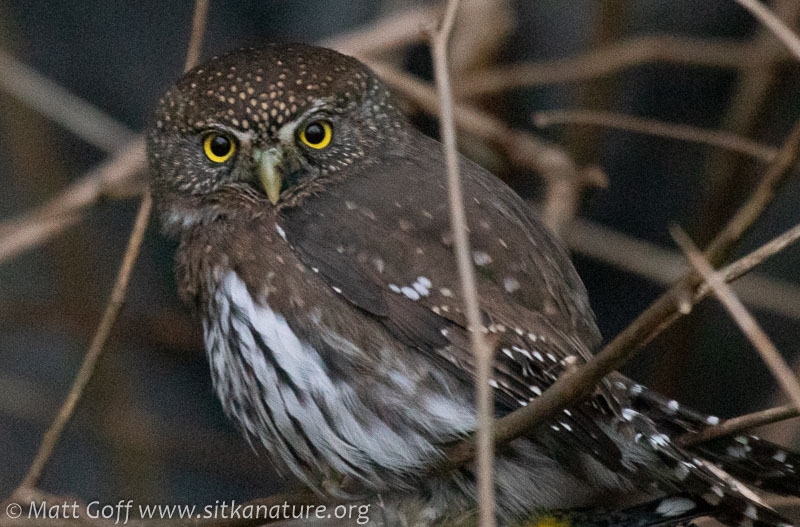 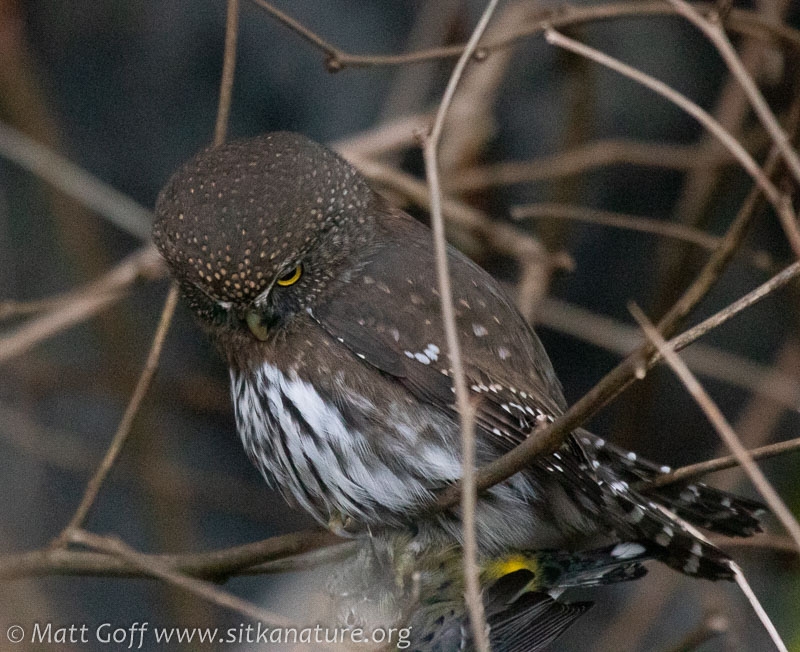 [5:15:59] It was only when it flew up that I noticed a flash of yellow below (as this photo shows, I had clearly been suffering from a bit of tunnel vision) 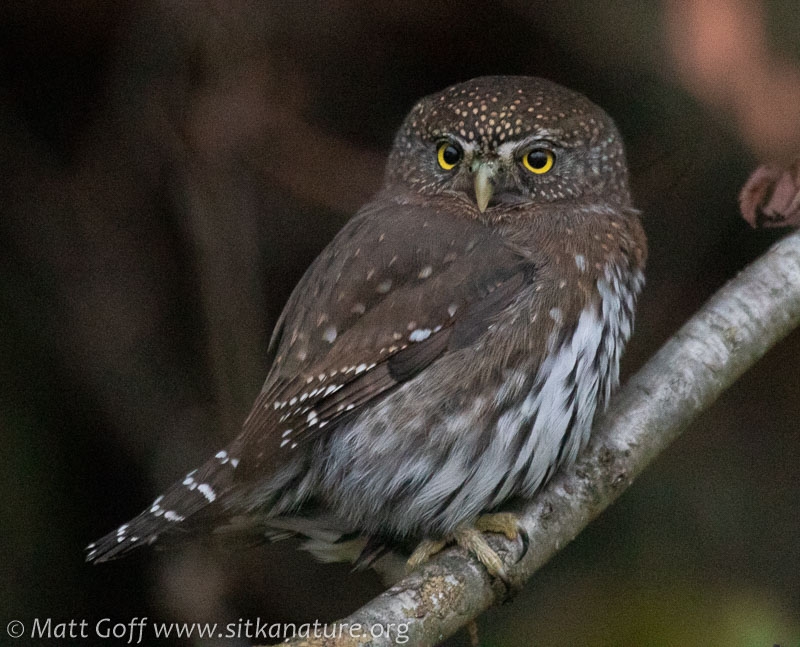 [5:16:36] On its new perch, I couldn’t see the yellow I had noticed when it took off, so I moved around for a better angle 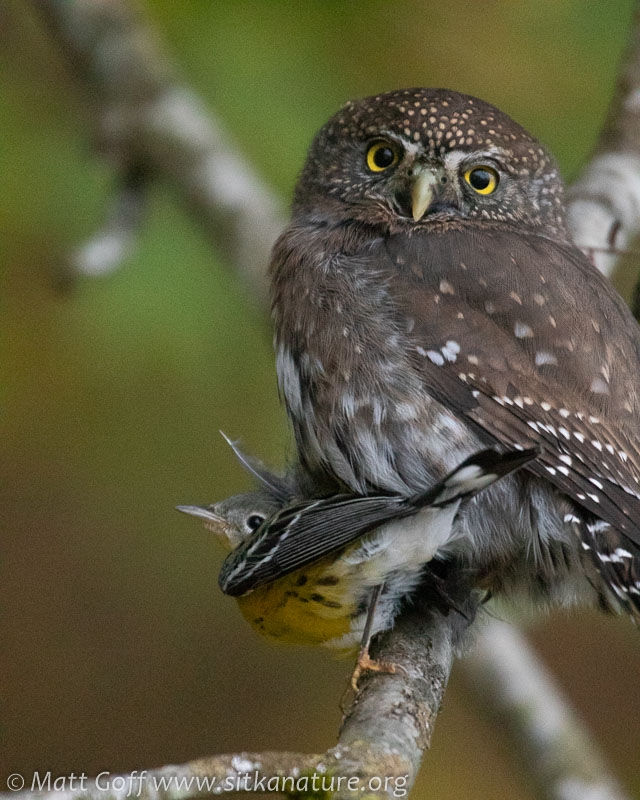 [5:17:01] The owl seemed unconcerned with me, probably 10-15 feet away at this point, I saw it had the Magnolia Warbler firmly in its grasp, clearly still alive 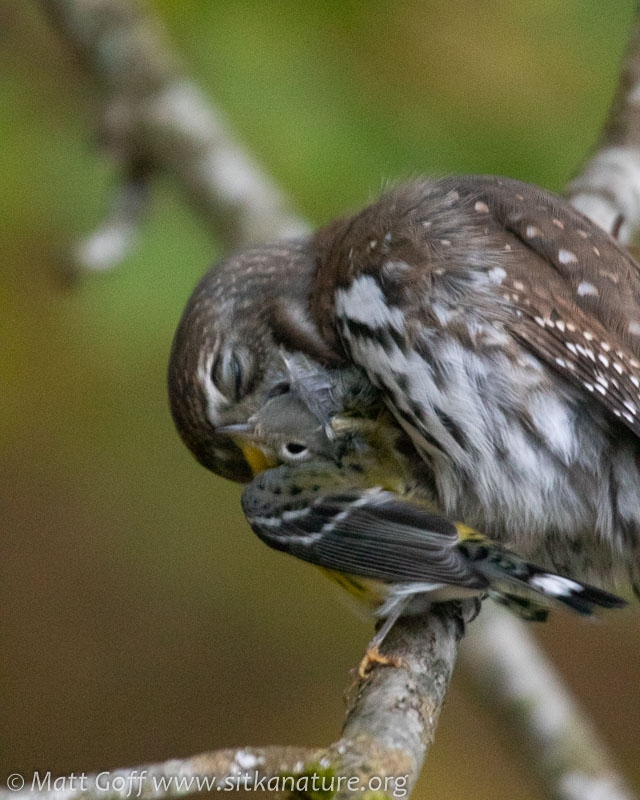 [5:17:03] My full recognition of the situation had barely flitted through my head when the owl leaned over and leaned in 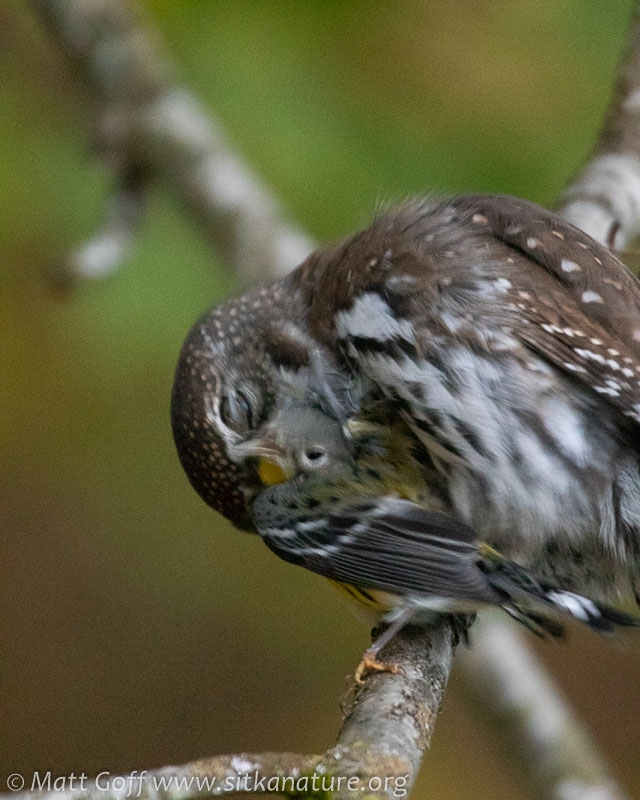 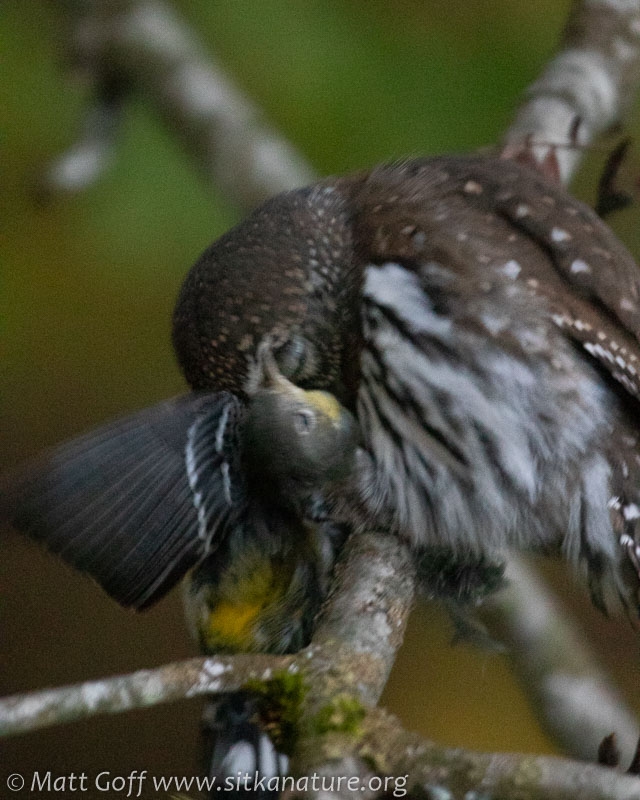 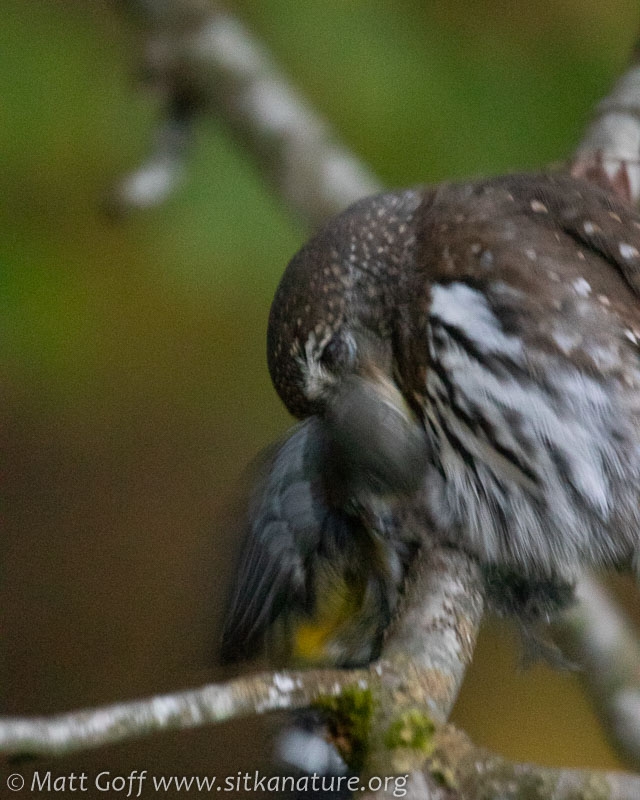 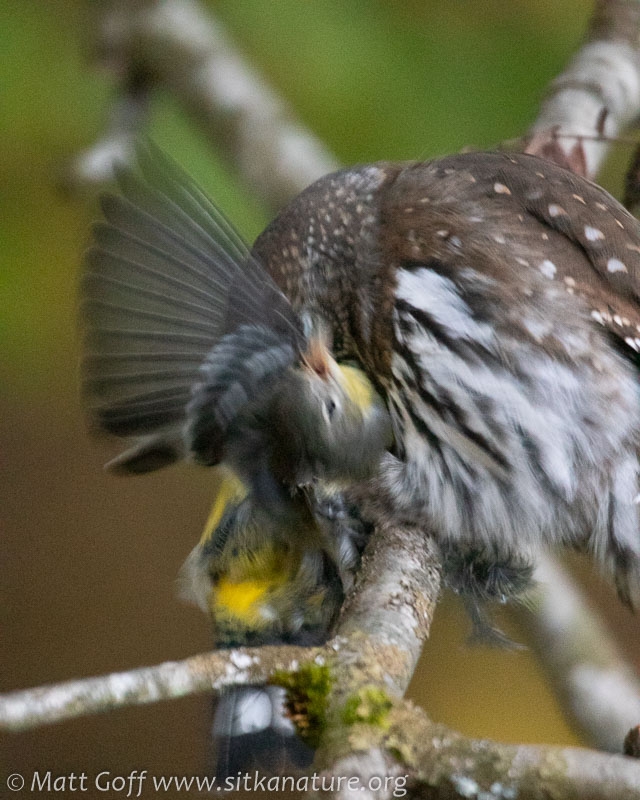 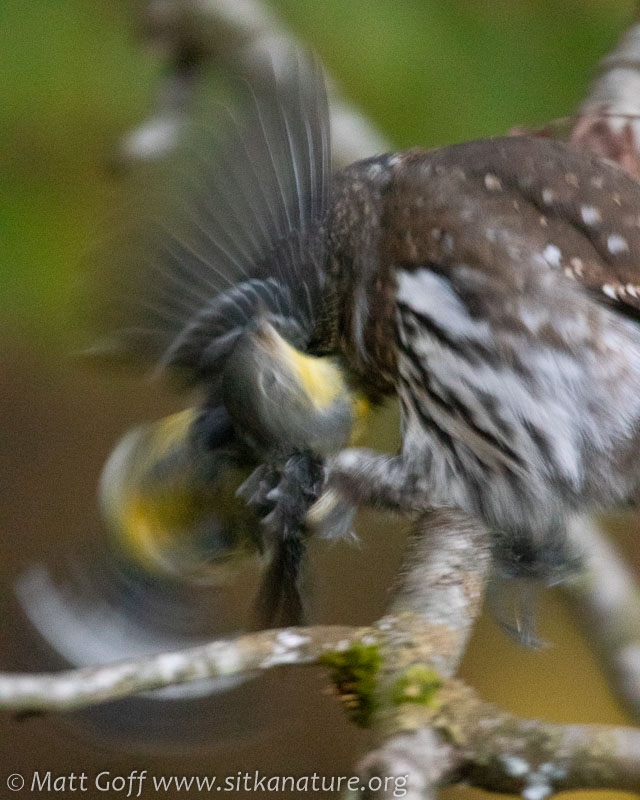 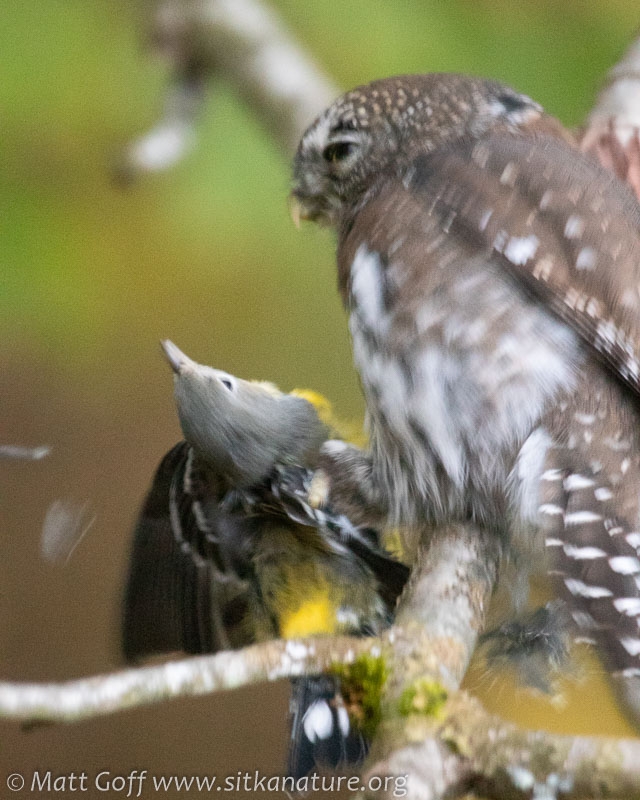 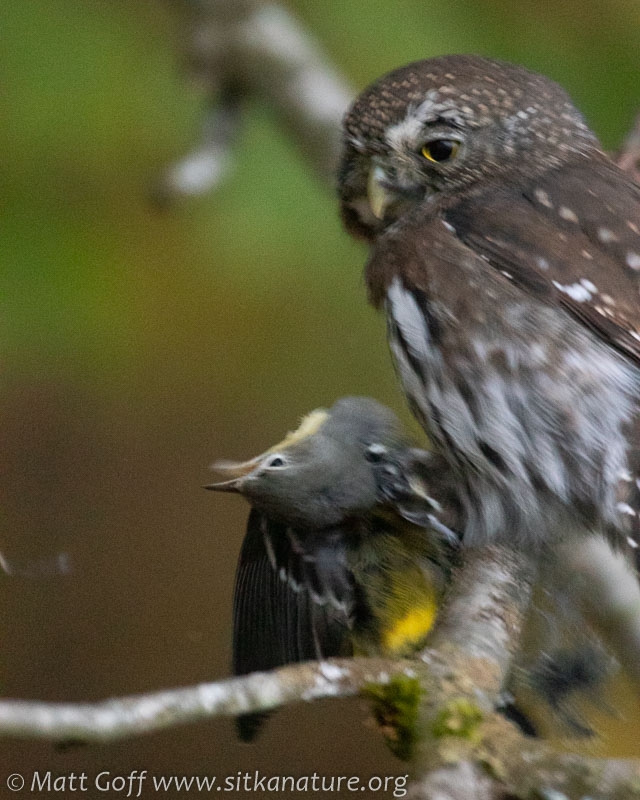 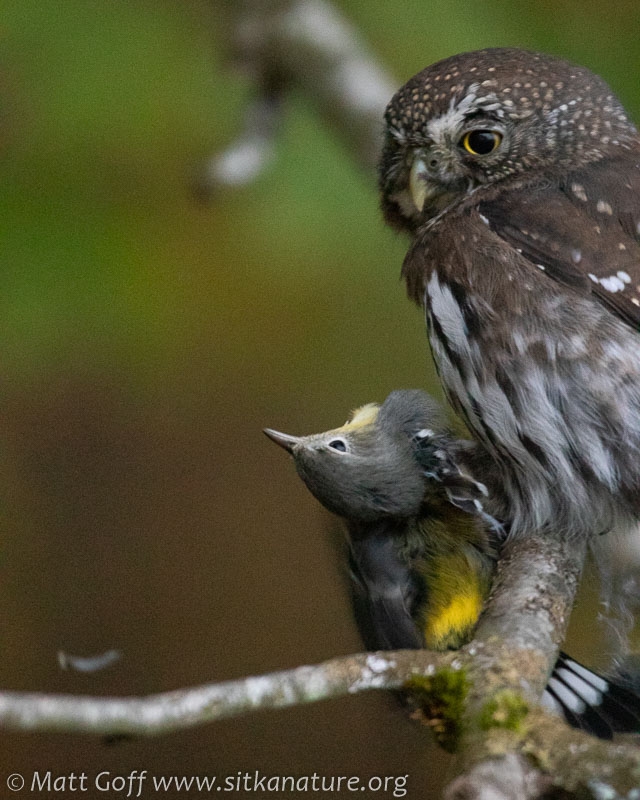 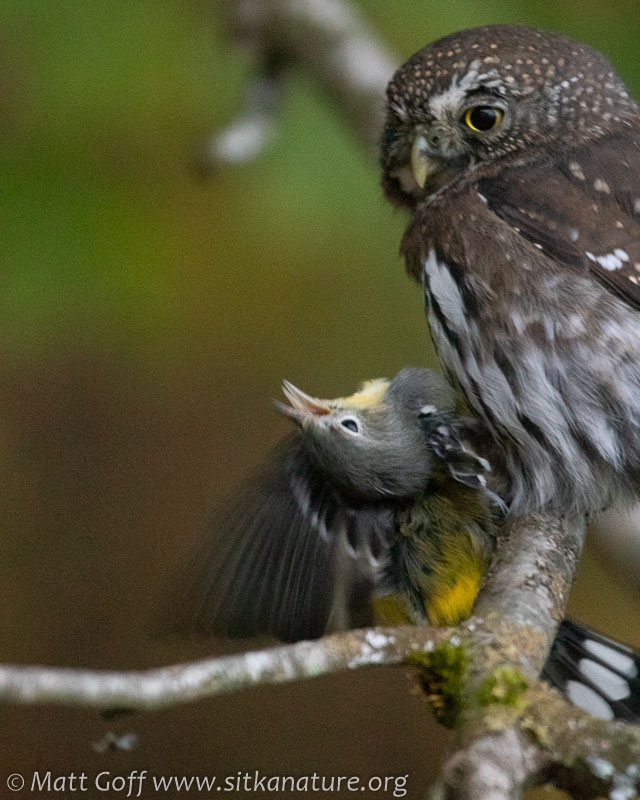 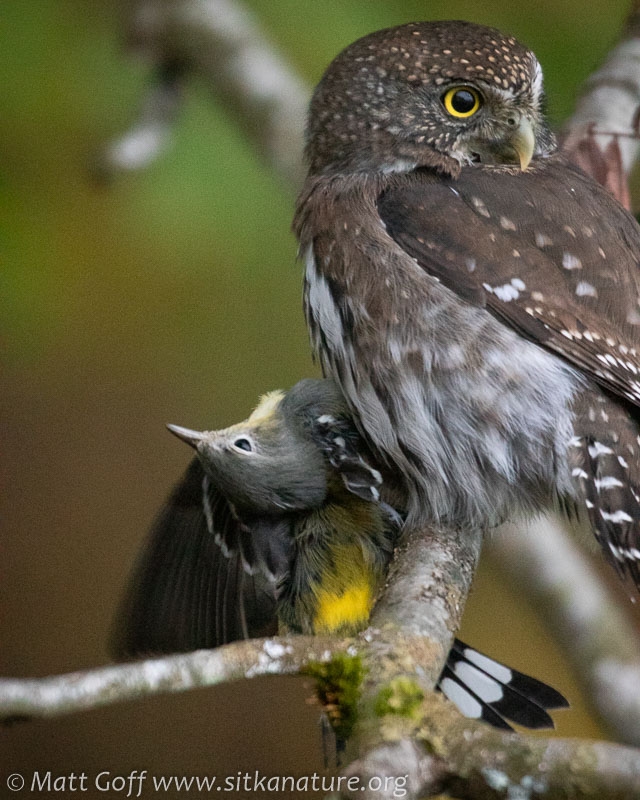 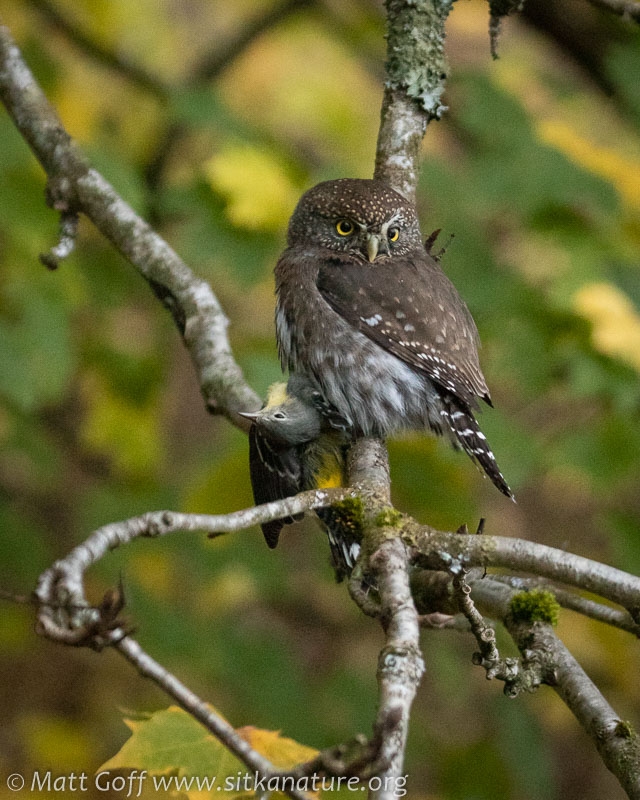 Perception of time seems to behave strangely when witnessing events that land with a certain amount of intensity. It was less than 4 minutes between the time I first saw and photographed the owl until the final shot, shortly before the owl flew away with its meal.

I am currently struggling a bit to articulate how I experienced this, and how I feel about it. Perhaps I will revisit this post and add an update if I get it all sorted a little better.

One thing I can say, I was grateful to have been a witness to the end of life for this warbler and the continuation of the life for the owl. These kinds of deaths are probably happening billions, if not trillions (or more – if you go small enough) of times a day in the natural world, but this is the first I have seen so closely in animals that I find it relatively easy to relate to.

I am also grateful for the camera technology that allowed me to photograph in dim light (These shots were all at ISO 8000 F5.6 and 1/30-1/80, depending on the shot, all but the last at 400mm focal length.) I find it helpful and rewarding to review the pictures and see what I missed (such as the warbler clearly there in the owl’s grasp when I was first getting the closer photos – something I only realized when looking at the pictures). Over the years, I’ve learned a lot by discovering in photos what I missed at the time, and learning to look more carefully in the future. These photos also allow me to share the experience with others in a way I enjoy doing, so thank you for reading!

1 thought on “Kiss of Death – A Halloween Birding Story”