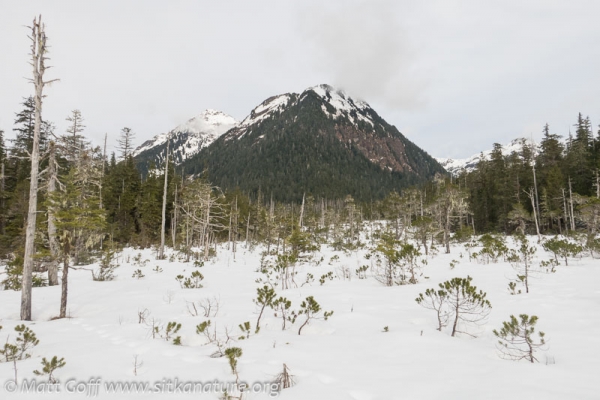 It was time to get the data from the Indian River ibuttons I’ve been maintaining or a few years (at some point I should do something with all the temperature data).

I had a call for work this morning, so the afternoon seemed like a better option. As it turned out, the weather was more favorable as well. This morning there was a marine layer with the base of the clouds around 150-200 feet as best I could tell. By late morning it had broken up to partly sunny conditions. Kitty was interested in getting out for a hike (it’s spring break at the university), so we arranged to meet at 2pm.

Temperatures have been warm for the past week, so I figured snow had mostly melted. That did not turn out to be the case, as snow in the transition to the big muskeg was still 18-24″ I think. Up to my knees in any case. It probably would have been easier walking except there’s been consistent cloudiness at night (with clearing throughout the day), so the snow didn’t get a chance to set up as ice overnight.

The amount of snow in the forest was much less, and there was very little snow/ice along the first part of the trail (especially compared to last Sunday). There was still some ice on boardwalks and bridges, and on the way back I did what I could to clear it off by kicking chunks loose.

Connor saw two Purple Finches on Finn Alley and reported one of them had been singing. 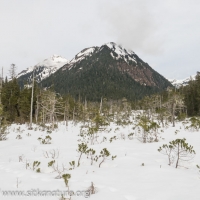 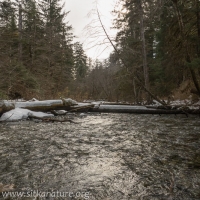 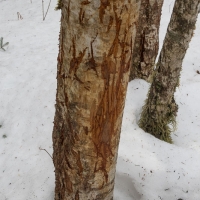 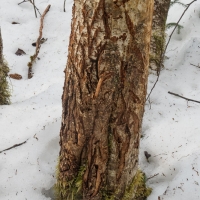