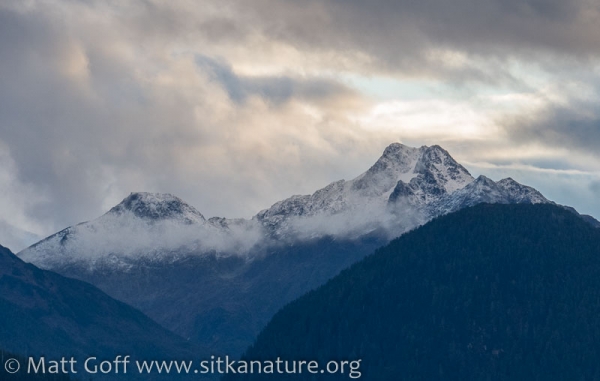 A couple of days ago Lynn emailed me about coming to Sitka in hopes of catching the Cape May Warbler that I first reported last  Wednesday. She had been up in Barrow hoping for an Ivory Gull, and was only able to get to Sitka late last night. We arranged to meet at Castle Hill this morning around 8am.

She had already been there a few minutes when I arrived a little before 8, and had seen and heard a warbler briefly, but not well enough to be sure what it was. Since she had already been looking in the maples from the parking lot, we walked around the south side of the hill to get on the trail to the top.

The juvenile Cedar Waxwing was back at the location I saw it last week, and we stopped briefly for Lynn to take some pictures. From the top of the hill we looked out over the maples, and it didn’t take long for Lynn to spot a small bird moving through the branches. It was the Cape May Warbler.

We walked partway down the stairs for a better view, and Lynn was so excited about seeing the Cape May Warbler and trying to get pictures of it, she did not even look when I mentioned the Palm Warbler right behind us (she had seen one of those in Juneau a couple of weeks ago).

We went back around the city office building to the back parking lot and continued to watch the Cape May Warbler from there. Meanwhile, both Palm Warblers showed up and were foraging along the ground, pumping their tails as they do.

When the Cape May Warbler moved out to the maples overhanging the parking lot, Lynn was able to get better pictures, and she also got good looks (and photos, I think) of the Palm Warblers which came to within only a few feet of us at the edge of the parking lot.
Having succesfully found the warblers, we agreed to meet again for lunch and I headed hope to take care of some work.

After lunch I spent another 30-45 minutes at Castle Hill and this time did not see any warblers. After only seeing the Palm and Cape May Warblers in the morning, I wondered if they were all moving on.

On my way home from the second trip, I got a call from Marge about a report of Redheads out at the industrial park. I decided to drive out and take a look to see what I could see.

On my way out, it occurred to me that there was a possibility the birds were actually female Common Mergansers, but I always figure I would rather go check out everything, even if 99 out of 100 turn out to be common birds that weren’t recognized, rather than miss the 1 out of 100 that turns out to be something unusual (like a Tropical Kingbird, to give a recent example).

In the end, I did not see any Redheads out there. Over by the mouth of Sawmill Creek I did see quite a few ducks (which appeared to be Common Mergansers, Mallards, and Barrow’s Goldeneyes, though they were far enough away, I wasn’t 100% sure about the ids).

Temperatures were still warm for the season today, though snow was down around 3600 feet or so. Winds overnight were sporadic, which continued through the day. Given the forecast, I had expected it to be pretty windy and wet throughout the day, but it ended up being pretty decent this morning, with a bit of a breeze and even some sunny breaks. Rain became heavier and more persistent this afternoon. 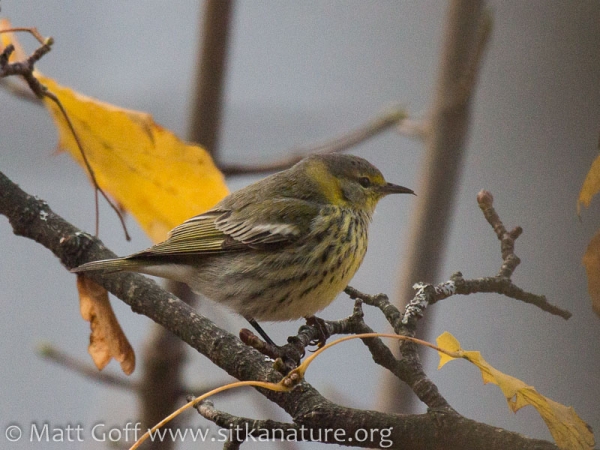