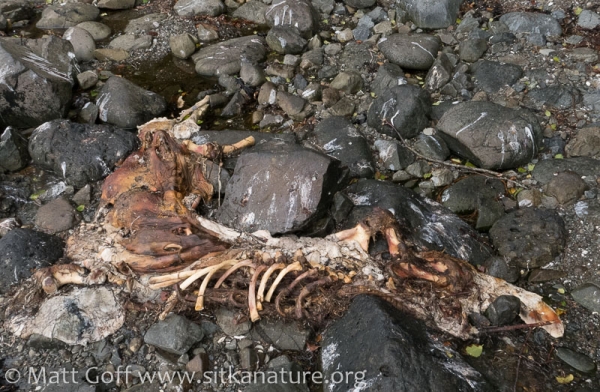 A little league all star tournament had Moller Field today, so there was no ultimate. After yesterday’s walk up to Indian River falls, I was not feeling too motivate to get out very far, so I decided to check at Pioneer Park to see if I could find any of the caddisfly larvae that were in brackish pools on the upper part of the beach.

When I got out of the car, I was a little surprised to catch a whiff of salmon spawning season. For one, it seemed pretty early, and for two, the nearest stream that hosts any numbers of salmon was a fair distance away and upwind of me. The smell did not persist, so I didn’t think much more about it and walked down the trail to the picnic site with easy access to the beach near the brackish pools. It was not quite as easy to refind the pools as I had expected, as initially I had failed to consider the vegetation (mostly sedges) growing among the rocks and partially obscuring the lower lying pools. After I realized the issue, it was easy enough to find pools to look in, but I did not notice any caddisfly larvae trundling around. It will be interesting to check again later in the year to see if they are there in the fall again.

I decided to go back to the car along the beach, and just before I was going to step up off the beach, I caught the smell of dead animal again, this time even stronger. It only took a few moments to find the source, the mostly scavenged remains of a sea lion were laid out on the rocks. I imagine it had been there awhile, as I suspect what was left would not have floated. Based on the pattern of bird droppings, I imagine ravens and eagles had been taking advantage.