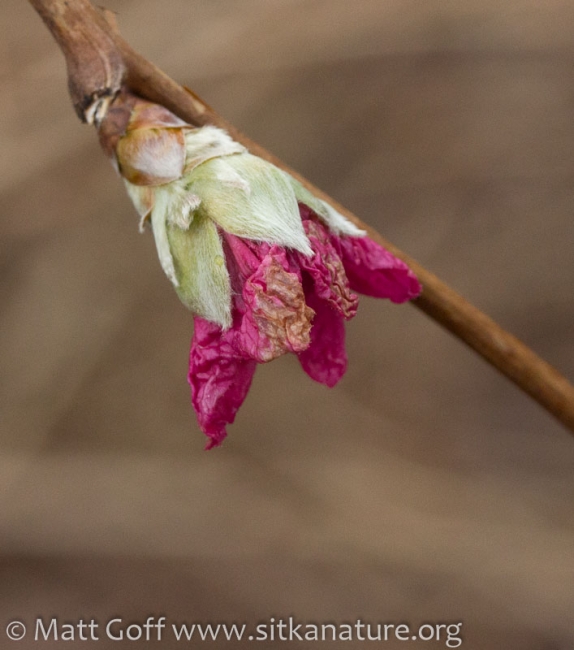 After the weekend of wind and rain, the weather was supposed to mellow a bit today before some sun showed up tomorrow. As it worked out, skies were clearing this morning and we had partly cloudy skies a day ahead of time. Yesterday’s precipitation fell as snow above about 2000 feet, so the mountain tops were covered in a fresh white blanket, which always makes for some spectacular views when the sun comes out.

Clouds broke early enough that there was frost on the windows. It was once again feathery formations, though I didn’t have time to take pictures before I scraped them off so I could drive to class. Based on what I’ve noticed this winter, I think the clearing skies after rain (at night) result in the more intricate frost developing. It seems like when nights that are clear throughout (and the car surfaces start out dry), the frost that forms is uniform.

Over the past couple of days I took a closer look at some of the shrubs that have started leafing out in my yard. I didn’t notice any frost damage on them so far. On a walk this afternoon, I noticed some salmonberries that had started to open. When I look closely, I could see a little browning on the petals, presumably from the cold weather last week. I also thought it was interesting how the petals seemed to be fully formed inside the bud, but crumpled up tightly. I’m curious if that’s true, or if they are still growing/developing as they expand.

I went by the lake in hopes of seeing the Wood Duck, but there were trees being cut on a lot near where it has been hanging out with Mallards, and I did not see any of them there. Hopefully it was just somewhere else on the lake, and will stick around for a while longer. 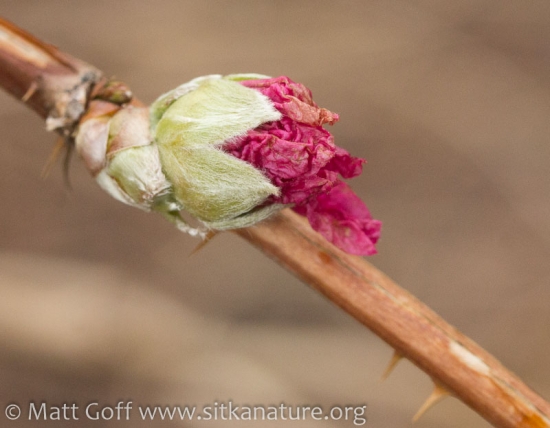