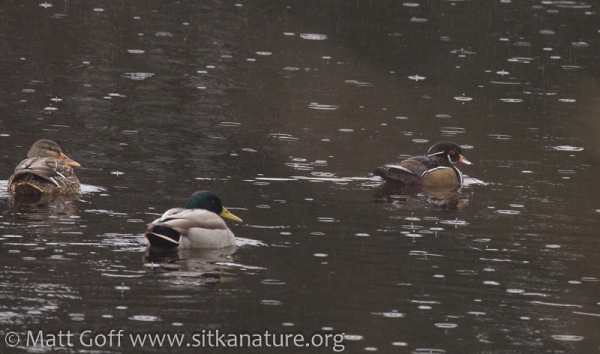 Today’s highlight was finding a Wood Duck on Swan Lake. It was out in front of the radio station with some Mallards. First reported last Sunday, I am not aware of anyone seeing it over the days since then. It was nice to be able to get a picture for documentation purposes.

Continuing unseasonably warm weather has reached the point where I look at the extended forecast and hope to see “cloudy with a chance of rain” throughout. The persistent warm weather has led to plants getting an early start at things. Many will tolerate a bit of frost, but the harder freezes where lows dip into the mid-20s or so, can kill off the new growth. Although more common in December and January, such cold weather is still not unexpected throughout February and into early March. By mid-March the chances of a cold snap seem to drop pretty significantly. At least that’s my sense of things, I guess it might deserve a look into the old weather records to see how accurate that is.

Today is part of the Great Backyard Bird Count. Although I find it easier to be enthusiastic about the count if I can go all in for the 4 day count period and find as many species as I can. I did get out with a friend who is teaching a natural history class and has assigned her students to do some counting (and so feels like it’s a good idea to do it herself as well). We spent some time out at Starrigavan, where it was a little less quiet than yesterday, but still seemed relatively low in bird numbers. In particular, the swans have left. I spoke with someone who gets out there regularly, and she said the swans left a week or more ago. This would make their departure a week or two earlier than last year, and third week in February departure was a week or two earlier than in other years prior. It’s still cold up north, so I assume they’re just moving up the coast a ways, but I would be curious to know where.

1 thought on “Warm Winter Weather and a Wood Duck”