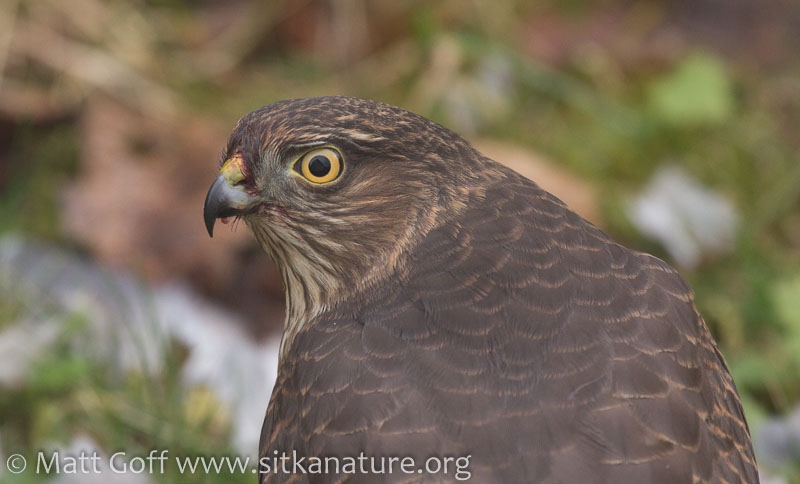 This afternoon I got a call from a friend who lives in the neighborhood. He said a Sharp-shinned Hawk had caught a pigeon in his yard and I was welcome to come by to watch it. At first I was feeling kind of unmotivated, but then he told me the pigeon was still walking around with the hawk perched on its back starting to eat it. He did not think this was going to go well for the pigeon. The image his description conjured up in my mind was sufficient to motivate me, so I grabbed my stuff and walked over. 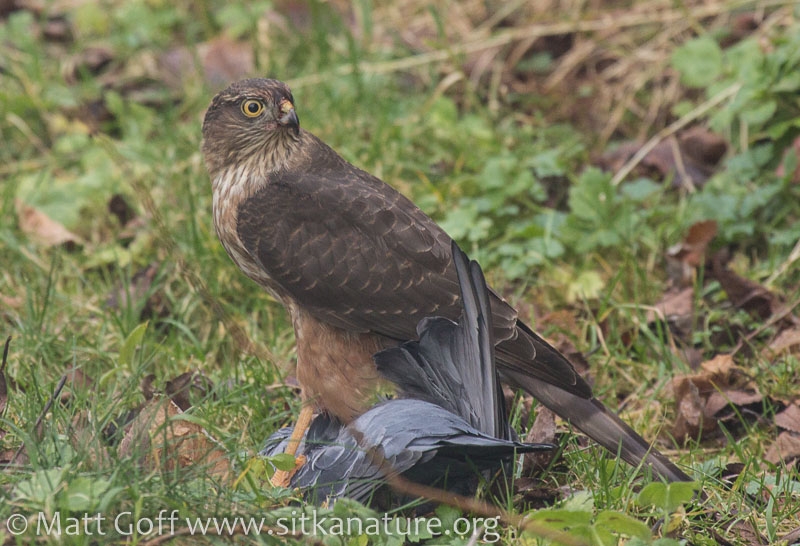 When I arrived, the pigeon was down with the immature hawk standing on top of it. I am not sure if the pigeon was completely dead yet, as I did see its wings flap a little bit. The hawk was clearly nervous about the attention it was getting, but the pigeon was too big for it to really carry. It managed to get enough lift to drag it across the yard in a couple of attempts. It finally found a place where it seemed more comfortable, and proceeded to start pulling off feathers and stripping flesh.

It was interesting to watch the hawk eat. I was a little surprised that it seemed focused on the back. I would have guessed there was more to eat on the pigeon’s breast. For whatever reason, the hawk made no attempt to turn the pigeon over. It would pull out feathers from a section, then pull up chunks of pigeon to eat. 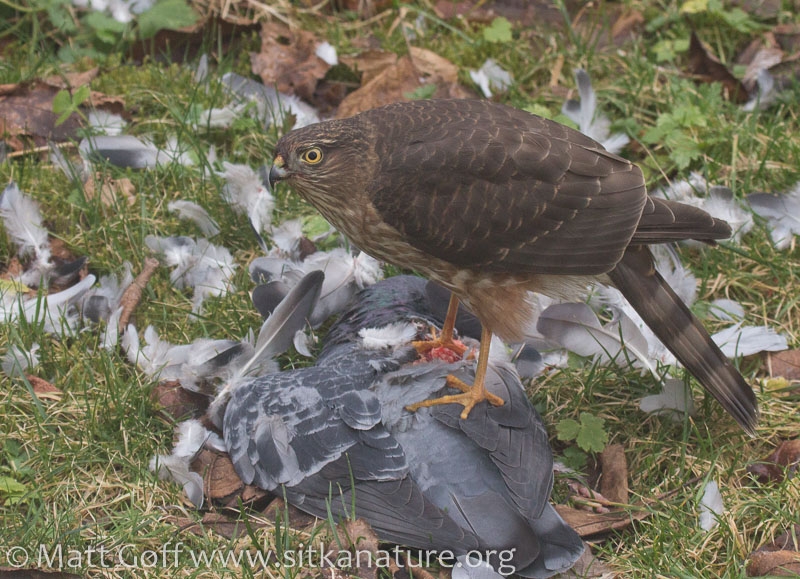 After watching for a while from a distance, I accepted an invitation to go inside and watch from a window that was only a few feet away from the feeding hawk. Though the feasting bird seemed aware of me as I watched and took pictures through the partially open window, it did not seem at all concerned. 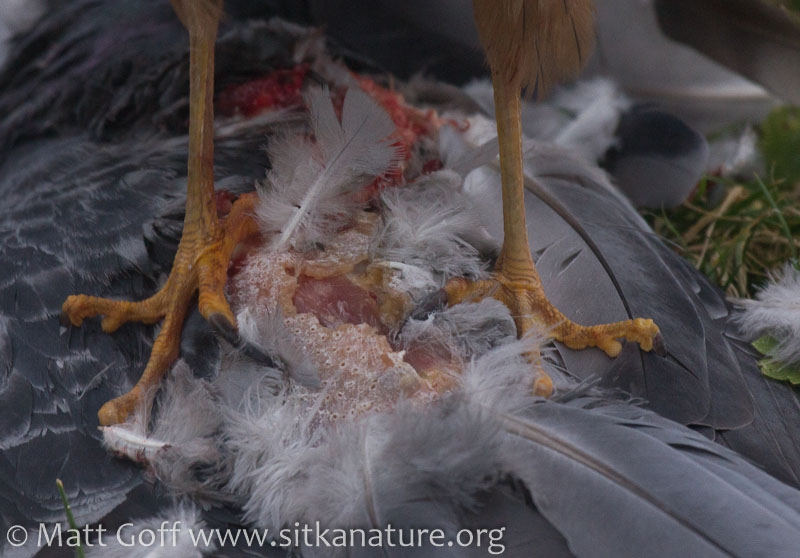 While watching from this vantage point, I could easily watch the hawk working its way down the back of the pigeon towards the tail. Initially I was a little confused, as I do not think of the tail as being a very meaty part of a bird. However, as I noticed the hawk seemed to be focusing less on the meat, and more on the outer layer. This outer layer seemed fairly thick near the tail, and it occurred to me that perhaps it was preferentially going for a fatty layer that was right below the skin. In hindsight this seems like an obvious approach, but I had not considered that a pigeon (especially one well fed from visiting feeders) might have a nice layer of fat along its back down to the tail.

In total I watched for over an hour before heading back home. During that time the Sharp-shinned Hawk made steady progress working on the pigeon’s back, but I never saw it turn the bird over. By the time I left, it seemed to have a noticeably fuller crop as well. I was curious how long it would take for the young hawk to have its fill, and what it would do at that time. I’ll have to ask about whether the hawk took off with the remains of the pigeon – no doubt there would still be good meat left, but it seems unlikely the hawk would have been able to take off with a full crop and what was left of the pigeon. 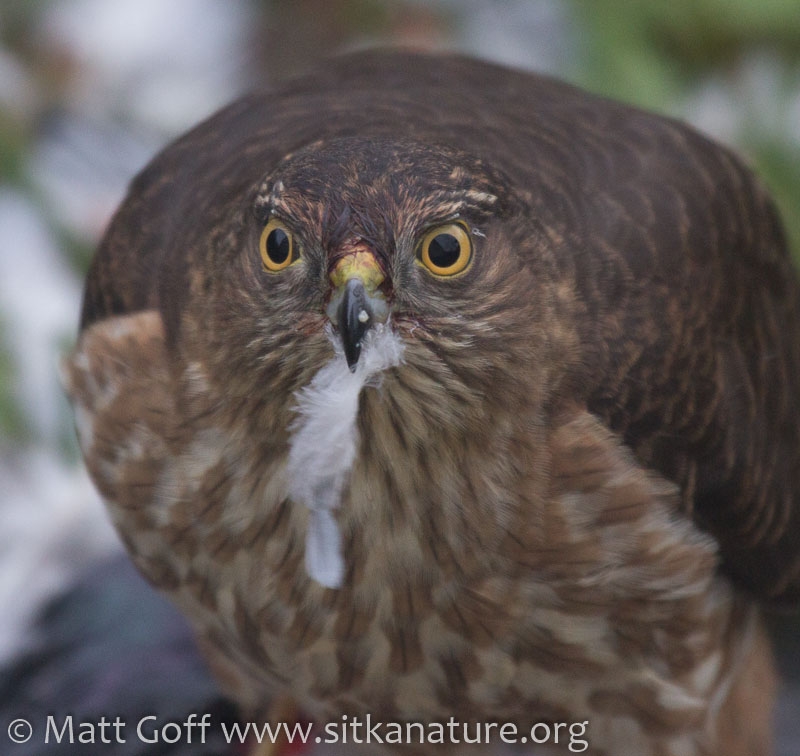 At some point along the way, I noticed the juncos came to visit feeders in the yard. They did not venture close to the sharpie, but they seemed comfortable enough. No doubt they understood at some level that one pigeon was worth more to the hawk than a pretty good number of juncos, so they were not likely to be targeted for a little while, at least. It did appear that the hawk gave them a pretty good look, though. 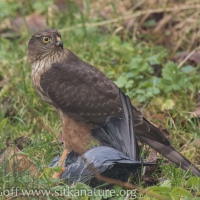 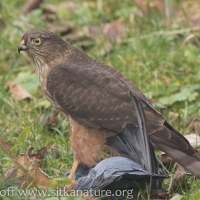 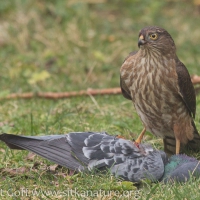 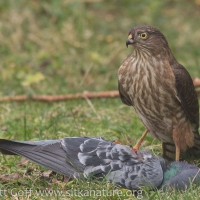 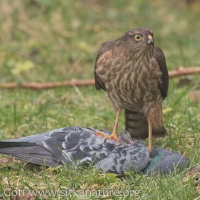 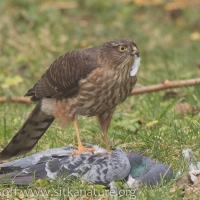 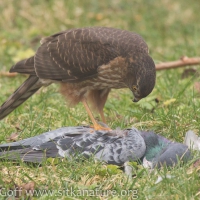 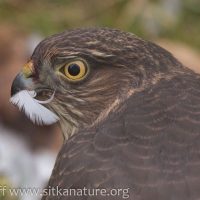 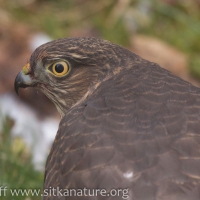 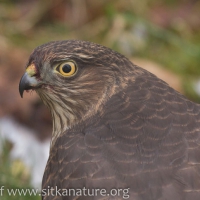 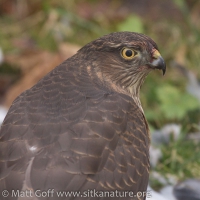 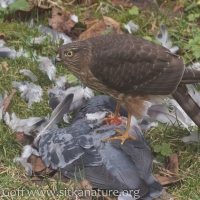 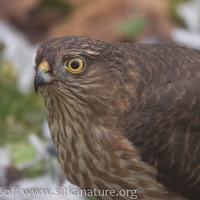 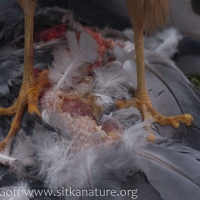 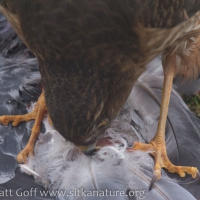 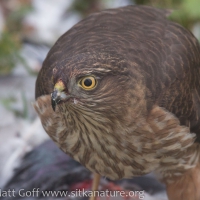 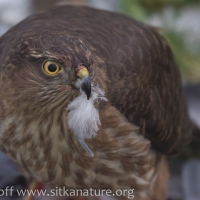 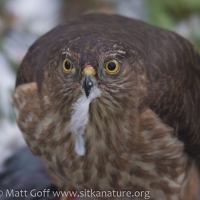