After yesterday’s strong winds and soaking rain (4.37 inches at the airport), it was nice to get up and find calm conditions with a light overcast that even had a couple of minor patches of blue showing through. I don’t know that I would say it ever actually got sunny, but the clouds were thin enough that it was possible to feel the warmth of the sun directly at times.

After teaching class this morning and getting a couple of pressing things done for my other work, I caught up with Noah, Alissa, and Kitty who were looking for fungi off of the lower Gavan trail. This was the first time I had been up there since all of the boardwalk and such on the old trail had been removed, and it was much less convenient to get to some of the places that have had a nice diversity of mushrooms in the past not far off the trail. The bigger issue is that this seems to be a relatively poor fall for mushroom fruiting (whether they fruited earlier, or not at all so far, I’m not sure). We eventually made it to the Cross trail, explored around off that a little bit in the older growth stuff (also lacking in mushrooms) and then walked along the Cross trail towards the high school. We saw where the new connector trail from Baranof Street and Pherson street trailheads will come in. It’s not yet completed, but we made our way through the relatively short section of felled trees marking the trail route (it appears these are used as a base, covered with geofabric, then shot rock and finally topped with D1 gravel). Before long we found the end of the current shot rock work, and from there the walking was easy. No one was working on it today, so we didn’t have to do any side trips to avoid the construction.

I was a little surprised to see some pink salmon in a very small streamlet (maybe a couple of feet across). Perhaps recent high water allowed them to access areas that normally would be blocked. I am pretty sure this stream ultimately drains into Peterson Creek, but it might be interesting to follow it down. I have my doubts about how successful these salmon will be in reproducing, as the stream bottom appeared to be mud/organic rather than the sand and gravel it seems like the eggs need to develop well.

On the bird side of things there were several Steller’s Jays around, and I also heard an Anna’s Hummingbird at one point while I was up there. I am not sure if it was the same bird that is regularly visiting a feeder here at the house. Connor successfully got the Steller’s Jay that’s being flying through our neighborhood to realize he had peanuts to offer. Previous attempts at leaving them on the deck rail to be found by the jay were thwarted by crows. 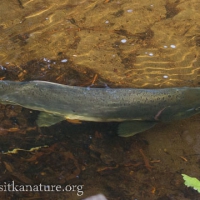