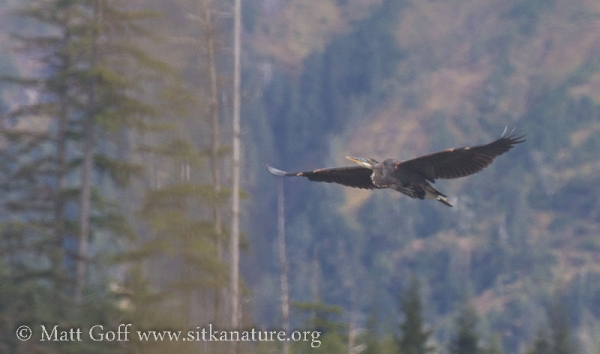 Rain on the roof last night as I went to sleep seemed like a portent of heavy rains today, given the forecast. However, I woke this morning to quiet. When I looked outside, it was cloudy, but whatever rain had fallen overnight had soaked into the ground or evaporated, as things seemed to be relatively dry. As the day went on, the overcast broke up and we were treated to partly sunny skies for much of the afternoon and evening.

Connor, Rowan and I got some chicken at SeaMart and ate it on the beach out at Starrigavan. With the sun shining, I wasn’t feeling too motivated to get back home right away, so Connor and Rowan decided to walk around the estuary trail while I relaxed on the beach. It didn’t take long for the activity of birds to get my attention – a couple of Orange-crowned Warblers were flitting along the shrubs between the beach and the road.

I decided to get up and move to the other side of the road where I could sit and face the estuary. With only occasional cars driving by, it was a relatively peaceful place to sit and watch. One of the things I hoped for while sitting there was to catch a kingfisher hovering. Just after I sat down (but before I had taken my camera out), I saw one hovering over the estuary pool. That bird stayed in the area for the entire time (maybe about an hour) that I sat watching. It made a couple of forays out to the water where it dove in to try and grab a bite, but I did not see it hover again until I had just put my camera away in preparation to leave.

During the time I was watching, I saw 3 Great Blue Herons. The first one that flew in appeared to be a young bird. After it had been there a little while, a second (older seeming to me) one flew in and actually appeared to harass the first bird. Three or four times I saw it fly over to where the first bird had landed, and the first one would take off and fly away. There was never any direct contact that I saw, but it did seem like the first bird was intimidated.

Quite a few warblers, both Orange-crowned and Yellow were working the shrubs and trees around the edge of the estuary.

Connor and Rowan saw a hawk, they thought probably a red-tail, briefly while they were up on the board walk at the upper edge of the estuary.

We saw a Merlin fly up to a tree near Baranof School when we were headed out early this afternoon. Connor had seen one this morning over by the airport when he went there to look around. I also got a report from someone else who saw what he thought was a Merlin chasing and being chased by crows down by Crescent Harbor this morning.