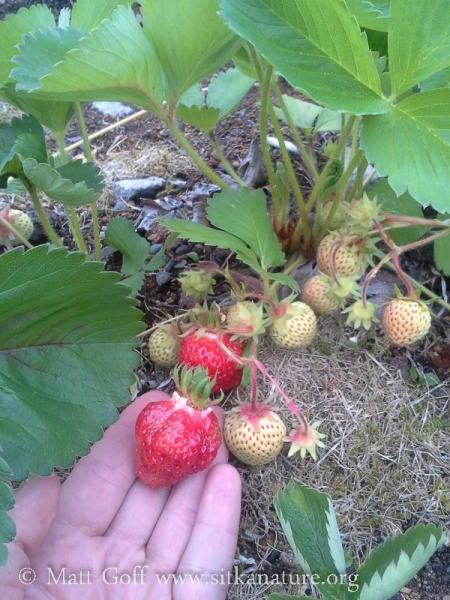 Partly sunny skies and temperatures in the low 60s made for a pleasant day weather-wise. Later this afternoon there was a band or two of light rain showers that moved through, though they didn’t last long.

I didn’t spend too much time outside today, instead playing catch up. Summer is a difficult time of year to get through all the photos and tasks to be done, but I did make it through many of the photos from yesterday’s trip up Harbor Mountain (which hasn’t been posted here at the time I’m writing this, but hopefully will be soon).

Strawberries in my yard are slowly starting to ripen. It will be interesting to see if they’ll just keep getting ripe one or two at a time, in which case I’ll probably eat them as I find them, or if a bunch will get ripe at once, allowing me to feel like it’s worth picking them to do something in particular with. The strawberries in the photo are from some of the plants I put in last year that seem to have been the happiest, as the plants are robust and the berries large (and even pretty good tasting, if I don’t pick them too soon).

While taking the picture, I noticed a spider that seemed to be moving in a way that made me think it had caught something. I took a closer look and could only see the spider was holding something down. I blew a little bit on the spider, and it moved off so I could see a small harvestman/daddy longlegs (Opiliones). The spider very quickly jumped back on its prey. I have been noticing the berm seems to be a favored habitat of these harvestmen. I’ve thought about trying to get pictures, but so far have not.

On another yard/garden note, slugs seem to like potato leaves. Fortunately Connor’s young roosters like slugs, it’s funny to watch them come running over if I walk over to the pen. They very quickly snap up any slugs I drop in to them.