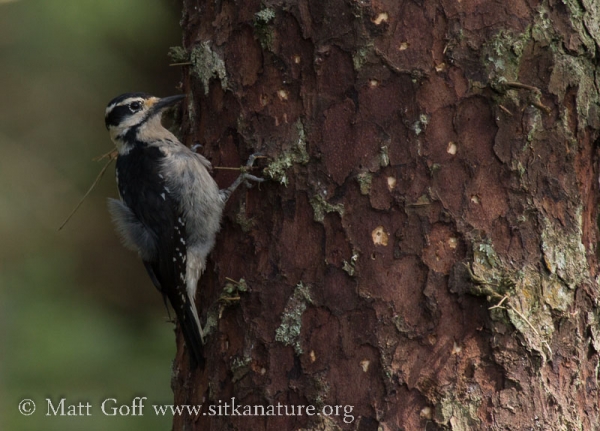 I took a relatively quick walk around Totem Park this morning. I was a bit preoccupied with some things, and I wondered if that had something to do with how flighty the gulls were when I started to approach them out near the river mouth (which was pretty far out, as the tide was a -1). It’s possible they are just a bit jumpy because they’ve been feeling some pressure from predators, but my sense is that on other occasions I’ve walked even closer than I did today and not had the take off. Perhaps also because I was preoccupied, I did not see much in the way of birds. I heard the usual suspects singing, and did see a few shorebirds.

In the forest I heard a woodpecker, and stopped to look for it. I was able to locate it on a spruce tree not far off the trail. I think it was actually the same spruce tree I saw a Downy Woodpecker in a week or two ago, but this one was a Hairy Woodpecker. I didn’t notice it at the time, but when I looked at the photo, it was interesting to see all the marks in the bark, presumably from woodpeckers foraging. I wonder if the insects are especially plentiful on that tree, for some reason.

Conditions during late morning while I was out were sunny with a light breeze out of the west. It remained sunny through the afternoon and into early evening, but a thin overcast was moving in later in the evening while I was doing some work out in the yard.

While out in the yard, I noticed the white-winged eagle flying overhead. I also was interested to see an unbanded Song Sparrow sneak into the yard and pick up some of the seeds remaining in and around the feeder (we’ve not been keeping the feeders filled since it got to be spring). 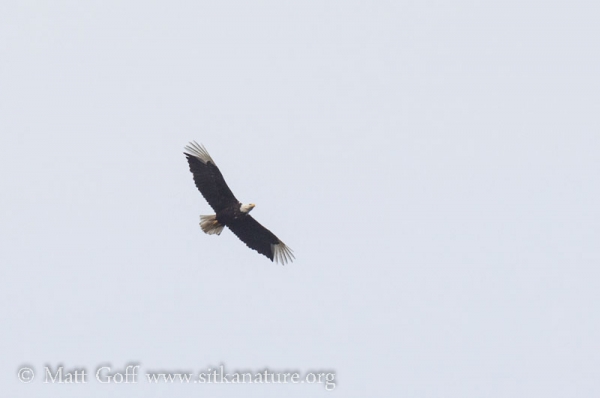