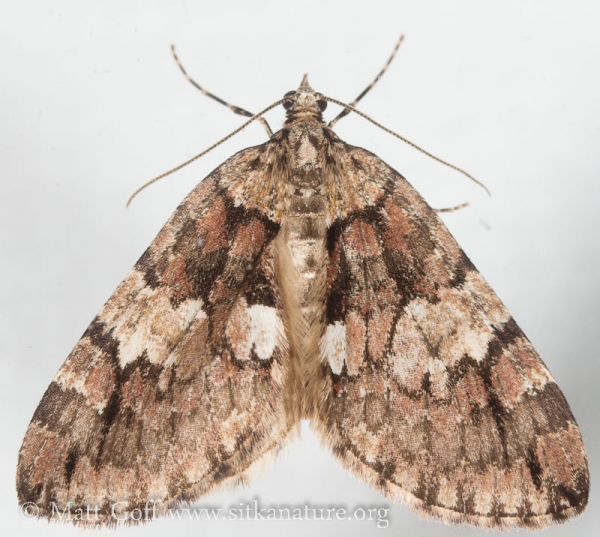 Today’s outdoor time consisted primarily of a walk around the park this afternoon and some time playing catch up at Kreuger field this evening, though when moving the trash can to the curb this morning I did notice that it seemed to be a pleasant and calm morning. I had originally intended to head down to the park this morning, but was feeling extra tired – something that’s been a recurring theme of late, I’m not sure if I’m just not getting adequate sleep at night, some allergies (maybe alder pollen?) are making me feel groggy and sleepy, or if it’s something else (or a combination). In any case, I ended up taking a couple of naps today, which cut into time I might have otherwise spent outside looking at spring.

After this morning’s calm, things got a little more lively. Showers moved through, and while it never got really windy, the breeze did come up and we had some rain. The nice thing about showers is they are often accompanied by sun breaks, and today was no exception. The sun came out a few times as the afternoon proceeded into evening.

It’s been a quiet year so far in terms of spring migrants. I know I’ve not been getting out as much as I have in some past years, but it seems like with the exception of the large flocks of Surfbirds that were at the park a week ago, the number of shorebirds is down so far. It’s early enough we could still see large numbers showing up. I’m wondering if the warm year has prompted them to fly straight through. Another factor could be the storm that was south of here this week. Ketchikan and hurricane force winds recently, and I imagine that sort of system probably has an impact on the migrants.

The understory in the park is really greening up. I guess I hadn’t ever noticed before just how late menziesia leafs out, as it’s just now starting, but the lime green leaves of the huckleberries and slightly darker blueberries are nearly full grown, and many of the deer heart leaves have unfurled to cover the ground with green.

Today’s photos are of a moth I noticed on the outside of a building where lights are on all night. So far this season I’ve seen a lot of Variable Carpets (Anticlea vasiliata) a handful of Northern Thallophaga (Thallophaga hyperborea) and maybe a couple of other things. Today was the first Hydriomena irata I’ve noticed so far. 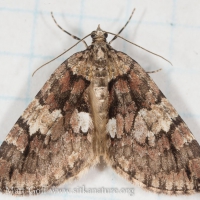 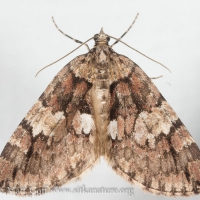 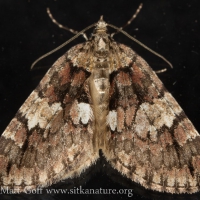