I went for a relatively quick walk around the park this morning. I didn’t find anything new there except a fruiting Polyporus sp (that hopefully I can get identified to species at some point). I stopped by castle hill to take pictures of a Porella (I think maybe P. cordeana, which would be a new species for me), before going over to John Brown’s Beach to show a friend the mystery plant from a few days ago. The mystery plant turns out to be the introduced St. John’s Wort (Hypericum perforatum), a species I’ve only seen once before, and that was a while back, so I don’t feel so bad for not recognizing it. While there, I also noticed some neat little new-to-me fungi, the Fluted Bird’s Nest (Cyathus striatus). Not far off the shore was a breeding plumage Horned Grebe, so that was a fun sighting. It’s the first one of those I’ve seen in fresh plumage. Unfortunately the tide was up and the waves were crashing a bit much to get out to the edge of the water where I could get better photos of it.

Weather today started out partly cloudy, then for much of today it was mostly sunny. This evening (around 7pm) heavy dark clouds were moving in from the south, and there was a pretty good wind. Tomorrow calls for wind and some possibly heavy rain. It might be a good day to look for some migrants, but I’m not sure if I will be motivated enough to brave the weather. 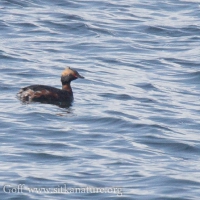 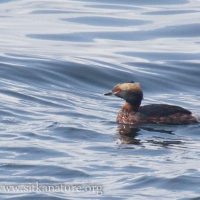