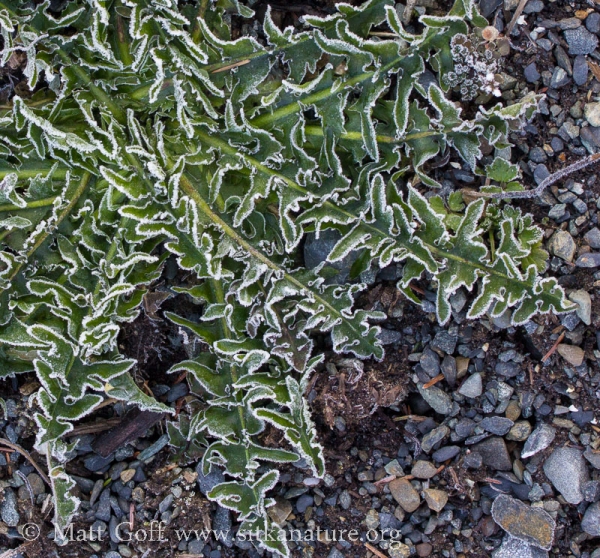 Last night when I went out for a little bit late, I noticed the stars were shining brightly (I think I notice Mars, as well). At the time it wasn’t really frosty, but I wondered if it might end up becoming so. This morning when I set out to take care of filing my taxes just after 8am, there was a good bit of frost on many things. I was especially struck by the frost edging of many leaves (especially the dandelions).

It turned out the tax office didn’t open until 9am, so I walked over to the bridge and took some pictures of the softly lit, snow-covered mountains. It was one of the few times this winter I’ve seen Mt. Edgecumbe well covered in a blanket of snow.

It appeared a layer of overcast was moving in from the south, and as the morning went on, that’s what seemed to happen. This afternoon I noticed an interesting cap of clouds on Mt. Edgecumbe with a trailing line of cumulus clouds. Unfortunately by the time I had a chance to try fo a picture, it had broken up and was less compelling to me).

I stopped by the Turnaround and found a lone Marbled Godwit. It’s the earliest (by one day) that I’ve seen one here. More typical is the last week of April. I wonder if it’s the one that stayed so late last fall. Perhaps it didn’t actually go very far south and is already headed north again.

Tonight’s sunset was quite colorful. My house is situated in a good place to see that the sunset has a lot of color, but it’s not the best place for nice sunset photos (unless you’re a fan of utility poles/lines, houses, and roads as foreground objects). I could see through the trees a very nice alpenglow on the Pyramids when I went out to look. Over the the next 20 minutes or so off to the WNW the clouds shifted from a peach color into deeper and deeper pinks and reds. 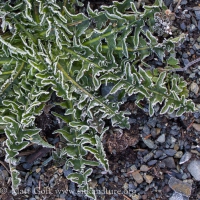 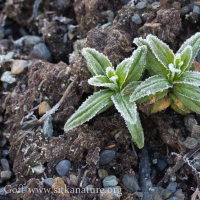