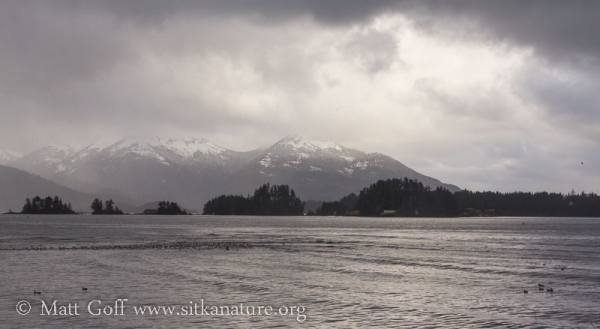 Weather today was pretty mixed. The snow level on the mountains (as judged by snow-covered trees) was down quite a bit and Connor told me there was even a bit of wet snow on the ground in town early this morning, but it was melted before I took a look around outside. Yesterday’s rain gave way to showery weather today. Sometimes such weather has ample sun breaks, but today’s were few and short-lived. Showers included some sleet and heavy rain at times, though fortunately the precipitation was also not especially long-lived.

This afternoon I went for a walk with Mads, a fellow from Denmark who is on an extended visit to Sitka. He’s interested in natural history, so we took a short walk around the park and talked about birds, flowers, and bryophytes. Having spent nearly two decades now specifically working to get more familiar with the plants and animals that live here, it’s easy for me to take for granted the ability I have to recognize (and name) many of the things around. As I walked with Mads and shared some of the names of plants that we were seeing, I was struck by size of the challenge to start from scratch and learn what is here. Of course there are still a great many things I barely recognize and/or don’t really know at all. One of the ironies I think is that since there is so much that I do recognize, it’s easy for my awareness to get lazy and gloss over those things that I don’t. It takes some extra care to continue to look closely and try to catch those things I might have previously overlooked. I enjoyed getting the chance to share some of the things I’ve learned and be reminded of the experience and value of having fresh eyes when wandering around in nature.

Along various shorelines there were many gulls congregating – I think something must have been up with the herring eggs. The gulls were not as abundant/concentrated as when herring are spawning, but they were definitely feeding as the tide was up. Perhaps there were some herring eggs knocked loose by the rougher weather and the gulls were taking advantage of the drifting eggs? I didn’t actually go down to the water to see what I could tell (and now kind of wish I had).