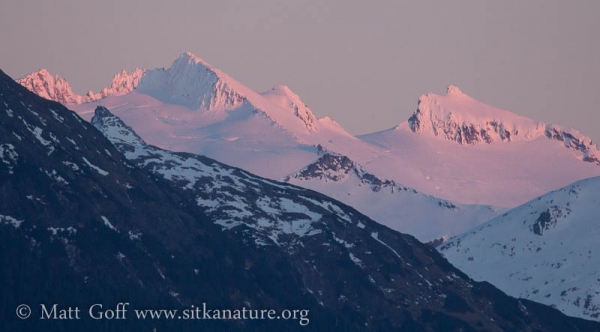 I’ve been following a weblog called From a Glacier’s Perspective for some time, and had been particularly interested in the posts about glaciers in Southeast Alaska. I recently left a comment to request the author take a look at Baranof Island glaciers, and he graciously did so, writing a post on Carbon Lake glacier retreat and the Mahsa Icefield retreat and separation.

Carbon Lake glacier is on the east side of Peak 5390, the high point of Baranof Island. From town, we can see the smaller western portion of the ice cap surrounding this peak (seen in the photo leading this post). Much of the east side glacier ultimately drains into Carbon Lake. For some years I’ve been curious to go over and explore Carbon Lake, the valley bottom between the lake and the mountains looks interesting, and I’ve thought there could be some interesting stuff (plant-wise, in particular) near the glacier.

Although I’ve never heard the name “Mahsa Icefield” before (and am curious where it came from), it refers to the glacier on the cross island route. Locally I’ve heard it called “Indigo Glacier” (though not for quite a while) and occasionally (tongue in cheek) the “Ohio Glacier”, but whatever its name, it is a familiar one for anyone who has hiked across the island between Medvejie and Baranof Warm Springs. (The route even has its own Baranof Cross-Island Trail wikipedia page.) It’s impressive to see the satellite imagery showing how much it has retreated. I know Dan Evans has been travelling that route for 30 years, so I imagine he’s seen first-hand from the ground how much different that icefield looks.

As part of the second post, a brief look is also given to a smaller glacier that ultimately drains into Glacier Lake, Blue Lake, and down into Sawmill Creek. I’ve been wanting to visit Glacier Lake for some time, but have yet to make it all the way up there. This glacier was looked at in more depth by Sitka-raised Ben Hughey and a co-author as part of a university project at Dartmouth. The paper is available as a PDF (Quantifying Glacier Retreat on Baranof Island).

If anyone out there has photos showing Baranof Island glaciers at various times over the past decades (whether from the ground or air), I think it would be interesting to see them and maybe compare across years.

Thanks to Mauri Pelto of From a Glacier’s Perspective, and Ben Hughey (along with his co-author Alexandra Giese) for these looks into the glaciers of Baranof Island.