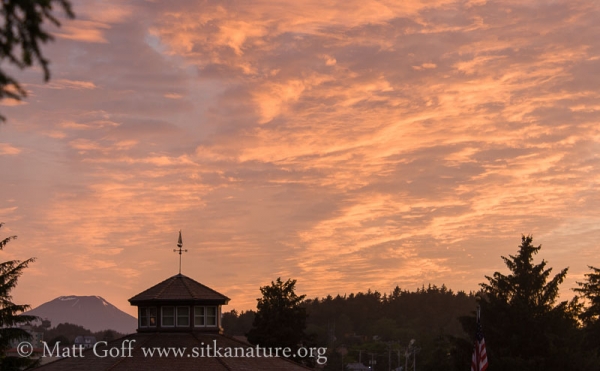 The forecast today was not particularly inspiring (100% chance of rain), and I had some work to do, so I didn’t pay too much attention to what was going on outside. By later in the morning I started to wonder about the forecast, as it seemed much brighter than I would have guessed, and no rain had yet fallen. This afternoon turned out to be partly cloudy, with much of the blue sky concentrated over town. There were large gray clouds out over the sound, and by mid afternoon they had moved in and started dropping a pretty good rain. I managed to spend some time out enjoying the sun on the south side of the house. There was a bit of a breeze, but the sun felt very warm.

The birds seem to be dispersing – there are still quite a few juncos around, but just over the last few days the flocks seem to be thinning significantly.

I’ve been continuing to work on the photo backlog (still way too many to go, but steady progress will eventually get me there). The photo with today’s post is from a set I took back on 8 July 2010 and finally got posted on my site this week. It was a rather spectacular sunset that I watched from Hillcrest Drive (where I was living at the time). As an aside, if you’re interested in getting notification when I get these back dated older posts published, you can subscribe to the blog via e-mail over in the sidebar to the right.