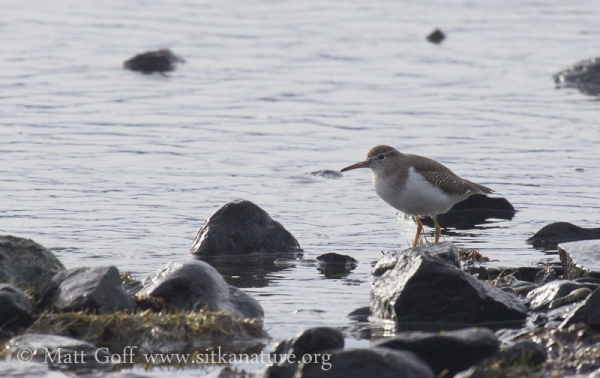 After the snow this weekend, today’s forecast was for mostly sunny and temperatures into the upper 40s. After making sure to shut my computer down by 11pm last night (having spent too many previous nights not getting to sleep until well after midnight), I woke up around 6am this morning and felt pretty good about getting up. It was overcast throughout much of the morning, with skies gradually clearing as the day went on. By late afternoon it was sunny and pleasant. I think the high ended up being 49 (or at least that was the highest I noticed).

I spent some time doing my bird sit this morning between 6:30 and 7. There not many juncos in the yard, but I could here some off to the WSW that sounded like they were alarming. It did not seem to be constant (thought it was a little hard to tell due to traffic at times). I could also hear robins tutting, and from time to time a group of them would fly rapidly out of the spruce where they have been roosting. I did hear a bird a couple of times (that I’ve heard at least one other time recently) which I don’t quite recognize but suspect might be a non-eagle raptor. It didn’t call enough for me to really narrow down where it was coming from to look for it.

After sitting a while, I decided to walk down to Market Center. Along the way I passed where the juncos I heard previously were still calling. While I had thought they were alarming, I began to wonder if it was more of a grumpy wake up or something. I noticed a few more juncos and robins that (at least to my ears) sounded a bit agitated. I did notice a couple of the juncos chasing, and robins would occasionally fly quickly off in a group, but there didn’t seem to be any coherent sort of behavior overall, so I’m thinking maybe it was just part of the morning routine this time of year (when hormones are starting to ramp up, and they’re getting more aggressive).

Later in the morning I went for a walk around Totem Park. There were several sapsuckers on the east side of the park, and I finally got some pictures of the Spotted Sandpiper that’s been wintering here, although bird season-wise, we’re now into spring. This evening on another walk to the park I spent some time looking at lichens and bryophytes with friends.

My other outdoor adventure today was getting my kayak in the water for the first time in at least two or three years. On my morning walk to the park it had been calm, so I figured it was still in the early afternoon, but I discovered the breeze had picked up a bit when I got down to the harbor. I mainly wanted to just give the kayak a try and make sure it wouldn’t just sink. I ended up paddling from the harbor around the breakwater to Sage Beach. I got out and sat on the beach for a while before deciding to paddle back to the harbor instead of carrying my kayak home from the beach. It seemed like a successful first outing back in the kayak after such a long time away.

After returning, I was approached by someone from the US Census who was doing a monthly household survey. It turned out my house had been selected, and as the only adult living in the house, I was the one who would be surveyed. It was pleasant out, so I answered her questions while cleaning off some of the accumulated algae/biofilm that had grown on the kayak during its long time out of the water. I was a little surprised at comfortable the juncos and Song Sparrows seemed to be with us out there. The female Anna’s Hummingbird also came by, she seemed to want to go under the stairs, but between the interviewer sitting at the base of them and me standing nearby, she decided to just stick to the feeder, I guess (though she did come pretty near each of us a couple of times).