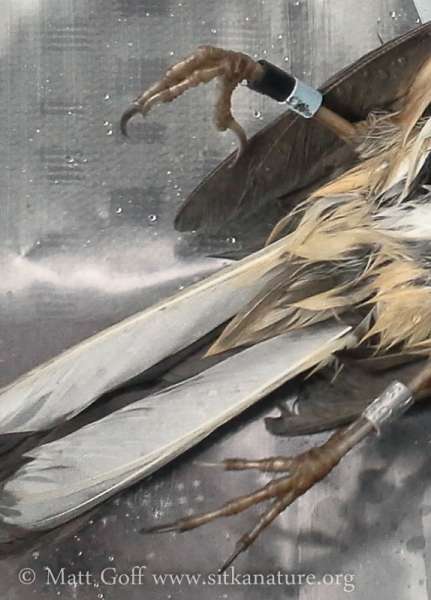 It was a blustery rainy day with temperatures in the 40s. Rain wasn’t steady, instead moving through in squalls, some of them fairly fierce as the day went on into night.

I returned home from being out to a message from a fellow who had found a banded bird dead in his feeder. I called Carl back and took him up on his offer to let me come get the bird. It was one of the uniquely color banded birds so I could find out that it was originally captured at the Path of Hope on 20 November 2013. This particular bird had not been reported until today when it turned up face down in Carl’s feeder. Carl said he thought at first the bird was eating, but it didn’t move, and when he checked he saw it apparently just died there on the feeder. He was going to bury it in his garden until he noticed the bands and thought someone might be interested in getting it. I was glad he made the effort to get in touch with me to let me come get it. At the time of banding, Gwen (the bander) was uncertain of its age or sex. I am not certain (and didn’t look that closely), but my impression was it had a darker head that I usually take to be associated with male birds.

I sat for a while this evening on the south porch. The juncos seemed to be absent, but a Song Sparrow repeatedly tseeped, I think at me. For much of the 10 minutes or so that I sat, I watched the clouds moving from south to north off to the west of me. A break in the clouds further out allowed the low angle sun to illuminate the near ones and create some separation between clouds that otherwise were blending into a mass of grays. Near the end of my time, what I have been presuming to be the wintering flock of robins flew towards the north (off to the west of me) in a big group (I counted nearly 30). I’m not sure what got them all moving like that, though maybe they were just in late in the process of gathering up to roost. They were moving fast and far enough, that I thought they might be headed elsewhere for the night, but they ended up circling back around and landing spread out in several different trees. I think they ultimately ended up in the large spruce on the corner of Park and Biorka where I’ve noticed them going several times in the past couple of weeks, at least. I imagine that soon there will be robins coming in from the south and these will perhaps move on to the north, and this wintering flock will be no more. Robins don’t always winter here, so it’s been interesting to have them around. I’m sort of curious where they go during the day, because I don’t usually notice them when I’m walking around the neighborhood (not that I’ve done a lot of that, lately).