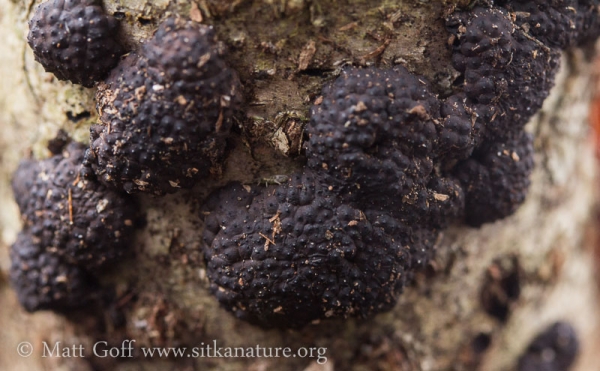 There was a pretty good extended snow shower this morning, though I didn’t venture out into it. I was feeling pretty tired and possibly fighting a cough, so I decided to spend the latter half of the morning resting. By early afternoon, temperatures had warmed enough to turn the precipitation to rain, and what little snow had accumulated did not last long. As the afternoon wore on, the wind started to pick up as well. On a brief excursion outside later this evening, I was surprised at how warm it was. As I write this very late in the evening, it’s a little bizzare to see the current conditions reporting 45F with a forecast low of 28F (but temperatures supposed to rise throughout the night). It seems like there was some sort of mistake there.

I took a few minutes after Tlingit class at the middle school to take pictures of a fungus Paul had found a couple of days ago. I suspect it’s something I photographed before, but wasn’t sure. It seems good for Annulohypoxylon multiforme, a species that hadn’t yet been added to the natural history wiki. I added it there and included my photo. It marks the 1000th species I’ve documented that way in the wiki. After starting my first attempt at a 1000 species project back in 2007 and a more concerted effort (plagued by disorganization) in 2012, this is the first time I’ve actually made it to 1000 species, so it’s a nice milestone for me. To be sure, I probably documented over 1000 species in 2012 (but it will require getting through the 8000+ photos from that year to be sure), and I’ve certainly taken pictures of well over 1000 species, but it’s nice to have 1000 named things under my belt. Perhaps the next 1000 will go a bit faster. I’ve already made a start, adding the 1001st (Hypomyces aurantius later in the evening.

Incidentally, Paul is doing a 1000 species project this year. He is doing much better than I did (in 2007 or 2012) at keeping observations organized, making good use of iNaturalist, a very useful tool. You can follow Paul’s progress. 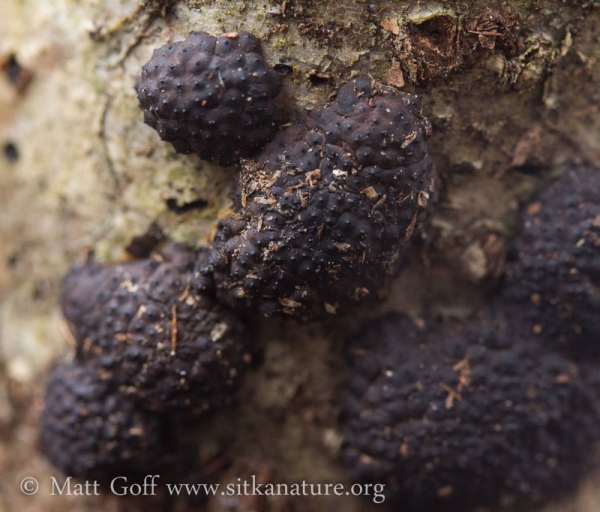