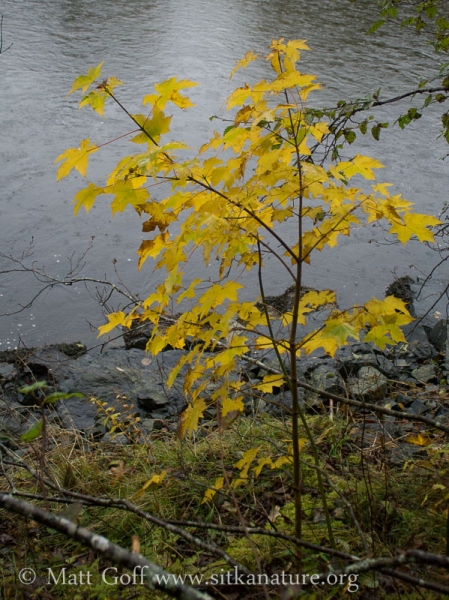 Photo from 2009 of maple along Indian River

Outside time today was limited to a walk around Totem Park this morning and a sit on the step this afternoon. I hoped to find the Spotted Sandpiper, but didn’t. During my sit, the female Anna’s Hummingbird once again visited under the porch step where I was sitting. I wouldn’t think there were enough insects and/or spiders under there to keep her coming back so many times (presumably she’s also visiting when I’m not sitting), but I don’t really know what she’s doing under there, I guess.

I got a report of a Sharp-shinned Hawk tangling with a Northern Flicker in the park. The flicker was able to get away when the hawk was distracted by the approach of the observers who were walking around on the trail. It seems pretty ambitious for a young hawk (I saw pictures of it) to go after a flicker, and it makes me wonder if it’s the same one that got the pigeon in my yard recently.

I also spent some time working on old photos, mostly from 2009. I was interested to come across the one at the top of this post, mostly because of what I said in a June 2014 post about never having noticed it before. Clearly I had, and had taken a picture even, but that fact had apparently left my mind in the intervening nearly 5 years.