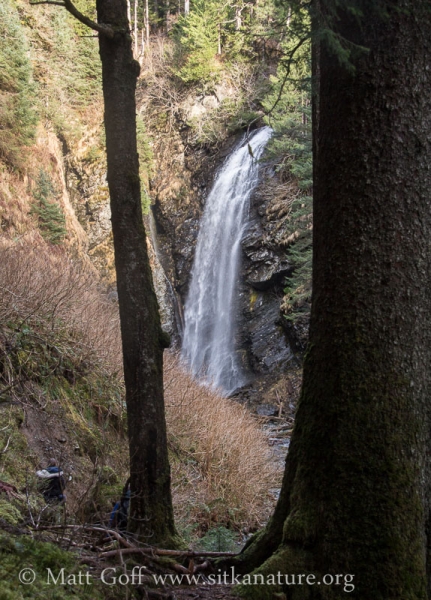 After not visiting Indian River falls for at least a couple of years, I have managed to make it up there twice within a couple of weeks. Today I took Connor and Rowan up for their first visit to the falls. Connor has long been game to get up there, but Rowan has a certain amount of resistance to the idea of hiking (though she generally enjoys the actual trip). In the end, Rowan led pretty much all the way up and all the way back with very little complaint. It seemed to help that on the way up we stayed pretty well spaced, during the last mile or so when I was walking right behind her, she had more to say (it also didn’t help that it was uphill there).

The clear skies of the past couple of days have resulted in frosty conditions. Some of the boards and logs along the trail were quite slippery. I think they’ll be even worse tomorrow, as the frost melting from the trees was dripping and freezing on the already icy. It was strange how much warmer it felt up the valley. It’s hard to be positive that it wasn’t just an effect of being warm from hiking, but since it felt colder again lower down on the way back, I suspect it was a real temperature difference.

It was quiet along the trail. I heard a few juncos, chickadees, and kinglets at scattered points along the walk, plus a few Varied Thrushes flew up in front of us, but overall there was little bird activity. I was a little surprised there wasn’t anyone in front of us, but as we started back from the falls, we passed the first of several sets of people heading up the trail. There was a group of four that were headed down the rock wash, so I let them know they had missed the trail, but the falls were not far away. Down near the Billy Basin bridge we passed some folks carrying equipment to do a little panning for gold. I mentioned that the mine had been up off the trail not too far from where we were, and it sounded like they briefly considered going that way, but decided to continue up the trail instead. Connor (who passed them a short time later, as he was trailing me by a little bit) said they asked him how far the falls were, so perhaps that was their ultimate destination.

We made good time for the trip, better than I expected. It took us right at 2 hours to get up, and just over an hour and a half to get back.

On the way to the trail we briefly saw the Wood Duck, but we did not see it when we check on the way back. 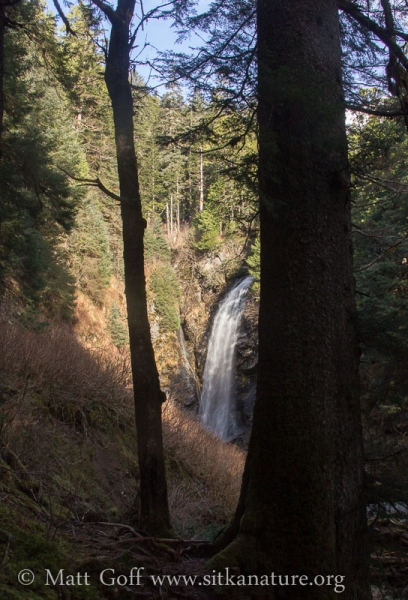