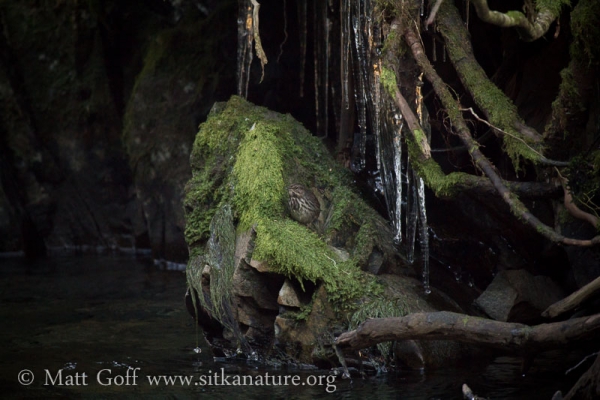 Song Sparrows are not an uncommon bird around Sitka. Although they are present throughout the year, it’s not clear how many (if any) individuals are actually present year-round. It seems like pretty much any area along the road system with a sufficient amount of brushy vegetation will host at least one Song Sparrow. They are also common along the water where there is brush or other sorts of acceptable cover (this includes breakwaters and harbor floats).

While easy to find in these sorts of places, I’ve never really observed them elsewhere, even where there is the sort of dense brush that they seem to favor in town. That being the case, I was a little surprised on a late November outing along Indian River trail when Connor said he had seen a Song Sparrow up ahead (we were probably close to a mile up the trail). I questioned him about it, and he was pretty confident, so I said lets try and find it to document. Fortunately between him, Rowan, and me, we were able to refind it and each managed to get some photos as it moved through the thickets and along the river bank. I’m not sure how frequently Song Sparrows utilize this sort of habitat, but it would be easy to overlook them, especially in the winter when they tend to be quiet and hang low. 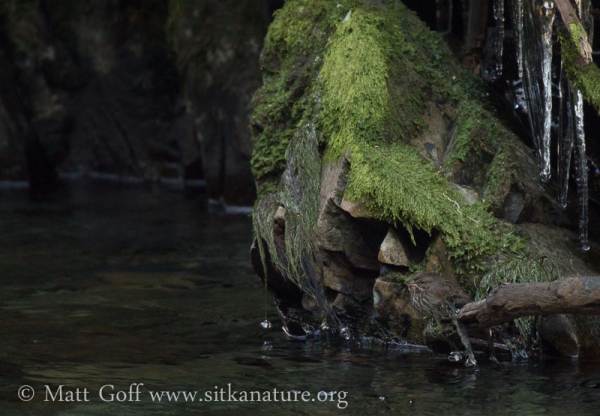