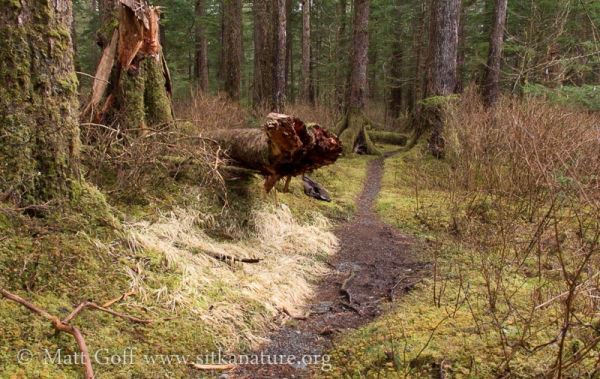 While walking back from Indian River falls yesterday, I noticed a patch of grass along the trail. That in and of itself is probably not such an unusual thing, but it stood out to me because of how dense the grass was where it was growing, but how limited the area was. In the photo that leads this post, the grass patch is the yellowed vegetation on the left side of the trail. The rest of the non-trail ground is pretty much covered in moss. To the right of the image, there was a sizable gap in the canopy where a tree or two had fallen sometime in the past.

It seems likely the grass is taking advantage of the increased light, but it seems just as likely that the increased light is more widespread than just the area the grass covers. Perhaps on the right side of the trail the salmonberry bushes keep things shaded enough. In conversation with my hiking partner, we also considered the ground might be better drained on the left. Also, the grass maybe growing via rhizome rather than seeding, so once the initial plant was established, it’s spread from there, but the foot traffic along the trail is sufficient to keep it from spreading across to the other side. The initial seeding could have been from a seed that drifted in, or perhaps one that came in with the gravel that was placed along the trail.

Whatever the reasons, I enjoyed considering what the reasons might be for what I observed here.