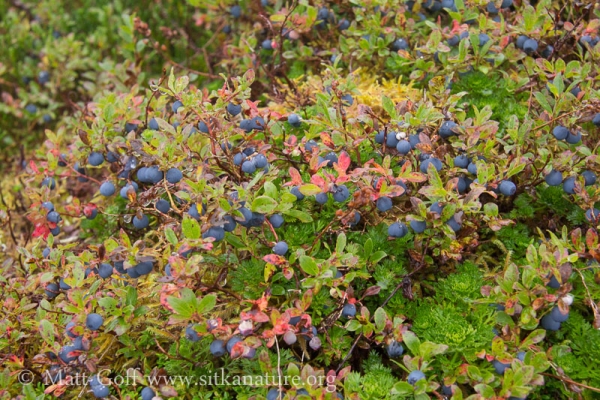 My breakfasts tend to be simple, toast and a bowl of fruit. This morning’s fruit was stewed dwarf blueberries (Vaccinium cespitosum) that had been picked last summer or early fall. The distinctive flavor that came with that first bite brought feelings of warmth and gratitude along with blurred impressions of that place and my experience there. I think I was a little surprised by this, and gave a moment or two to recollect the two picking trips I made (to the same place) this year, one with my dad, the other with my kids and brother.

It didn’t take long for my thoughts to turn towards the rest of the day, but that evening, spurred by the morning’s experiences, I thought I would share some memory food with my kids. We got out more of those same kind of blueberries and some whipped cream. Before we ate them, I asked them to share with me their memories of that trip to pick berries we made together with their uncle. It was interesting to hear their recollections, some things I remembered when they mentioned them, others that I didn’t recall at all. I was a little surprised at their enthusiasm in sharing their memories, though perhaps I shouldn’t have been (they are motivated by dessert), and I’m glad I felt inspired to do this with them. I shared some of my memory of that trip with them, and we enjoyed the berries and cream together.

As I write this later, it occurs to me that we also ate some seaweed we gathered during dinner. I hadn’t made the connection while we were eating, but during dinner we ended up talking about where the seaweed came from, as they were both on that gathering trip back in early April.

In the work I’ve done with 8-shields over the past several years, there have been various routines and/or practices that I have learned about where food and stories are wrapped together. I recall hearing about a hunter-gatherer group for whom the story of the hunt was as important culturally as the food that resulted from that hunt. Every year in the fall, I’ve heard about various ancestor honoring traditions, usually centered around food (often with the addition of a fire) and stories that go along with it.

In reflecting on today’s experiences, I feel like I’ve made a connection for myself (though whether I hold on to it remains to be seen). Although I grew up in a family where a significant portion of the food we ate was grown, caught, shot, or gathered, sometimes even with my participation, I do not recall consistently experiencing eating of that food linked with the story of that food, at least not in a way that stuck with me as a practice (though now that I’m thinking back, I do remember some stories going with food, at least on occasion).

I now find myself wondering about the power of eating stories instead of just food. I feel like there is probably something to be gained through this practice. Ingredients that are grown or gathered by ourselves or people we know, and the story of how it came to our plate. Food that has a connection with people or places we’ve known (or would like to), even if we don’t necessarily know the stories of those particular ingredients. I wonder how I can make stories a greater part of my meals. If you have thoughts/ideas, or your own experiences to share, please leave me a comment.