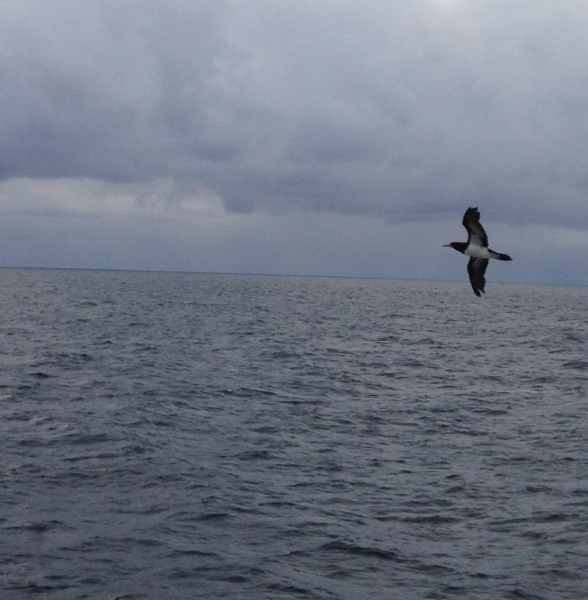 I was forwarded an interesting report from the Gulf of Alaska near 56N 148W (much closer to Kodiak than Sitka) of a Brown Booby seen and photographed by Justin Smith late in the afternoon on 28 October (the day before the one landed on the fishing boat near Sitka). I don’t know how fast/far a Brown Booby can fly, but it seems unlikely that this bird is the same as the one brought in to Sitka.

About the bird, Justin said:

I wonder if this bird had hitched a ride on a ship. In fact, there was a large container ship in the area when I saw it. Asian ships are fairly common in the Gulf, since it is on the great circle route from the west coast of the Pacific. On a trip I once did in the tropical Pacific, we had dozens of brown boobies on board for several days.

I had heard there were a couple of previous reports of Brown Booby in Alaskan waters on (or at least associated with) ships. I do not know if this year’s birds had a ship assist to get here, or if they just came north following the warmer than normal sea surface temperatures and/or got caught in some storms and ended up much further north than optimal. If both were ship assisted, it makes me wonder if this is a fairly normal thing, that just usually isn’t noticed (perhaps due to the birds staying with ships as they go back south). In any case it’s interesting that there were two in as many days. I imagine the state checklist committee will at least consider whether the species should be added, so it will be interesting to see what they decide. 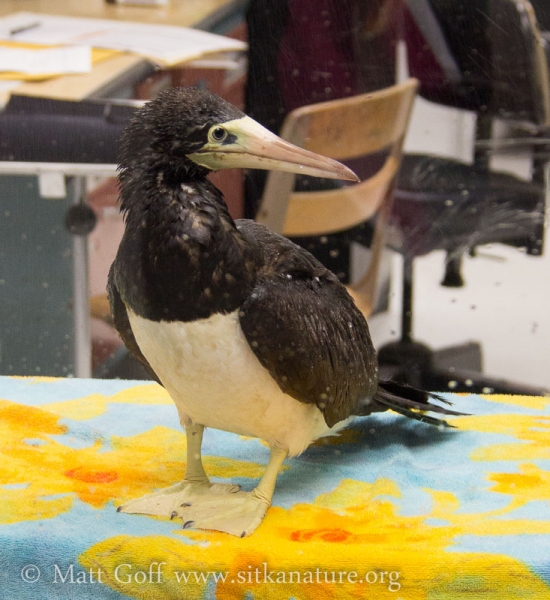 The rescued bird (named Jeri by the crew of the fishing boat she came in on) is doing well. She has gained a significant amount of weight eating strips of herring provided. She was well enough that folks were able to see her for a little while at the raptor center during a feeding and cleaning (apparently she is a bit of a messy eater).

She was brought out wrapped in a blanket and weighed before being placed on a table (all behind glass from the folks there to watch). Not as big I was thinking, it was fun to see her alert and feisty on the table. She seemed to enjoy getting spritzed with water and shaking herself off. We were told that as soon as the permits are acquired she will be shipped south to a rehab center south of Los Angeles, and then released from there.

Thanks to the Alaska Raptor Center, Jen C. and Dr. Vicki for inviting us to view the bird. Thanks to Nat D. for forwarding Justin’s observation, and to Justin for his permission to include it. 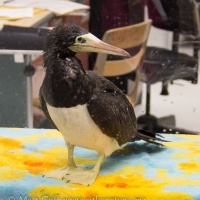 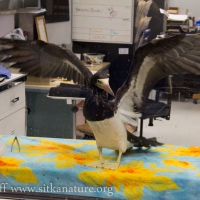 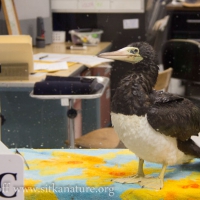 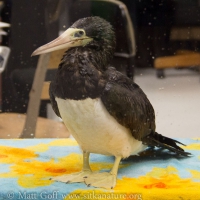 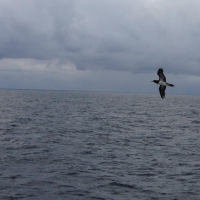