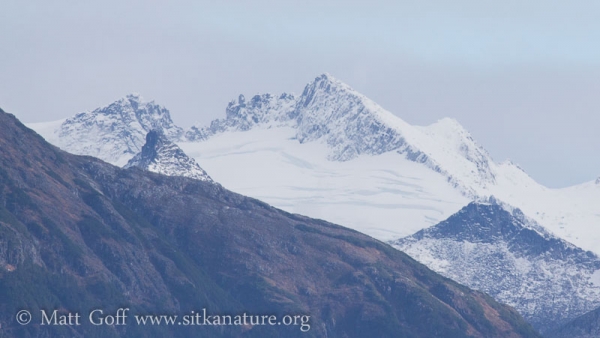 Last week I went to a presentation put on by the group that would like to protect a collection of E.W. Merrill glass plate negatives by purchasing them from the remnant of Sheldon Jackson College and donating them to the Sitka National Historical Park. Part of the display were many prints that people had and brought in, including one that showed the high peaks of Baranof Island. I wish I had taken a picture of it with my cellphone, but as best I can remember it appeared to be taken from Cross Mountain. I recognized the shape of the ridges, an one of them was the jagged ridge that drops off from the highest peak towards the left in the picture above that I took today.

What I remember less clearly is how far up along the ridge the snow/ice extended. I think I remember the saddle on the jagged ridge being still underneath the ice cap, and if so, that would suggest a significant amount of melting over the past 100 years. This wouldn’t be surprising, but it would still be nice to have a visual comparison with the Merrill photo. I am hoping it will be on display again at a second presentation they’re planning to do in November.