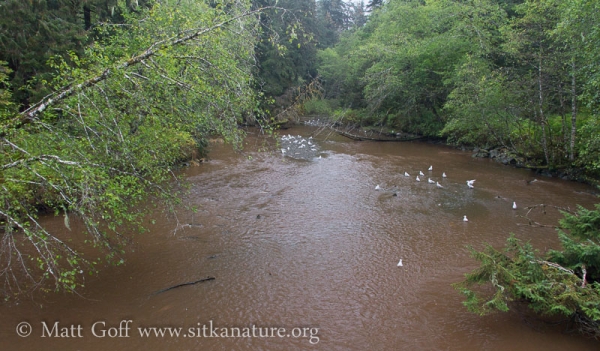 We went out to Starrigavan to walk the estuary and see if any birds had been blown in by the weather (windy and wet – though temperatures were back up near 60). There were several thrushes (robins, varied, and hermit) at the Old Sitka parking lot, but other then gulls and a few ducks, it seemed mostly fairly quiet. Perhaps part of that was just due to the wind and rain keeping things hunkered down. After initially seeing it from the footbridge over Starrigavan Creek, Connor and Rowan spent a little time trying to get in a position for better pictures of a Belted Kingfisher, but it didn’t cooperate too much. While they were doing that I walked down the road and got some pictures of gulls. One in particular seemed like it must be one of the HerringXGlaucous-winged Hybrids that are probably not that unusual around here (though I don’t know of anyone here in Sitka who has spent enough time studying the gulls to say for sure).

I was interested to see Starrigavan creek running muddy. I wonder if there was additional slide activity, or perhaps some of the mud washed out from the slope(s) of the slides that occurred last month. 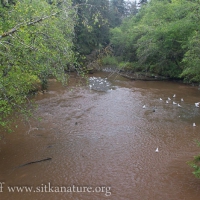 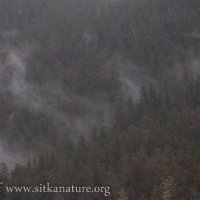 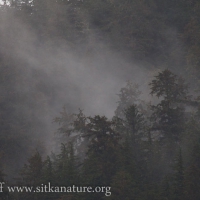 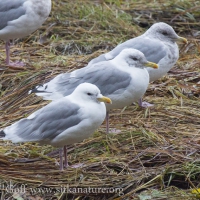 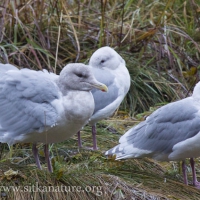 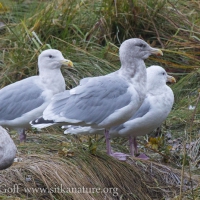